The Turkey-backed Free Syrian Army is racking up serious sums of money from fees it charges at border crossings in northern Syria. 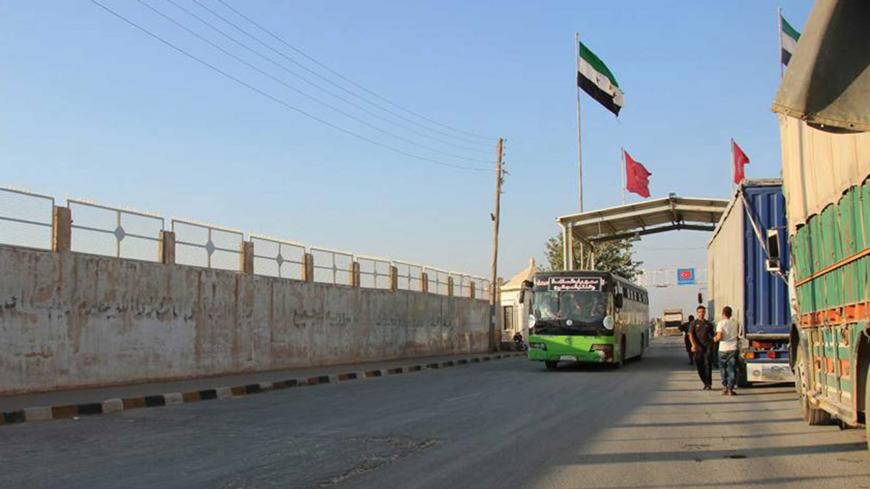 The Bab al-Salameh border crossing between Syria and Turkey, seen in an image uploaded Aug. 27, 2017. - Facebook/BABALSALAMAH1

ALEPPO, Syria — The Free Syrian Army and its factions are making lucrative use of the many border crossings they control in areas around Aleppo. The large financial resources they reap enable the factions to recruit and train new fighters and build new training camps.

The areas, liberated from the Islamic State (IS) during Turkey's Operation Euphrates Shield, have numerous external crossings with Turkey in the north and internal crossings connecting FSA areas with those of the Kurdish People's Protection Units (YPG) in Afrin and Manbij.

These crossings are lifelines for northern Syria, particularly the city of Aleppo, as they facilitate the movement of people and goods.

The liberated areas are home to three external border crossings with Turkey. Bab al-Salameh border crossing, some 5 kilometers (3 miles) north of Azaz, is among the most active in terms of exports and imports.

Al-Jabhat al-Shamiya (the Levant Front), one of the largest FSA factions in the liberated area, controls the crossing and allows a range of goods to enter from Turkey such as food, construction materials, clothes, cars, medicine, fertilizers and other industrial goods. The Levant Front, however, refuses to reveal the volume of goods that pass through the crossing.

Imports more than cover the needs of the FSA-controlled area; the rest go to northern Syrian areas where control is split between the YPG and President Bashar al-Assad’s regime. Meanwhile, some agricultural crops such as wheat, lentils and cotton are exported to Turkey.

The Jarablus border crossing ranks second in terms of imports and is protected by members of the FSA-affiliated Ninth Brigade Special Forces.

“The Jarablus crossing is dedicated to imports [and] is very active," crossing director Abdel Nasser Jalal told Al-Monitor. "The crossing administration provides great [services] to merchants, including the reduction of customs on imported goods.”

Turkey intervenes directly in Jarablus crossing affairs and has reduced taxes to promote trade, unlike the Bab al-Salameh border crossing, where the decision to impose taxes is in the hands of the Levant Front.

“Customs revenues fund public services in the city of Jarablus. The funds are transferred to the local council treasury," he said. "There is no specific monthly amount of customs revenues." At Bab al-Salameh, the profit goes directly to the Levant Front.

Abdel Rahim Mastou, a vegetable vendor from Jarablus, told Al-Monitor that services in the city are constantly improving.

“The local council is repairing all the [war] damage to the sewage and water networks. Electricity is coming from Turkey at cheap prices,” he added.

Jarablus is the only city in the liberated area with a direct supply of electricity; other cities there rely on diesel-powered generators.

Al-Rai, the third crossing with Turkey, is protected and supervised by the FSA-affiliated Sultan Murad Brigade. Currently, its use is limited to the entry of relief materials by the Turkish Disaster and Emergency Management Authority (AFAD) to the liberated areas. The Turkish government upgraded the crossing's classification in May so that it eventually can receive miscellaneous goods.

“No trade operations have been carried out at this crossing as of yet, as those in charge of the crossing are waiting for Turkey’s green light to officially inaugurate the crossing. But preparations have been finalized, and it might start receiving and sending goods [soon]," crossing security director Firas Mohammed told Al-Monitor.

Al-Shat crossing in western Azaz is deemed a humanitarian crossing; civilians circulate between there and Afrin. Em Jlud and Aoun al-Daddat crossings connect the FSA areas with Manbij.

Internal crossings are controlled by a number of FSA factions: the Levant Front, the Islamist Ahrar al-Sham movement, Jaish al-Shamal, Liwaa al-Shamal and the Sultan Murad Brigade. "These factions are reaping more than $1 million a month in customs imposed on goods destined for YPG-controlled areas. These funds are shared among the different FSA factions,” Salem said.