Hundreds of Syrians displaced from Tell Rifaat and its surroundings are demonstrating for the right to return home and for opposition forces — not the regime — to control the area. 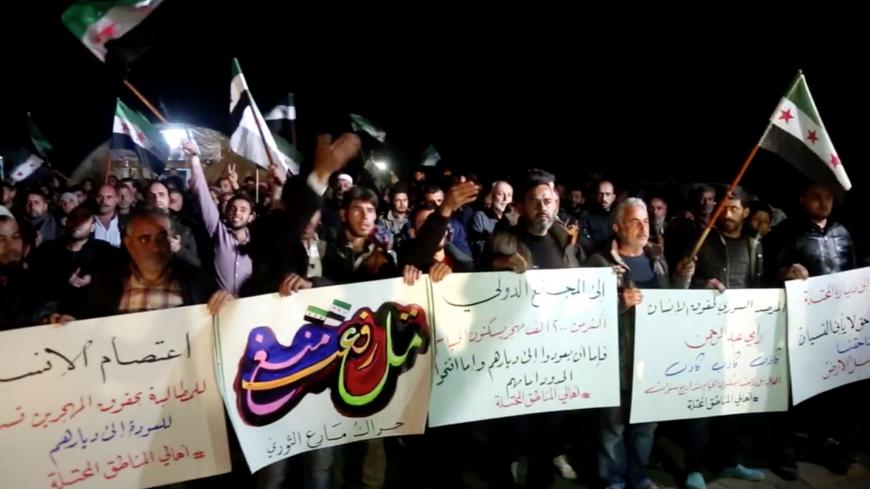 Displaced people from the city of Tell Rifaat and surrounding villages and towns protest near the Bab al-Salameh border crossing, Syria, seen in a still from a video uploaded Nov. 12, 2019. - Facebook/tallrefaatcity

ALEPPO — For weeks, displaced persons from Tell Rifaat and surrounding towns in Syria have been protesting near the Bab al-Salameh border crossing with Turkey in northern Aleppo province, demanding they be allowed to return to their areas, which have been under the control of the Kurdish People’s Protection Units (YPG) since February 2016.

The displaced from Tell Rifaat and more than 40 other towns, villages and ranches including Tell Qarah, Kafr Naya and Shaykh Issa, have been living for years in camps north of Azaz, in Sajou and around the Bab al-Salameh crossing. Bachir Aleito Abu al-Kheir, head of the Tell Rifaat political office, told Al-Monitor more than 100,000 people were displaced from the area.

The protests follow an Oct. 22 agreement between Russia and Turkey regarding a safe zone in Manbij, Tell Rifaat and the area of Syria east of the Euphrates. The deal allows Syrian regime forces to take control over all these areas from the YPG, which is supposed to withdraw. Russian and Syrian regime forces are present there, but the YPG still retained control as of Nov. 19.

The deal says all YPG members and weapons shall be removed from Manbij and Tell Rifaat, but the pact didn't guarantee that the displaced or the armed opposition could return.

The protesters set up a rally tent Oct. 30 in Sajou, near the border crossing. Hundreds file in and out of it every day. Protest organizers stress the displaced people's right to return home and reject international agreements that don't guarantee it.

The displaced held mass demonstrations near the crossing Oct. 31 and Nov. 1. Hundreds of displaced persons from Tell Rifaat protested Nov. 8 and held a night demonstration Nov. 12.

On Nov. 8, Al-Monitor headed to protests near the crossing, where people had gathered in a vast square following the Friday prayer. The protesters raised the flags of the Syrian revolution, along with Lebanese and Iraqi flags in solidarity with the protests in those countries.

When the protest was over, Al-Monitor went to the tent, where dozens of displaced men and youths were present. Banners and Syrian revolution flags hung on the sides.

Organizer Sajed Al-Shamaliy told Al-Monitor, “You will see men and youths in the protest camp whenever you come here, be it at night or during the day. The night protest is currently being prepared, where hundreds of displaced will be inside the [camp] to stress their demands.”

Amr Abu Jana, who was displaced from Tell Rifaat, stood near the border crossing. He told Al-Monitor, “We cannot relinquish our right of return to our homes. The Russian-Turkish deal needs to explicitly point at the withdrawal of the YPG from our areas and the return of the [Turkish-backed] Free Syrian Army [FSA] opposition factions to these areas for us to be able to return. The deal did not underline such a thing. [If] the YPG withdraws, the regime forces will replace them. We reject [the possibility] that regime forces [will] control our areas.”

Yahya Mayo, media coordinator of the FSA’s Syrian National Army (SNA), told Al-Monitor, “On Nov. 1, a Turkish security delegation met with organizers of the protests and demonstrations near the Bab al-Salameh border crossing to hear their demands. The organizers demanded an explanation of their area’s fate once the YPG withdraws, as stipulated in the Russia-Turkey deal.” Mayo said the protesters sent a six-member delegation to Turkey Nov. 3 to meet with political and security officials there.

Delegation member Abu al-Kheir told Al-Monitor, “The Turkish delegation denied any deal with Russia relating to the entry of regime forces in Tell Rifaat. Rather, the deal only sets forth the YPG withdrawal. … The Turkish officials told us there are currently talks with Russia on the fate of Tell Rifaat and surrounding towns … and that major efforts are being made to get the displaced back to their areas.”

He added, “We delivered to the Turkish officials the protesters’ message that they need to return home nearly four years after they arrived in the camps, and that the regime forces’ entry into the city is unacceptable. There will be no stability and no citizens will ever return to the city if the YPG hands the city over to regime forces."

Speaking Nov. 11 to Al-Monitor, SNA spokesperson Youssef Hamoud confirmed, "So far, the Kurdish YPG has not withdrawn from Tell Rifaat … and has not held up its end of the Russian-Turkish deal, which requires them to withdraw 30 kilometers [18 miles] from the border area in northern Syria. Rather, they built up their presence at the battlefronts in Aleppo province.”