After well more than a year living under wretched conditions in refugee camps, thousands of displaced residents from northern Aleppo province hope to return home soon as the Free Syrian Army fights to reclaim towns from the Syrian Democratic Forces. 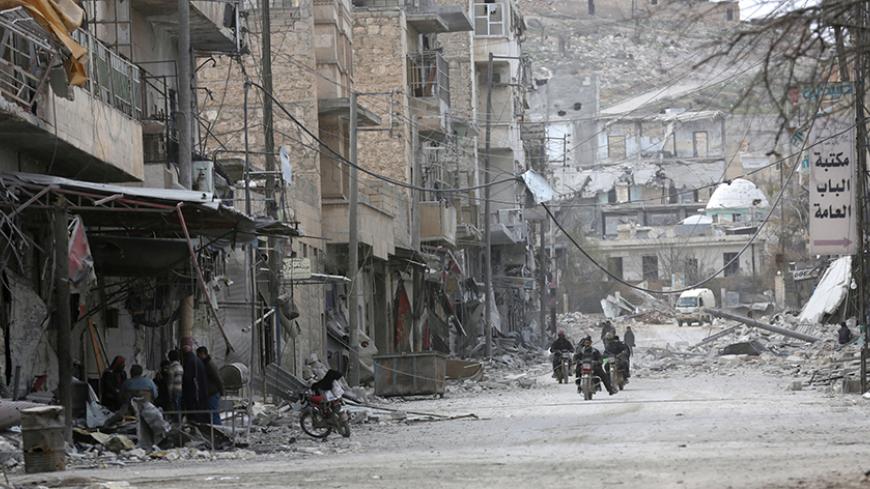 People ride motorcycles amid the rubble of damaged buildings in the northern Syrian town of al-Bab, Feb. 28, 2017. - REUTERS/Khalil Ashawi

NORTHERN ALEPPO PROVINCE, Syria — It’s been almost a year and a half since Abdullah Hilal has been at his house in Tel Rifaat, about 25 miles north of the city of Aleppo. Hilal and his family fled the town two days before it was seized by the US-backed Syrian Democratic Forces (SDF) in February 2016.

During the battle, the SDF — which includes Kurdish fighters — was also backed by Russian air power that carried out hundreds of airstrikes against Tel Rifaat and other areas held by the Turkey-supported rebels of the Free Syrian Army (FSA), displacing thousands of civilians from their towns and villages.

Due to the intensive Russian aerial bombing and artillery shelling by the SDF, Hilal, a father of four, was forced to leave his house.

“I did not fear for my life or physical safety. I feared for my children," he told Al-Monitor in a recent interview in Bab al-Salam refugee camp, near the Syrian-Turkish border. "I still remember the day we left Tel Rifaat. Intense fear prevented us from bringing the essential items with us. While moving my things, my children cried out for me to hurry up, while a warplane was flying over.”

Hilal is not yet willing to move out of his small tent, despite the scorching sun and miserable conditions in the camp, where residents have been going through hell. But he hopes the situation will change before long.

“I have the feeling that I will soon return home. We have endured a lot in Bab al-Salam camp," he said. "There is no drinking water and electricity, and there is no way to work and have a decent life. We have experienced … humiliation during displacement. Enough — We want to return home.”

More than 100,000 people who have been displaced from towns and villages in northern Aleppo province are in camps in Bab al-Salam, al-Nour, al-Iman and Sajou. They are all eager to return home and hope it will be soon. Their hopes have been raised by accelerating developments on the battlefront in Aleppo, intermittent clashes between the FSA and SDF, and the exchange of shelling. The Turkish military has mobilized in the countryside and near the border to take Tel Rifaat and nearby towns from the SDF.

Ibrahim Mohammed, who is from Sheikh Hilal near Tel Rifaat, told Al-Monitor, “My family and I cannot return to our village unless it's liberated from the SDF. The village is now unpopulated, similar to Tel Rifaat, Sheikh Issa, Harbal and other villages whose people cannot return. Less than 10% of the people in areas seized by the SDF managed to return to their towns, such as Kafr Naya and Deir Jamal. The rest of the people are still in the camps.”

Several attempts at negotiations sponsored by the US-led coalition took place between the FSA and SDF to ensure the SDF's safe withdrawal from Tel Rifaat and nearby towns. However, the FSA said the SDF wasn't serious about withdrawing, despite the US-led coalition's recommendation. The Tel Rifaat Military Council announced that negotiations had failed and a military option was the sole solution. Since then, the situation between the FSA and SDF has escalated on battlefronts in northern Aleppo.

Abdel Ghani Chawbak, the official spokesperson for the Ahl al-Diyar operations room, told Al-Monitor, “We have striven to reach a peaceful solution with the SDF to prevent bloodshed and restore areas via negotiations, as well as to help 100,000 displaced [people] to return. The SDF, however, thwarted the endeavors to bring about peace. It is the right of the thousands of displaced to revolt against those who occupied their land. The right to liberate the land is internationally recognized.”

He continued, “Ahl al-Diyar consists of a popular resistance operations room, and is not affiliated with the FSA. It is a popular liberation movement from the camps, consisting of people hailing from SDF-occupied areas. Members of this operations room desire to restore their occupied towns and villages, which is the only remaining option.”

The drums of war between the SDF and the Turkey-backed FSA have picked up tempo in northern Aleppo since early July. On July 4, the Kurdish People’s Protection Units (YPG) — which plays a large role in the SDF — called on the public in YPG-controlled areas in northern Aleppo to take to the streets to protest offensives against them. Salih Muslim, the co-chair of the Kurdish nationalist, US-backed Democratic Union Party (PYD), warned July 5 that areas in northern Aleppo and Afrin will be handed over to the regime of President Bashar al-Assad if attacked.