Some Syrians support Turkey's military operation in Afrin as it could provide an opportunity for them to return home, but others fear Turkey's intentions are far from noble. 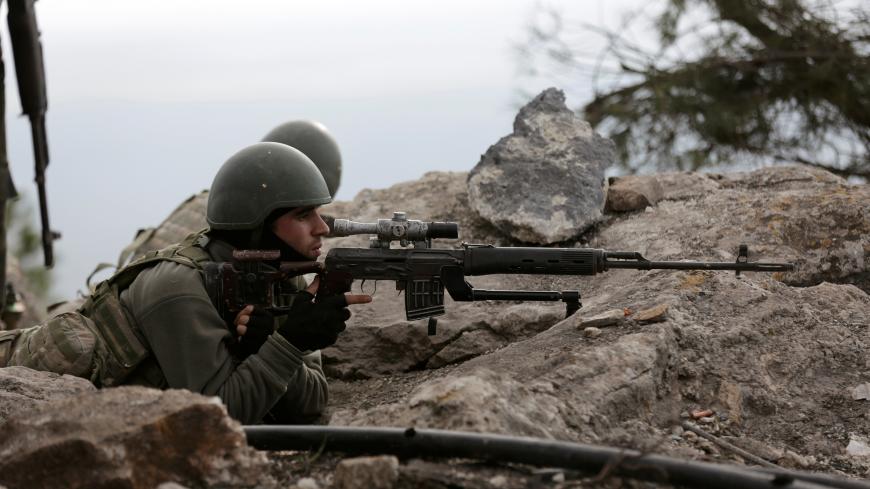 Clouds of smoke rose from several locations on the mountain, 5 kilometers (3 miles) west of the crossing. The mountain, which overlooks the town of Azaz and the Turkish city of Kilis, had been controlled by Kurds of the Democratic Union Party (PYD) and its military wing, the People's Protection Units (YPG)

Free Syrian Army (FSA) factions supported by the Turkish army tried but failed Jan. 23 to take control of the strategic site. In a Jan. 28 attempt, however, the FSA took over the mountain and set up guard posts. FSA also expanded westward by taking control of Qastal Jendu village at the foot of the mountain.

Turkish military reinforcements entered Syrian territory from the Bab al-Salam crossing. The residents here, especially those living in the nearby camps, don't hide their support for the Turkish operation. Some of them even make signs of victory or wave their hands at the armored vehicles crossing into Syria.

They believe the operation is legitimate and in line with their interests. Others see it as unacceptable external interference.

Turkey launched the air and ground offensive Jan. 20 on Afrin, in northwest Syria, against the Kurdish Syrian Democratic Forces (SDF) and that group's main component, the YPG. The action has revealed a well-defined split in the Syrian public between supporters and opponents of the operation.

Al-Monitor headed to Saju refugee camp, 2 kilometers south of Bab al-Salam crossing. Internally displaced Syrians live here in tents that fail to shield them from the cold winter. The camp roads, unpaved, are mired in mud after two weeks of rain.

Ahmed Aliawi lives in the camp. The Turkish operation gives him hope that he might soon return to his town of Deir Jamal northwest of Aleppo. “I was overjoyed. As soon as I heard about the Turkish operation, I knew that my family and I could go back to our hometown. That’s all I care about,” he told Al-Monitor.

His town, along with about 20 others in the area, was seized two years ago by the YPG, backed by the Russian air force. Tel Rifaat, Meng and Harbel were among those towns.

Tens of thousands of Arab residents fled the area, settling in squalid, makeshift camps on the Turkish border and blaming the YPG for their situation.

“I can’t wait to go back home,” Aliawi said. “We've had our share of humiliation and oppression in the camps over the past two years. I don't know how our home will be when we return, [but] living in the ruins of our home is better than living here.”

Most of the displaced Syrians in the Saju camp show clear support for the Turkish offensive. However, other Syrian citizens, especially in Afrin, oppose it.

The mountainous Afrin region comprises about 350 towns, most notably the cities of Afrin, Janders, Bulbul, Sharan and Raju. With a Kurdish majority, the region had remained basically immune from war since the outbreak of the Syrian uprising in March 2011.

Media activist Shero Alo, who comes from the city of Afrin, sees the Turkish military operation as tantamount to occupation. He covers, online, the humanitarian developments in his hometown from his current residence in Germany.

“Of course I am against this operation. I want to break free from the control of the PYD that violates human rights. This, however, does not mean lining up with the Turkish government, which represses its Kurdish citizens and prohibits Kurdish political activities,” he told Al-Monitor. “How could I praise an operation that will take us from bad to worse?”

Turkey's military says the operation aims to remove “terrorist groups,” referring to the Islamic State, but also to the PYD and YPG because they are considered the Syrian offshoot of the banned Kurdistan Workers Party in Turkey.

However, Alo and many others believe the battle is being waged against Kurds and is part of a historical nationalist conflict Ankara is fueling to prevent the Kurds from establishing an independent state.

Alo, who is of Kurdish descent, said, “Turkey is leading the offensive on Afrin. Meanwhile, the number of Kurds participating in the attack within the FSA factions is very limited. This doesn't give us any guarantee or sense of relief.”

He emphasized that Arab residents who were ousted from their towns in northern Aleppo by the YPG certainly have the right to return there. But he fears there will be many battle casualties, noting that as of Jan. 28, 34 civilians had been killed already. "Afrin Hospital alone registered 49 injured. The humanitarian situation is very difficult. There is no safe place," he said.

Syrian intellectuals seem to have a more moderate leaning. As they see it, the heated debate over the offensive offers a chance for dialogue and to recognize the rights of others.

Burhan Ghalioun, a Syrian scholar and prominent opposition activist, criticized in his blog the emotional turn taken by the debate over Turkey's operation. He described it as fomenting hatred and xenophobia.

He called for “a genuine internal dialogue that ensures harmony between the legitimate demands of the Kurdish community and the Syrian people’s interests, [one] that preserves Syria’s unity, independence and sovereignty; that contributes to Syria’s reconstruction on a sound democratic basis; and that guarantees cooperation in eliminating all foreign forces and militias from the Syrian territory.”