As Turkey’s offensive against Kurdish forces in Syria nears the end of its first week, circumstances affecting the scope, progress and duration of the operation are complicated and full of risks. 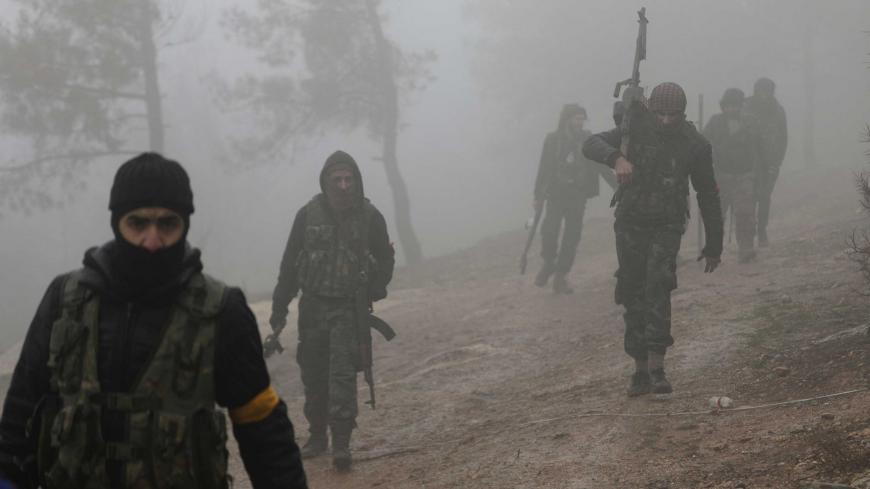 Turkey's latest incursion into Syria has just begun, but the significance of when it will end deserves attention now. By the end of the fifth day (Jan. 24) of Ankara's operation targeting Kurdish control of Afrin, the Turkish army and its allied local forces, along with the close air support of Turkish warplanes, had reached about 7½ kilometers (4½ miles) into Syria from six beachheads and captured at least 11 villages. Now there is a new front at Mount Barsaya north of Azaz, where heavy clashes continue.

Contrary to general expectations, the operation was not launched from the relatively flat terrain of the Azaz/Tell Rifaat/Afrin line, but from the opposite direction, crossing hilly terrain in the north and northwest. The Turkish Armed Forces (TSK) first want to seize the dominating hill features and then lay a long-duration siege on the city, which has a population of 200,000. The TSK’s strategy seems to be to open multiple front lines in different areas to disperse the 8,000 to 10,000 troops of the Kurdish People's Protection Units (YPG) and weaken their defense lines.

Unlike the earlier Operation Euphrates Shield (August 2016 to March 2017) that Turkey launched as a special forces operation, the Afrin effort began as a conventional armored movement. I’m inclined to define the Afrin effort as Turkey’s second “effect-based operation,” after Euphrates Shield. An effect-based operation relies on complex security to obtain a specific political outcome or effect on rivals’ strategic preferences rather than eliminating the enemy altogether or disrupting its will to fight. The prime objective now seems to be to influence the strategic goals of other actors with stakes in northern Syria, particularly the United States and Russia. So rather than eradicating the 8,000 to 10,000 YPG militants seemingly stuck in Afrin, Turkey wants to show it is a strong player capable of changing the operational environment.

Sources Al-Monitor spoke with in Ankara say political and security bureaucrats agree and are fully determined to expand the operation first to Manbij and then east of the Euphrates River to undermine US cooperation with the Kurdish YPG on the ground.

How long will the Afrin operation continue? As long as it takes to achieve its objectives, according to Turkish President Recep Tayyip Erdogan. After Afrin is cleared of the YPG and any militants that might remain, a new administration is to be installed with Turkey’s input. This process may last until the beginning of summer.

There are many factors that could affect the course of the Afrin operation.

Unlike the rest of Syria, the Afrin region is partially mountainous with an unusual density of trees. To these land features that limit armored movements we have to add the heavy rains and fog of January. The harsh weather and terrain conditions favor the YPG defenses.

Will the YPG refrain from frontal clashes and leave, or will it resist? If it resists, will it withdraw to the hilly terrain in the northwest? The YPG is making use of the mountainous terrain that restricts armored unit movements and airstrikes. Will it conduct guerrilla warfare or intensify its resistance under cover of the people congregated in city centers? The Islamic State frequently withdrew into the crowds of cities and at times even forced people to remain in the combat zone to protect itself from airstrikes and long-range artillery fire. If the YPG adopts the same tactic — and there are indications it may — there will be heavy civilian losses. The YPG may well use these civilian fatalities as a major propaganda tool against Turkey.

It appears Turkey had Moscow's go-ahead for the offensive, given that Russia controls all Syrian airspace west of the Euphrates River. Russia no doubt sees that the operation will drive a deeper wedge between the NATO allies Turkey and the United States in light of the latter’s support for the YPG. Moreover, Russia probably calculates that, faced with the threat of being overrun by Turkey and its Free Syrian Army (FSA) allies, the YPG will now be more open to Moscow's earlier suggestion of handing Afrin back to the regime of Syrian President Bashar al-Assad.

A key risk indicator will be whether Moscow provides Turkey with 24/7 access to the airspace over Afrin, or restricts the incursions, as was the case during Euphrates Shield. If it chooses the latter, Russia is likely to control the operation's tempo, synchronizing it with the Syrian army’s advances in Idlib province south of Afrin and any confrontation with the US-backed YPG forces around Deir ez-Zor over the control of oil reserves. This would allow Russia to give the Syrian army more time to consolidate its territorial control in Idlib province, bringing it into a better position to take over the remaining YPG-controlled areas in Afrin and gain the upper hand in Deir ez-Zor to keep the YPG under pressure.

Turkey, which has gone back and forth on the issue of whether Assad should remain in power, has been negotiating with Assad about possibly working together against the YPG and the Kurdish nationalist Democratic Union Party (PYD). But the Syrian president knows Erdogan's preference is an Assad-free Syria, so the Syrian army may end up assisting the Kurdish forces to an extent. Assad may decide to help evacuate the YPG units that appear to be squeezed in at Afrin, or help them receive reinforcements from east of the Euphrates. Still, another Assad policy could be to "wait and see," thinking that at the end of the day Afrin will be handed over to the government.

Another consideration is the capacity of the Ankara-backed FSA force. The fighters aren't the most dependable and could evaporate when faced with strong resistance, as happened at al-Bab during Euphrates Shield. That weakness could force Ankara to deploy more commando/infantry units to replace FSA units, increasing the risk of losing Turkish soldiers in urban warfare.

Then there is Turkish public opinion. Although there is no pertinent, reliable polling data, experience with Operation Euphrates Shield tells us the government won't have much problem securing public support for the Afrin offensive.

If Turkey can wrap up the operation quickly, say by August, the country is likely to retain its current socio-economic posture. However, the longer the operation stretches out, and the more territory it involves — especially if it leads to a confrontation with the United States — the more likely it is to harm Turkey’s economic and political stability and its social cohesion.

Will Erdogan and his personal charisma manage the current operation in his favor, accelerating his fast-track toward becoming Turkey’s first executive president? Or will the operation spiral into more than the country can handle, further damaging Turkey’s already fluctuating economic performance, crippling bureaucratic capacity and deteriorating ethnic, sectarian and social-political neurological points?