Stakes rise in Syria as Turkey clashes with pro-Assad militias

As Turkey’s forces approach the center of Afrin city in Syria, it is getting harder for Moscow to control events. 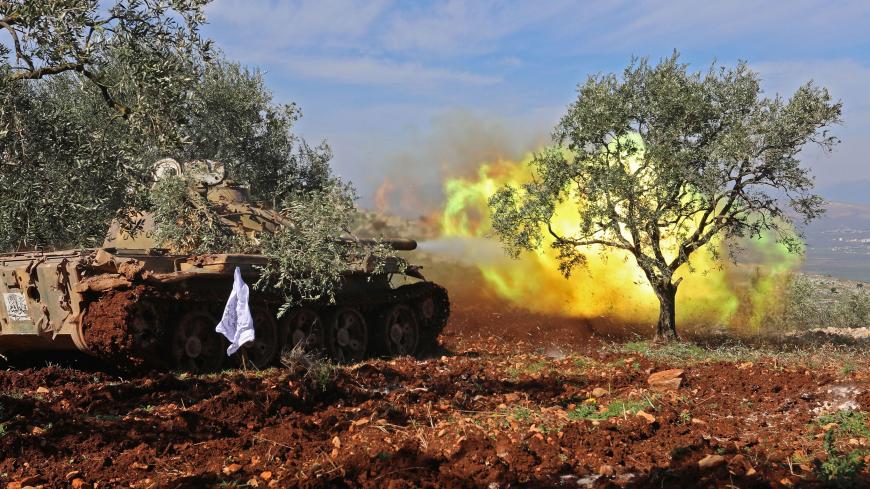 Turkey looks determined to march on the center of Syria's Afrin city by way of Jindires, a move that will shift Ankara's strategy from rural to urban warfare and that threatens a protracted, difficult battle.

Turkey’s gendarmerie and police special operations units on standby in Turkey near the Syrian border entered the Afrin district of Aleppo province during battles for the Jindires and Rajo areas. That movement indicates the operation’s focus will indeed turn from rural terrain to urban locations. On March 1, 80-100 Kurdish fighters of the People's Protection Units (YPG) attacked a Turkish gendarmerie detachment west of Rajo. The YPG elements infiltrated the area held by the Turkish Armed Forces (TSK) by using prepared tunnels and taking advantage of the dense fog that for four days had restricted air reconnaissance and close air support. Eight specialized gendarmerie noncommissioned officers and two fighters with the Turkey-backed Free Syrian Army (FSA) were killed, while 13 soldiers were wounded — five of them seriously.

There are lessons to be learned from this clash, which had deep repercussions for Turkey. First, heavy fog and adverse weather conditions are becoming a serious disadvantage for Turkish troops widely dispersed in the Afrin area. Moreover, although the YPG appears to have withdrawn from the Rajo area, it is capable of carrying out hit-and-run attacks by making use of mountainous terrain and poor visibility. This tactic is frequently used by the outlawed militant group Kurdistan Workers Party (PKK) in southeast Turkey and is bound to continue. The PKK has been fighting within Turkey to achieve Kurdish self-rule. Turkey considers the YPG to be the PKK's Syrian extension. The YPG plays a large role in the Syrian Democratic Forces (SDF) alliance, which the United States has backed against the Islamic State.

Turkish military-backed FSA units are nearing Jindires and the center of Afrin city, and the majority of civilians in those locations have not been evacuated. The YPG isn't allowing civilians in Jindires and central Afrin to leave and is using them as human shields, according to Turkey. Many YPG elements are fighting dressed as civilians.

After the loss of eight Turkish soldiers in Rajo clashes March 3, TSK and FSA elements captured central Rajo by launching a heavy assault supported by Turkish warplanes and T129 assault helicopters. Also, the TSK and militias supporting Syrian President Bashar al-Assad entered their first clash at Afrin. The Syrian Observatory for Human Rights, based in Coventry, England, reported that Turkish airstrikes in the area of Kafr Janna killed some 36 pro-Assad troops.

That first armed confrontation between the TSK and pro-Assad militias in northern Syria is cause for serious concern, especially for Moscow, because if the fight escalates to clashes between TSK and Assad's army — rather than just supporting militias — it could mean the collapse of de-escalation efforts west of the Euphrates. Moscow’s vision for northern Syria is clear. On one side of the negotiation table, Assad will sit as the big brother under Russian wings with the Democratic Union Party as the younger brother representing the Syrian Kurds, who must be pro-Russia, staunchly secular and leftist. On the other side of the table facing them will be the Syrian opposition, under the tutelage and control of Ankara.

This is why Ankara will have to quickly extract the Sunni opposition from radical jihadist groups, to give the opposition a more moderate outlook. That, in turn, requires eliminating the resistance in Idlib and consolidating the Sunni opposition under a single political and military command controlled by Ankara. There is no place for the United States at this table Russia is setting. Entrenched US-SDF forces cooperating east of the Euphrates will have to be dismantled. Moscow hopes US-led Kurdish efforts to establish a permanent presence east of the Euphrates will crumble and the United States will be compelled to exit northern Syria.

Moscow has benefited from Turkey’s Afrin operation. Turkey is fighting the YPG directly, forcing the latter to seek help from Assad — and not from Turkey's ally, the United States — which in turn erodes Ankara’s tough stance at Afrin and will force it to sit at the negotiation table. Turkey will work to create a more moderate jihadist mobilization by forcing the Sunni opposition groups in Idlib to abandon the radical jihadis and unite under the Turkish-backed FSA, which then would weaken the resistance at Idlib. This would bring the quarrels between the United States and Turkey in northern Syria to a head in a crisis of confidence: Unlike Russia and Turkey, Washington considers all members of the Sunni jihadist groups a threat that needs to be eliminated, even if the more moderate elements separate from the radicals.

But developments on the ground show that as the Turkish operation moves closer to the center of Afrin, it is becoming increasingly difficult for Moscow to impose its will and manage the operation. The Turkish air force so far has refrained from bombing central Afrin and its periphery despite the fortifications and defensive works by the YPG and pro-Assad forces in the same area. That is a sign Russia is protecting Afrin's center.

But Turkey has intensified reconnaissance and target-acquisition operations in central Afrin and brought in new military units for urban warfare. That, combined with Turkish President Recep Tayyip Erdogan's incessant hawkish declarations, indicates Turkish plans to enter central Afrin no matter what the cost.

Assessing all these developments, I believe Ankara will make a major move to capture Afrin's center. At the end of the day, Moscow will determine the level of resistance. The fragile negotiation table Moscow is trying to set up is directly related to the fates of Afrin and the heart of Idlib city.

No doubt Washington prefers to maintain its relationship with the YPG (or, as the United States says, the moderate SDF) east of the Euphrates following dogged efforts to keep the conflicting parties of Ankara, Assad, the YPG and Iran at the same table. But the reality is, the moment Moscow feels a bit more comfortable west of the Euphrates, its first move will be to cut into the US-YPG effort. To that end, Moscow will need simultaneous input from Ankara and Assad. Naturally these two parties will have to avoid any hot clashes between themselves.

With the Syrian regime-supporting militias backing up the YPG in Afrin, 41 Turkish soldiers and 116 FSA fighters had been killed as of March 4, according to Turkish Defense Minister Nurettin Canikli. The Turkish military officially put the number of YPG fighters “neutralized” — killed, incapacitated, captured or surrendered — at 2,612.

Turkish media reported that as of March 4, 100 out of 306 Afrin villages had been seized, and FSA units supported by the TSK now control 25% of Afrin, including the towns of Rajo and Bulbul.