Indications from Ankara and the battlefield suggest Ankara is opting for urban warfare instead of a long siege on Afrin in Syria. 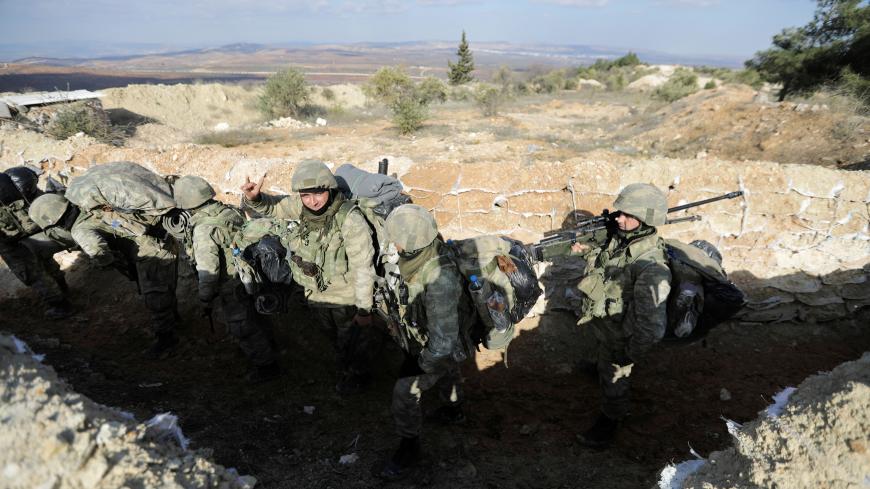 If Turkey's military operation in Syria's Afrin province proceeds at its current pace, Ankara will very soon have to make its most critical decision of the drive: whether to enter the center of Afrin city and conduct urban warfare, which could shorten the offensive but risk potentially heavy political-diplomatic risks, or set up a long-term blockade.

On Feb. 3, a Turkish Leopard 2 A4 tank was hit with a 9M113 Konkurs anti-tank guided missile that killed six soldiers — five in the tank and one near it. That same day, one soldier was killed in Afrin clashes and another when the Turkish border town of Kilis was shelled, making it the deadliest day yet for the Turkish army since the operation began Jan. 20 with the support of the Free Syrian Army (FSA). Two more soldiers were killed in clashes Feb. 4 with the Kurdish People's Protection Units (YPG). Official statements from the Turkish General Staff said 947 YPG fighters had been killed in the operation, while 13 Turkish soldiers were killed and 57 wounded.

Civilian casualties are reported on both sides. According to the Turkish government, 82 rockets had been fired from Afrin into Kilis and Hatay, Turkey, killing nine civilians and injuring more than 100. There are also reports of civilian losses at Afrin, which has been under heavy attacks by Turkish warplanes, assault helicopters and artillery and rocket fire.

The first phase of the operation moved slowly because of heavy rains and fog in its first week, but it is about to conclude. In this phase, Turkish tanks, armored vehicles and the affiliated FSA elements with close air support and intensive artillery/rocket fire entered the Afrin area from nine beachheads to disperse the YPG. These ground forces advanced 8-10 kilometers (5-6 miles), capturing dominant hills and critical villages on their routes. Terrain between these captured locations is slowly being cleared.

Will Turkey next choose to enter the city, whose regular population of 170,000 is said to have reached 500,000 as a result of internal migration? The Turkish military accumulated considerable urban warfare experience in battles between 2015 and 2017.

Or will the Turkish Armed Forces (TSK) now refrain from entering the Afrin city center and opt for long-term siege warfare? It also has experience in that approach, having conducted an 80-day battle for al-Bab in Operation Euphrates Shield.

Indications from Ankara and the battlefield suggest Turkey is opting for urban warfare.

In a Feb. 3 statement, Turkish President Recep Tayyip Erdogan said, “We are seizing the mountains of Afrin. We are now advancing toward Afrin — not much is left.”

In Turkey, political echelons and news media tend to measure field developments by the number of YPG fighters neutralized and the size of the territory captured. It will be difficult for the Turkish public to subscribe to a perception of a military victory before the symbolically important Afrin city center is captured and the YPG resistance there crumbles.

Field developments also suggest the TSK is preparing for urban warfare. Commando battalions, gendarmerie and police special units are deployed on the Turkish side of the border on full standby. The TSK, with the experience it gained during the long siege of al-Bab, doesn't really have much confidence in FSA forces, whose effectiveness has been poor. Instead, the TSK is talking about leading with some 3,000 army commandos, gendarmerie and police special action forces. In such a plan, the FSA will be tasked to provide rear security to ensure an uninterrupted flow of logistics and reinforcements to the frontlines.

Another significant indicator that Turkey is opting for urban warfare is intensive drone reconnaissance over the city's center. According to Turkish media reports, these drones are producing 3-D models of all the streets and buildings in Afrin to develop targets.

One of the most important lessons the TSK learned at al-Bab was the need for coordinated advances of infantry units with precision fire support. Media reports said the YPG is not allowing civilians to leave the city center, hoping to use them as human shields, just as the Islamic State did at al-Bab. The YPG is said to have defensive strong points in the city center equipped with anti-tank missiles, tunnels, sniper operations and roadside bombs, while also arming the civilians. It remains to be seen whether the YPG will opt for vehicle-bomb suicide attacks that will disrupt its enemy's logistics and affect its morale.

With its uninterrupted reconnaissance over Afrin, the TSK is assessing where the YPG might deploy and set up its traps. Ankara, given the increasing international media references to civilian losses in Afrin, will have to adjust its plans accordingly. One way could be to allow civilians to evacuate to areas controlled by Syrian President Bashar al-Assad’s army. For an easier victory at Afrin, Ankara might even allow the YPG to evacuate unarmed. The question is now whether the YPG will choose to disengage and withdraw or stand firm and fight. Unfortunately, the indicators from the field suggest the YPG is determined to resist.

Another important factor that will affect the TSK’s urban warfare will be its ability to sustain close air support. For this, Ankara has to depend on Moscow to keep the airspace accessible 24/7. But Moscow’s record doesn't inspire confidence. During the al-Bab siege, Moscow refused to open the airspace.

By capturing Afrin, Ankara will achieve a military victory that probably will diminish American persistence in cooperating with the YPG, fortify Turkey’s hand at the negotiating table the Russians are trying to set up and, above all, score a perceptual victory. The basic paradox Ankara will have to deal with is how to minimize civilian losses and material damages to the city. This is especially important given the negative correlation between a military victory and its international ramifications — as Turkey has already lost the propaganda war in the Afrin operation. Thus, minimizing civilian casualties and other damages is the only way to prevent another blow to its international standing.