Both sides forced to up casualty estimates as Afrin battles rage

The official body counts are rising as Turkey's Operation Olive Branch continues in Afrin, with at least 24 civilians dead so far and both sides exaggerating losses inflicted on the other. 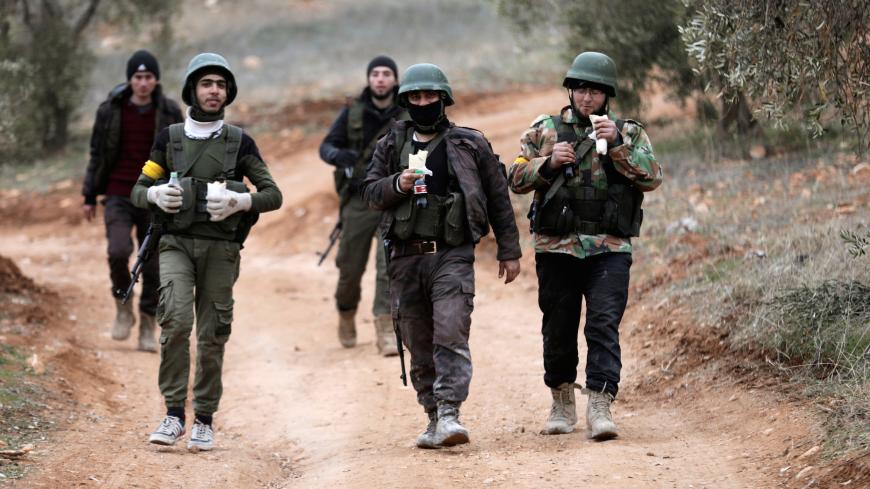 As the Turkish military offensive against Syrian Kurdish forces enters its fourth day, Syrian Arab rebels whose main purpose remains to topple President Bashar al-Assad's regime are at the front lines on Turkey’s side.

The Free Syrian Army (FSA), a loose coalition of mainly Sunni Arab rebel forces, captured a strategic village and two hills in Afrin, the mainly Kurdish region that is the focus of the Turkish campaign, Turkey’s state run Anadolu news agency reported today. Clashes between the Kurdish fighters known as the People’s Protection Units (YPG) and the Turkish-led forces continued to rage near the Qastal Jendo hill on the northern border of Afrin, with the YPG claiming it had swiftly recaptured lost ground.

Turkish airstrikes and shelling have left at least 24 civilians — including six children — dead since the start of the Turkish offensive called “Olive Branch,” the London-based Syrian Observatory for Human Rights (SOHR) said in an update.

Cut off on all sides by Turkey and its allies and regime forces, Afrin is facing a humanitarian crisis. US Secretary of Defense Jim Mattis warned that the Turkish operation “risks exacerbating the humanitarian crisis that most of Syria is going through.” Mattis added, "In the Afrin area we had actually gotten to the point where humanitarian aid was flowing, refugees were flowing back in … the Turkish incursion disrupts that effort.”

Turkey says its primary objective is to "cleanse" its borders of YPG "terrorists" and to create a safe zone separating its borders from Afrin. While Turkey has the upper hand with its air force, the YPG remains a formidable foe, with many of its top leaders hailing from the Kurdistan Workers Party (PKK), which has been fighting Turkey — NATO’s second-largest army — for the past 33 years. The YPG’s links to the PKK underpin Turkey’s hostility toward the group.

Establishing an accurate casualty toll is proving difficult with both sides exaggerating losses inflicted on the other.

Turkey has confirmed at least three Turkish soldiers died so far. The YPG claims at least 10 times as many have been killed. But SOHR figures suggest the FSA are the worst hit.

In an interview with Reuters earlier this week, FSA commander Yasser Abdul Rahim said a 25,000-strong rebel force was taking part in Olive Branch. He said the “leading goal” of the FSA was to capture Tal Rifaat, a town southeast of Afrin, and a string of Arab villages the YPG wrested from rebels in February 2016.

Critics say the FSA, derided by the YPG as “gangs” and “mercenaries” and riven by internal divisions, has yet to prove its real worth on the battleground. Some of its more radical Islamist elements are overtly hostile to the United States and have engaged in atrocities. In July, the US administration decided to pull the plug on a CIA program to funnel weapons and other aid to so-called vetted moderate rebels operating under the FSA umbrella. The United States has since been pouring all of its resources into the YPG-led Syrian Democratic Forces, a coalition of Kurds and Arabs who are the US-led coalition’s top partner against the Islamic State.

The group arguably suffered its biggest blow when Turkey tacitly cooperated with Russia to allow regime forces to retake rebel strongholds in eastern Aleppo in 2016. But Ankara remains the FSA’s sole and biggest supporter, with fighters and their families offered sanctuary inside Turkey and the Euphrates Shield zone captured by Turkey in its eponymous offensive launched with the FSA’s backing — and Russian consent — in 2016.

Charles Lister is a senior fellow and director of the extremism and counterterrorism program at the Middle East Institute and a vocal supporter of the FSA who has termed the United States’ decision to turn its back on them “a big mistake.” Al-Monitor spoke to Lister about the FSA’s performance in Operation Olive Branch. Here are some of the highlights:

Al-Monitor:  FSA forces fighting with Turkey are frequently derided for their lack of unity, effectiveness, etc. Do you believe that Turkey has succeeded in training them into a more effective combat-ready force? Are we seeing signs of this in the Afrin front?

Lister:  Turkey appears to have effectively used the Euphrates Shield zone in northern Aleppo as a training ground for its Syrian opposition partners, while also strongly pushing for groups to operate in closer coordination through the “national army” concept. It’s far from a perfect design and the opposition force operating around Afrin remains divided into a number of separate factions, but nonetheless, they do appear to be more professional, better equipped and more driven than before.

More broadly, we also need to bear in mind the immeasurable value that a single uniting ideology can have on multiplying one’s military capabilities on the ground. Jihadist groups like [IS] and al-Qaeda enjoy this kind of effect, as do groups like the YPG. The Syrian opposition, on the other hand, represents a broad spectrum of social, political and religious ideologies, which naturally results in a more complicated umbrella.

Al-Monitor:  Who are these people and what is their ideology?

Lister:  The majority of the groups involved originate in the most nationalist-focused FSA groups that emerged across the entire stretch of northern Syria, from Idlib in the west to Hasakah in the east. Some of these groups ended up being expelled or exiled, either by jihadists or by the YPG, while others have remained semi-operational by crossing between northwestern Syria and southern Turkey, according to Ankara’s orders. The launching of Euphrates Shield in northern Aleppo finally provided a home base for many of these groups, and since then, their respective potentials have increased somewhat.

There are also some more political Islamist-minded groups involved, most of which are ideologically close to the Muslim Brotherhood (like Faylaq al-Sham, for example), and other groups whose driving motivations are driven by ethnic concerns, most Turkmen.

Al-Monitor:  What impact do you think has America's withdrawal of support from some of these groups had?

Lister:  Big picture, the withdrawal of CIA support to vetted, anti-Assad FSA groups in northern Syria simply drove groups more deeply into Turkey’s hands. After all, Turkey is now seen as the only remaining hope for the anti-Assad cause, despite its hedging position on Assad, Russia and Iran. That saw them lose some of their agency, and it has also made their presence in places like Idlib much more hazardous, as they’re now perceived by jihadist groups like [Hayat Tahrir al-Sham] as foreign proxies, and thus as potential threats.

Al-Monitor:  It seems inevitable that some would simmer at the US' massive support to Kurds. Do you think the resentment could (further) radicalize them? How are these Arabs different from those in the SDF?

Lister:  The key differentiating factor between the Arabs working with Turkey and the Arabs working with the SDF relates to their respective priorities, with the former still primarily driven by an anti-regime agenda (which includes the YPG in Afrin) and the latter seeking instead to carve out a semi-autonomous territorial zone governed by an entirely new — some might say alien — ideology. Religion and the acceptance of its role in politics might have some role to play in differentiating the two, but I wouldn’t say it was the more significant of other more political factors.