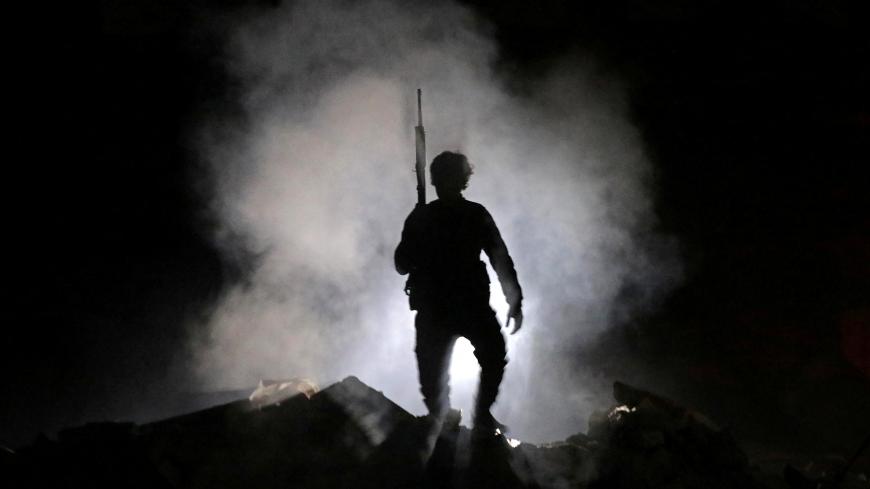 The United States has supported the Kurdish YPG in the battle against the Islamic State (IS) in Syria, but Turkey considers the YPG a terrorist group. Turkey's ruling Justice and Development Party (AKP) hasn't forgotten the images of US soldiers sporting YPG patches, which date back to June 2016.

But pictures of patches aren't that important to the Turkish public, which is more baffled by recent images of the Free Syrian Army (FSA), a group of Turkish military-backed rebels opposed to the regime of Syrian President Bashar al-Assad.

Turkish Armed Forces (TSK) fought alongside the FSA during Operation Euphrates Shield against IS in Syria. The public didn’t pay much attention to the FSA then. Now, however, with Turkey's offensive on Syrian Kurds in Afrin, the FSA's significance is rising. The change began Jan. 19, the day before Turkey launched the Afrin operation, with images broadcast of 20 buses carrying FSA fighters across the border into Syria. Most Turks were surprised to see that so many fighters could be mobilized so promptly.

The public's confusion was reinforced by comments from significant opposition figures — for example, Ozturk Yilmaz, Turkey's former consul general to Mosul, Iraq, who was held captive by IS for 101 days. Yilmaz is now the deputy chairman of the main group that opposes the current AKP government, the Republican People's Party (CHP). Yilmaz said Jan. 25 that one should look at the origin of these groups Turkey supports that oppose the Syrian regime, including the FSA, which was indeed al-Qaeda. This comment touched a raw nerve within the AKP and generated waves of angry outbursts against the CHP, so much so that anyone who dares to criticize the Afrin operation or the FSA could now face legal action.

“While you are sleeping in your warm bed, FSA fighters along with my soldiers are killing the terrorists you support," Erdogan said, referring to Yilmaz and the YPG.

CHP Chairman Kemal Kilicdaroglu also voiced concerns Jan. 29 about the army’s alliance with the FSA. He asked why the brave Turkish soldiers were placed behind the FSA and why their accomplishments were in a sense attributed to the FSA.

That same day, pro-AKP daily Sabah columnist Hilal Kaplan wrote a column with the headline “We will defend the FSA” and declared the FSA to be Syria’s true national forces.

Erdogan echoed Kaplan’s statement a day later, saying, “The FSA, just like the national forces during our Independence War, is a civilian establishment. The FSA fighting along with our brave troops is a fact to be proud of.” Erdogan’s praise of the FSA and the AKP’s obsession with insignia continued when Erdogan said Feb. 3, "Look who the FSA is next to now. They are shoulder to shoulder with the Turkish Armed Forces. And what patch do they [FSA members] have on their arms? It is the Turkish flag. And what does the YPG [wear]? It is the American flag.”

The AKP’s collective efforts to brand the FSA as a multiethnic force fighting next to the Turkish army against the US-backed YPG makes an attractive appetizer for domestic consumption. But it was just in December when Erdogan said, “Hey, US — didn't we establish the FSA together with you?”

A retired Turkish colonel told Al-Monitor, “Yes, both the Pentagon and the CIA had helped train Syrian rebels in Turkey. But the training and arming were limited compared with what they had done for the YPG. Once the United States gave up on the FSA, Turkey struggled to keep them in check and utilized them for Operation Euphrates Shield. But it's always difficult for regular armies to keep militia under control. If Afrin is a long-term engagement, in time the relationship inevitably will generate higher costs [than returns] for the Turkish Armed Forces.” The colonel added that the AKP’s relatively newfound love of the FSA and constant praise of the militia are dangerous because of the FSA’s unpredictability.

Indeed, the news about the FSA perplexes the public. While Erdogan is determined to argue they are Syrian forces defending their own land, the daily Yeni Safak shared a video of an FSA fighter from Rize, a Turkish city on the Black Sea coast. A senior AKP member told Al-Monitor, “There are Turkmen brigades within the FSA, and a handful of Turks have joined them.” Facing strong reactions, Yeni Safak deleted the tweet about the FSA fighter from Rize.

Still, AKP members make potent public statements praising the FSA. For example, outspoken AKP parliamentarian Burhan Kuzu commented, “The FSA is a local and national militia.” So what does the Turkish public make of the FSA after all?

Musa Ozugurlu, a journalist who has lived in Syria during the civil war, told Al-Monitor, “We can look at three distinct groups’ views on the FSA. First are the Islamists, who view the FSA as holy fighters. Since this group mostly views the [Shiites], Syrian Armed Forces and the YPG as nonbelievers, the FSA is engaged in a holy war in their eyes.” Ozugurlu’s analysis here is crucial in highlighting the hypocrisy in the government’s predominant rhetoric of “local and national” forces versus the Islamist quest for jihadi fighters. The FSA here also represents brewing tension within the AKP among ultranationalists and radical Islamists.

Members of the second group Ozugurlu described are the nationalist forces who view the FSA through pragmatic lenses and believe it uses its power against the YPG. A pro-AKP history professor told Al-Monitor, “Both Iran and the United States use foreign militias, or mercenaries — why can't Turkey?”

Ozugurlu places those who are worried about the FSA-TSK alliance in the third group. Kurds, Alevis, and secular and left-leaning groups belong in this category in Turkey. Ozugurlu said, “I witnessed the FSA employing terrorist methods in Syria. The FSA has no ideological view or any sort of backbone, really. It is an army in name only. They lack a proper command and control system because their commanders are rarely on the ground in Syria. They lack local support and are simply mercenaries willing to work for the highest bidder.” The main concern here is what will happen to FSA forces after Turkish involvement in Syria ends.

Omer Gergerlioglu, a human rights activist and T24 columnist, told Al-Monitor, “There is a correlation between sympathy for the FSA and support for the Afrin operation. Those who support the operation also applaud the FSA. The Kurds are relatively divided on this. For supporters of the [pro-Kurdish] Peoples' Democratic Party, the FSA brings back bitter memories of Kobani. On the other hand, Huda-Par [the Kurdish Islamist Free Cause Party in Turkey] believes the FSA is battling the Americans, so it isn't critical of an alliance with the FSA.” Gergerlioglu also highlighted a crucial rift between radical Turkish and Kurdish Islamists in Turkey. “The Islamist Felicity Party members are divided. Kurdish members fear that prolonged involvement in Afrin will generate conflict between the Kurds and Turkey inside Turkey.”

Turkey’s engagement with the FSA could deliver certain benefits for national security, yet these benefits are difficult to assess without proper oversight of funding, training and arming of these militias, and accurate accountability of their actions in the war zones. For now, Erdogan and his cronies are taking the easy route of praising the FSA and continuing in their harsh anti-American rhetoric, focusing on patches attached to uniforms.