In the chaos of Turkey's offensive in Afrin, Syria, both the Turks and Syrian Kurdish militants continue to claim the upper hand and dismiss each other's casualty reports as propaganda. 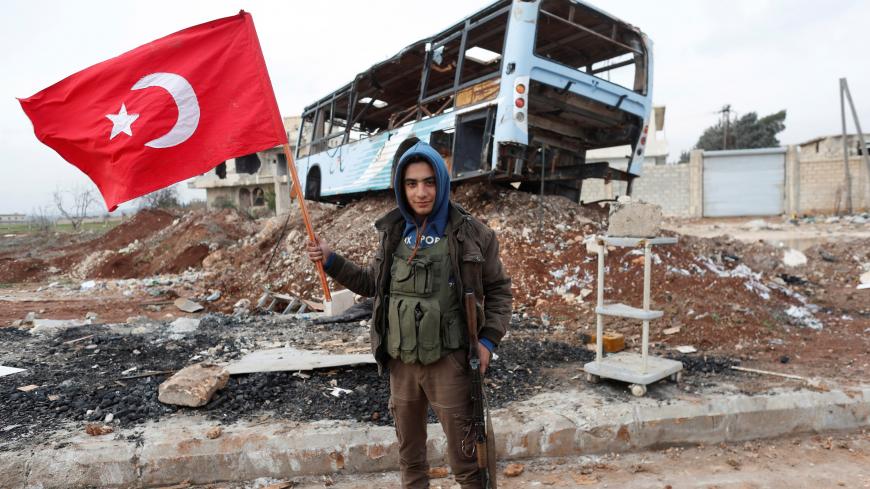 Turkish forces have kept up their offensive against Kurdish militants in the northern Syrian Afrin region for a third day as both sides continued to claim victory against the other.

The Anadolu news agency reported that Turkish-led forces had captured the strategic Bursaya Mountain today. The pro-government newspaper Yeni Safak showed footage of what it claimed were Turkish forces and their Free Syrian Army (FSA) allies atop the mountain hauling off militants allied with the Syrian Kurdish People’s Protection Units (YPG) amid loud chants of “Allahu akbar," or "God is great." A journalist recording the moment joined in the celebrations.

Hours later, CNNTurk reported that the FSA had withdrawn from Bursaya amid YPG claims that they had won back control of the hilltop in a fourth and final assault. Anadolu acknowledged in a subsequent report that the FSA had pulled back.

Anadolu also reported that Turkish troops had captured the Afrin villages of Shankal, Qorne, Balia and Adah Manli, along with some other rural areas. But the London-based Syrian Observatory for Human Rights, which is seen as a fairly impartial monitor of the nearly seven-year-long Syrian conflict, said the YPG had won back two of the villages and that violent clashes continued between Turkish-led forces and the YPG.

The monitoring group reported the Turkish airstrikes and artillery attacks have resulted in the deaths of at least six civilians — one of them a child — who were killed when Turkish warplanes allegedly struck a poultry farm in Jelbara village to the southeast of Afrin city. The claims of civilian deaths were echoed by the YPG. The pro-Kurdish Firat news agency reported on the joint funeral of two YPG fighters and 14 civilians who were allegedly killed in the Turkish offensive. Crowds gathered at the funeral, which was held inside Afrin, reportedly chanted “revenge” and “long live the Afrin resistance.”

Turkish government spokesman Bekir Bozdag dismissed reports of civilian casualties as “dark propaganda,” saying, “We are doing our utmost to ensure that civilians are not harmed.” Bozdag insisted that Olive Branch was legally justified and that no Turkish soldiers had died in the operation, which is in its third day.

“The presence of terror groups in the Afrin region threatens Turkey and Syria and Syria’s territorial integrity,” Bozdag said. He threw in the rarely mentioned fact that some 370,000 Syrian Kurds are sheltering in Turkey.

Several hours later, Anadolu reported the first Turkish casualty, saying a soldier had been killed in clashes with the YPG in the south of the border province of Kilis.

The pro-YPG Hawar news agency, meanwhile, reported that Turkish forces had begun shelling areas lying further east between the towns of Darbasiyah and Amude, which lie to the east of the Euphrates River in Syrian Kurdish-controlled territories where US special forces are deployed.

The YPG has struck back with rocket fire on Turkish border areas. Two people died and 12 others were injured when a rocket hit a camp housing Syrian rebel fighters across the border from Turkey’s Hatay province, according to local reports that could not be independently verified.

Turkey claims its offensive, called “Olive Branch,” aims to create a safe zone 30 kilometers (19 miles) wide to protect its borders from YPG “terrorists,” saying they are no different from the Kurdistan Workers Party (PKK), the Kurdish rebel group that has been fighting Turkish forces since 1984, initially for Kurdish independence and now for self-rule inside Turkey.

The PKK campaign was run out of Syria with the regime’s blessings — that was, until Turkey threatened to go to war, prompting the Syrian government to boot out PKK leader Abdullah Ocalan in October 1998. He was captured with the CIA’s help in February 1999 and remains in a Turkish island prison off the coast of Istanbul.

With the exception of the pro-Kurdish bloc, Turkey’s main political groups are backing the Turkish intervention amid a tidal wave of nationalist euphoria that is gripping the public. In Hatay, Antakya rolled out its amateur Ottoman military band to perform conquest-themed tunes in a morale booster for Turkish soldiers taking part in Olive Branch.

The Istanbul-based Armenian Orthodox Patriarchate weighed in with a statement declaring, "[We] wish the Olive Branch offensive success and pray for terror actions to end and for peace, wisdom and serenity on which all mankind depends to be assured, especially in our region."

The international community continued to air its worries about the impact on civilians caught in the conflict. US Secretary of State Rex Tillerson, who is in London, repeated calls for “restraint” today. The State Department stated on Sunday that the Turkish campaign should be “limited in scope.”

France has called for a UN Security Council meeting today to discuss developments in Syria, including the Turkish incursion. None of this satisfies the YPG, which is the US-led coalition’s top ally against the Islamic State (IS) in Syria.

Turkish President Recep Tayyip Erdogan responded with stock defiance, telling an audience in Ankara, “I ask the United States: Did you have any specific time duration in Afghanistan?” and declaring Turkey would not stand down until “the work is finished.” He added, “We have no desire to stay there — we know how to withdraw. We also have no intention of getting permission from anyone for this.” Erdogan, acknowledged, however, that after the Turks “discussed this with our Russian friends, we have an agreement with them, and we all discussed it with other coalition forces and the United States.”

The widely accepted view is that Turkey intervened in Afrin, which lies within Russia’s zone of influence, with Moscow’s blessings and expectations of American inertia that despite US calls for restraint have been vindicated so far. US Secretary of Defense Jim Mattis sounded accommodating of the Turkish operation. Speaking to journalists en route to Asia he said, “We are working now on the way ahead. We’ll work this out,” and noted, “Turkey has legitimate security concerns.”

Washington’s limp reaction has set off alarm bells among Syrian Kurdish officials. Some fear that the administration may well look the other way if and when Turkey decides to deliver on its threats to attack Manbij, in the hope that it will help calm Turkish ire over Washington’s recent announcement that it plans to retain a military presence in Syria for the foreseeable future.

A senior commander with the YPG-led Syrian Democratic Forces told Al-Monitor, “Mattis’ remarks only serve to encourage Turkey in its attacks. What we expect from the United States is to tell Turkey to stop the attacks immediately.”

Erdogan’s pledges to withdraw from Afrin suggest that Syrian Kurdish officials may be justified in their suspicions that the Turkish-Rusian deal involves allowing regime forces to win back control of Afrin.

The offensive is in many respects a replay of August 2016, when Turkey’s Operation Euphrates Shield moved into Jarablus and eventually al-Bab, also with Russian blessings. Turkish forces and their allies drove out IS fighters, wresting some 2,000 square kilometers (1,200 square miles) of territory from them, and the US-led coalition backed the Turks with airstrikes. But the overarching goal of that operation was to drive a bigger wedge between YPG-controlled areas from Manbij to the east of the Euphrates River and the Afrin enclave to the west.

Meanwhile, Erdogan's threats to punish anyone who dares to oppose the campaign were put into action today, as 30 people including prominent Kurdish journalists Nurcan Baysal and Ishak Karakas were detained for criticizing the Afrin offensive on Twitter. Baysal’s lawyer Reyhan Baydemir said police had broken into her home in Diyarbakir in a midnight raid and that she remained in custody with the police’s counterterrorism unit.

As of publication time, there were unconfirmed reports that journalist Sibel Hurtas, who contributes to Al-Monitor, had also been detained.

In Turkish-controlled Northern Cyprus, nationalist vigilantes attacked the offices of the opposition Afrika newspaper. The ransacking, accompanied by calls of “Allahu akbar,” was triggered by a headline calling the Turkish incursion an “occupation.” In an apparent reference to Afrika’s editorial stance, Erdogan had predicted earlier, “The Turkish Cypriots will respond appropriately.”

Afrika’s managing editor, Sener Levent, insisted that Erdogan’s comments had encouraged the attack and that police had failed to intervene to protect his staff. He told the independent Etkin news agency, “They all but burned down" the offices and "We are physically unsafe.” Levent, who is a fierce critic of the Turkish military presence on the island, kept up his salvos against “the dictator Erdogan” and vowed to continue to speak his mind.