As Turkey fights to reclaim the strategic hilltop of Bursaya a second time, it's getting harder for the president to use the Olive Branch offensive to drum up support. 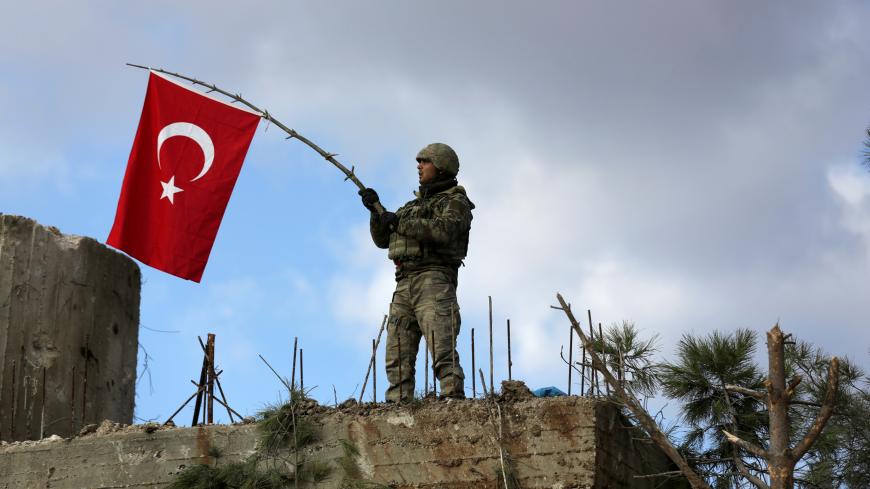 Maintaining control of a strategic hilltop is a priority for Turkey as its “Olive Branch” offensive drags on against Syrian Kurdish forces in Syria’s Afrin region.

On Jan. 22, Turkish forces claimed victory over Bursaya amid cries of "Allahu akbar," only to lose it within hours to the Syrian Kurdish People’s Protection Units (YPG).

Yesterday, Turkish forces and their allies from the Free Syrian Army planted the Turkish flag on top of the hill, declaring they had seized full control of Bursaya once again.

But authorities were forced to put the kibosh on a government-sponsored media tour of the hill today amid news that the YPG had beaten back the Turkish-led force around a village at the foot of the hill. The hill, which serves as a buffer between the Turkish-controlled Euphrates Shield zone and Afrin, is a strategic prize. Overlooking Azaz, a logistical hub for Turkish military operations in Syria, Bursaya is a bridgehead to the rest of Afrin, which is why Turkey was hell bent on seizing it, YPG sources told Al-Monitor.

Turkish-led forces capturing territory by day only to lose it to the Kurds by night is becoming something of a pattern, and testing Turkish President Recep Tayyip Erdogan’s bullish pledges to drive the YPG out of the more than half of Turkey’s 900-kilometer (560-mile) border with Syria that remains under Syrian Kurdish control.

Turkey’s image is already in tatters because of Erdogan’s brutal crackdown on dissidents, including scores of Kurdish leaders, and it's fast losing the propaganda war over Afrin. Much of the global media coverage is highlighting the growing number of civilian casualties, including women and children, killed in wave upon wave of Turkish airstrikes. Social media is awash with images of charred babies who allegedly perished in Turkish attacks.

The monitoring group Airwars reports, “From the start of operations on January 20th to January 28th, at least 41 to 55 civilian deaths have been assessed by Airwars as likely caused by Turkish-backed forces, along with an estimated 10 to 15 civilian fatalities tied to Kurdish counterfire.”

Turkish bombs have also reportedly damaged an ancient temple built by the Arameans in the first millennium B.C. that is part of Afrin’s rich archaeological heritage.

Turkey insists that the YPG in Afrin poses an existential threat to Turkey’s security, chiefly because of its deep ties to the Kurdistan Workers Party (PKK), which is fighting for self-rule inside Turkey. Ankara has failed to produce convincing evidence, however, that the Syrian Kurdish force, which is the US-led coalition’s top ally against the Islamic State, has carried out any hostile action against Turkey from the Kurdish-majority enclave that is also known as Kurd Dagh, or Kurdish Mountain. Yet, blasted with the jingoistic propaganda spouted daily by the pro-government media, public opinion appears to be firmly behind Olive Branch. The few who dare to criticize the offensive are labeled traitors — or worse, jailed. Erdogan has made the likely cost of dissent crystal clear, calling the Turkish Medical Association "a gang of slaves" and "servants of imperialism" for voicing their objections. At least 300 people have been detained for social media posts opposing Operation Olive Branch, deemed by authorities "terrorist propaganda."

In a chilling sign of how the conflict is being accepted if not embraced, urban professionals who usually swap jokes and travel tips have begun circulating images of mutilated YPG corpses. One of the videos shared with Al-Monitor showed close-ups of dead Kurdish fighters — both male and female — grotesquely sprawled across a stretch of gravel. The face of one had been blown off. “This is what the normalization of evil of is, when yuppies trade images of death as casually as they would cartoons,” lamented a Turkish journalist in the chat group.

Jenny White, a widely acclaimed author and anthropologist at Stockholm University’s Institute of Turkish Studies, believes that the Afrin offensive may be linked to Erdogan’s battle to retain and strengthen his grip, after narrowly — some would say fraudulently — winning a referendum last year on vastly expanding his presidential powers. She told Al-Monitor, “A war reminds citizens that their nation is under threat and needs a strong leader.” Pointing to the PKK’s bloody 33-year insurgency and its ties to the YPG, White noted, “In Turkey, that threat is entirely credible. Besides, the Turkish incursion in Afrin has the added propaganda benefit of pitching Turkey as David standing up to the CIA-riddled Goliath that has been supporting the YPG.”

Lisel Hintz, an academic specializing in Turkey and the Middle East at Johns Hopkins University’s School of Advanced International Studies, concurred. She told Al-Monitor, “Every seemingly anti-Western swipe in Turkey’s current foreign policy can best be understood in terms of the need for Erdogan and his Justice and Development Party to stay in power.” Hintz reckons that Erdogan calculates this will likely be best achieved by calling for early presidential and parliamentary elections ahead of their scheduled November 2019 date so as to “capitalize on the doctored and heavily subsidized economic growth and rally-around-the flag sentiment.” Early elections would also help nip potential challenges from former President Abdullah Gul and the nationalist Meral Aksener.

Yet, if Turkish forces get well and truly bogged down in Afrin, Erdogan may find it increasingly hard to keep spinning it all as victory.

Correction: Jan. 30, 2018. A prior version of this article implied that Turkish forces had lost control of the hill, in fact clashes continue.

by Murielle KASPRZAK and Joseph SCHMID | AFP | May 26, 2022
END_OF_DOCUMENT_TOKEN_TO_BE_REPLACED