Turkish jets attacked the northern Syrian town of Jindires with the ultimate goal of encircling the city of Afrin. 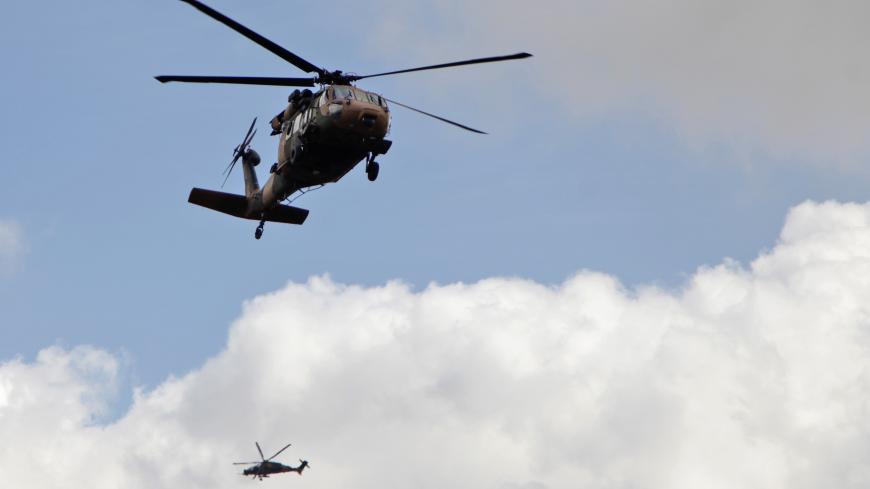 A Turkish army Black Hawk helicopter (front) and a T129 ATAK attack helicopter fly toward the village of al-Maabatli in the Afrin region in the northwestern Aleppo province countryside as part of the ongoing offensive, March 2, 2018. - GETTY/Bakr Alkasem

Turkish air force jets pounded targets around the town of Jindires as a military offensive against Syrian Kurdish forces in northern Syria entered its 45th day. Efforts to drive out the group known as the People’s Protection Units (YPG) from Jindires are seen as critical to Turkey’s goal of encircling Afrin amid growing debate as to whether Turkey’s hawkish President Recep Tayyip Erdogan will follow through with pledges to capture the city of Afrin itself — a fight that promises to be drawn out and bloody.

A commander from the YPG-led Syrian Democratic Forces (SDF) contacted by Al-Monitor via WhatsApp concurred that the fall of Jindires, which lies southwest of the city of Afrin, would disrupt access to and from Syrian regime-held areas that serve as the Kurds’ logistical supply lines for the defense of Afrin and its environs.

“The Turkish strategy is to lay siege to Afrin and to cut off the connection to Nubl and Zahra,” the SDF commander, speaking on condition of anonymity, told Al-Monitor.

Forces loyal to the Syrian regime have reportedly been deployed in support of the YPG from the mainly Shiite villages of Nubl and Zahra. Haberturk, a mainstream news channel, broadcast footage shot from Hatay, on the Turkish side of the border, of Turkish jets bombing Jindires. Large plumes of brown smoke rose from a hilltop that the channel said was near Jindires. Haberturk reported that the purpose of the strikes was to "soften" resistance before Turkish-led ground forces moved into the town itself.

Commentators believe that the battle for Jindires marks a shift from rural to urban warfare in Turkey’s Operation Olive Branch — a move that will prove hugely challenging. Jindires needs to be taken if Turkish-led forces are to close in on Afrin proper. Sedat Ergin, a veteran columnist for Hurriyet, wrote that Jindires "spreads out over a large area … [and] clashes with terrorist groups in a residential area with civilians carry more risks and difficulties than ones in the countryside.”

According to Istanbul-based think tank the Center for Economics and Foreign Policy Studies (EDAM), the Turkish “gendarmerie and police special operations units, which are the urban warfare and counterterrorism elite of the Turkish security forces, are being deployed to the areas of operation." EDAM added that the "use of … civilians as human shield[s]" on behalf of the YPG and the Kurdistan Workers Party (PKK) is "highly problematic."

The PKK has been waging a battle for Kurdish self-rule inside Turkey and is closely allied with the YPG. Turkey says the PKK and the YPG are one and the same and pose an existential threat. It is on these grounds that Turkey has carried its battle to Syria, where the YPG — thanks to US backing for a campaign against the Islamic State (IS) — now controls around a quarter of the country.

The US-led coalition’s alliance with the YPG has wrecked Washington’s relations with Turkey. But as the campaign against IS winds down, the Donald Trump administration is scrambling to salvage its strategic partnership with Turkey, which has been a NATO ally for more than half a century. In a background briefing for Turkish journalists last week, a senior US official in Ankara declared, “We do not consider the YPG as an ally to the US. Our ally is Turkey. The United States made clear from the beginning our military cooperation with the YPG … was a temporary, tactical arrangement aimed entirely at combating [IS].” Moreover, Washington argues that what is going on in Afrin is none of its concern because Afrin is within Russia’s zone of influence and no American troops are stationed there.

During his recent meeting with Erdogan in Ankara, Secretary of State Rex Tillerson appeared to have fended off potential moves by Turkey against the mainly Arab town of Manbij, which is administered and protected by locals who are backed by the YPG. Some US special forces are deployed close to Manbij, which they helped wrest after a protracted battle in 2016. But now the YPG is thinking of opening a second front against Turkish-led forces in the Euphrates Shield area from Manbij to alleviate pressure on Afrin, the SDF commander said. That would put the kibosh on Washington's efforts to de-escalate tensions with Ankara over Manbij.

Hardened by more than four years of urban warfare against IS fighters in Kobani and Manbij, the YPG will likely put up stiff resistance against Turkish-led forces, and the number of Turkish casualties — currently at 44, according to the Turkish General Staff — could sharply increase. But should Turkey decide to bomb Jindires proper before sending in ground troops, that risk would be minimized. The SDF commander predicted, “They don’t care about civilians. They will bomb the town, they will flatten it.”

The pro-Kurdish ANHA news site published footage on March 5 of what it said were buildings in the center of Jindires that were struck by Turkish planes. The images showed streets strewn with rubble and collapsed cinder block structures on fire. Photographs of civilians said to be killed and wounded in the Turkish attacks continue to be circulated by pro-Kurdish social media accounts.

Western journalists coming into the Kurdish-controlled northeast via Iraqi Kurdistan have been denied access to Afrin. Media coverage both in Turkey and by Kurdish outlets remains predictably slanted, and the number of civilian and combatant casualties are near impossible to establish. But Human Rights Watch (HRW) reported last month that “Turkish Armed Forces appear to have failed to take necessary precautions to avoid civilian casualties in three attacks in northwest Syria in late January 2018.” The group further noted, “The attacks killed 26 civilians, including 17 children.” HRW based its report on investigations carried out on just three Turkish attacks. Syrian Kurdish officials cite civilian deaths in the hundreds. Turkey denies targeting civilians or any civilian infrastructure and accuses the YPG of killing Turkish civilians in cross-border artillery attacks. EDAM reported that seven Turkish civilians had perished in such attacks since Jan. 21.

Various Trump administration officials who follow the Syrian conflict dismiss Turkey’s threats to capture Afrin as hot air and insist that its foothold in the areas around Afrin is unsustainable. But Aaron Stein, a senior fellow at the Atlantic Council who has written extensively about Turkey’s role in Syria, is less sanguine. “I take Erdogan at his word," he told Al-Monitor. "I assume Turkey will surround the city, besiege it and then use overwhelming firepower to enter Afrin, unless the YPG and the Syrian regime reach an agreement that will force Russia to take action to clamp down on the actions of its junior partners in Ankara.” Stein was alluding to Russia’s consent in letting Turkey use airspace that it controls in northern Syria to carry out Operation Olive Branch. The prevailing consensus is that Russia gave Turkey the nod so as to force the YPG to ditch its relations with the United States and to allow regime forces to regain full control over Afrin.

A recent opinion poll published by Metropoll and made available to Al-Monitor suggested that 56% of respondents strongly support Operation Olive Branch, while 15% partially support the campaign. But if the Turkish army were to move into Afrin city, a seasoned commentator who declined to be identified by name, argued "the nation will focus on its triumph over the PKK and not on the number of Turkish soldiers who died achieving it."