As Turkish troops head for Afrin, will Turkey commit to the next-level battle it will face there if the People's Protection Units stay and fight? 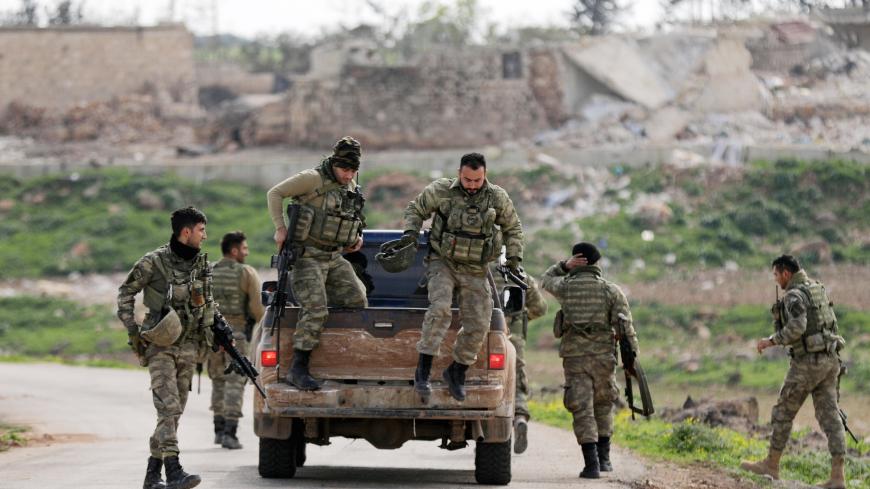 As Turkish troops and their Free Syrian Army rebel allies close in on the the mainly Kurdish city of Afrin, the looming question is whether Turkey will actually wade into what analysts warn will be a bloody fight with high civilian casualties. The other is whether the Syrian Kurdish militant group known as the People’s Protection Units (YPG) will remain to defend the city or cut its losses and leave.

These questions arose last week as Turkish troops moved on the town of Jinderes, which lies southwest of Afrin and is critical to disrupting the YPG’s supply lines further east. The Turkish-led force backed by massive air power seized Jindires with little resistance. The ease suggests the YPG decided to tactically retreat and save its manpower for Afrin city.

Turkey’s hawkish President Recep Tayyip Erdogan left no room for doubt about Turkey’s intentions, saying Friday, “Now the center of Afrin is surrounded and our entry is imminent.” Erdogan announced ambitious plans for the city, saying Turkey would help rebuild its infrastructure, restore electricity and water and modernize its education and its healthcare system “just like it did in Jarabulus, al-Rai, Azaz and Al-Bab.”

The Turkish strongman was referring to the hefty chunk of territory Turkey seized during the Euphrates Shield operation that began in in August 2016. Turkey has since set about building roads, schools and hospitals and training local security forces there with what critics call “neo-Ottoman" — some even say Islamist — zeal.

The YPG has vowed to defend Afrin, redeploying hundreds of fighters from its stronghold in northeastern Syria to join the fight. A commander for the YPG-led Syrian Democratic Forces, which is the US-led coalition’s top ally in the campaign against the Islamic State, told Al-Monitor via WhatsApp, “Turkish forces are two kilometers from Afrin. They are carrying out air and artillery attacks to force the civilian population to flee.” The SDF commander, who spoke on condition of anonymity, ruled out pulling out of Afrin city, where the militants had “made all necessary preparations to confront the enemy.” He added the YPG controlled a strategic chain of hills separating Jindires from Afrin, known as the Hawar mountains in Kurdish. Unlike the string of hills to the east of Afrin that fell to the Turkish-led force in February, this area is “much bigger, thickly forested and harder to penetrate.”

But Turkey’s Operation Olive Branch, launched on Jan. 20, has dented the aura of invincibility that the YPG built with its prowess against the Islamic State. And a growing number of analysts question how long the YPG can fend off Turkey. Ankara has the strategic advantage of air power and rear bases from east, north and the west.

While the valor and discipline of the YPG against IS remain uncontested, coalition air power, guidance and weaponry swung the battle in their favor. In Afrin, which falls outside the United States’ informal zone of influence, the YPG has to fend for itself. And for as long as Russia, which controls the skies over Afrin, lets the Turkish air force carry out strikes, the YPG will remain on the defensive.

The Kurdistan Workers Party (PKK), the Kurdish militia that is fighting for self-rule inside Turkey and working with the YPG inside Syria — Turkey insists they are the same — already had a taste of the Turkish army’s heavy-handedness during protracted battles that erupted in the mainly Kurdish cities and towns in Turkey’s southeast in 2015. Entire neighborhoods were reduced to rubble and over half a million civilians were displaced. According to a UN report, hundreds were killed, tortured and abused as Turkish forces backed by tanks stomped out the PKK’s reckless stab at urban autonomy. YPG sources insist there little reason to doubt Turkish forces will display similarly ruthless tactics in Afrin. But if they believe it will trigger an international outcry that will force Turkey to halt its operations, they may well be proven wrong.

According to the monitoring group AirWars, at least 2,000 civilians died in the battle to wrest the IS’ “capital” Raqqa. What is certain, wrote Samuel Oakford, who conducted the study, “is that the intense bombardment resulted in significant civilian casualties” and “at least 95% of airstrikes and artillery strikes were American.” Yet the world has not reacted.

Though in the case of Afrin, international sympathy lies largely with the Kurds, national governments including the United States have yet to demand Turkey’s offensive stop.

Nicholas Heras is a Middle East Security Fellow at the Center for a New American Security. He told Al-Monitor, “The YPG in Afrin has fought a valiant battle, but Turkey’s strategy of working from the edges of Afrin to toward the center, onto Afrin city, has been successful. There has been no point during [the operation] that the YPG has been able to demonstrate that it can stand up against the Turkish military and its Syrian rebel proxies.” Heras argued, “With the battle for the city of Afrin looming, the YPG would be better served to withdraw what forces it can from Afrin and reposition them in a place like Manbij or on the eastern bank of the Euphrates River. The fact of the matter is no great power — neither Russia nor the United States — is going to intervene to turn the battle for Afrin into a victory for the YPG, like it won in Kobani.”

But withdrawing to Manbij may not offer a respite: Erdogan renewed vows to expand Turkey’s offensive against the YPG further east to Manbij and all the way to the Iraqi border even as US and Turkish officials met in Washington to reach a compromise on the mainly Arab city. The talks are part of a broader US effort to repair ties with Turkey. Ankara insists that Manbij, which is protected by the US-led coalitions, needs to be purged of all YPG influence, that all YPG fighters and administrators be withdrawn from Manbij to the east of the Euphrates River.

The talks ended on Friday with Turkey’s Foreign Minister Mevlut Cavusoglu declaring that the United States and Turkey had reached “a common understanding.” He is expected to travel to Washington in the coming days where he will likely pick up the negotiations on Manbij with Secretary of State Rex Tillerson in a bilateral meeting.

Sources familiar with the substance of the discussions said the outlines of a putative deal foresee ties being established between the Manbij Military Council and pro-Turkish rebels or Trained Syrian Opposition, with some TSO coming in and the “core YPG” moving to the east of the river, but that it would take “a very long time.” Moreover, one of the sources noted, “Everything needs to be mutually agreed between the United States and Turkey, which means nothing will ever be agreed.”

The SDF commander insisted the United States "believes if Turkey takes Afrin and a deal is done on Manbij, Erdogan will be appeased and all of their problems will disappear. They are wrong."

One of the hitches is that US special operations forces remain distrustful of the Arab rebels. They include jihadi elements who have displayed hostile behavior toward them in the past and continue to shoot at them from the Euphrates Shield zone. What's more, the Turks appear to have little control over them. Thus, US Central Command, which oversees coalition operations in Syria and Iraq — and was, rather unusually, not represented at the talks — is likely to push back.

Correction: March 15, 2018. An earlier version of this article incorrectly reported that Turkey's foreign minister would be attending a meeting of the global anti-IS coalition in Washington. His visit was solely to meet with Secretary of State Rex Tillerson, but the trip has since been cancelled.