Now that Russia has reportedly handed over the area around Tell Rifaat to Turkey, all eyes are on Turkey’s performance in the expanded area controlled by its allied Free Syrian Army forces west of the Euphrates. 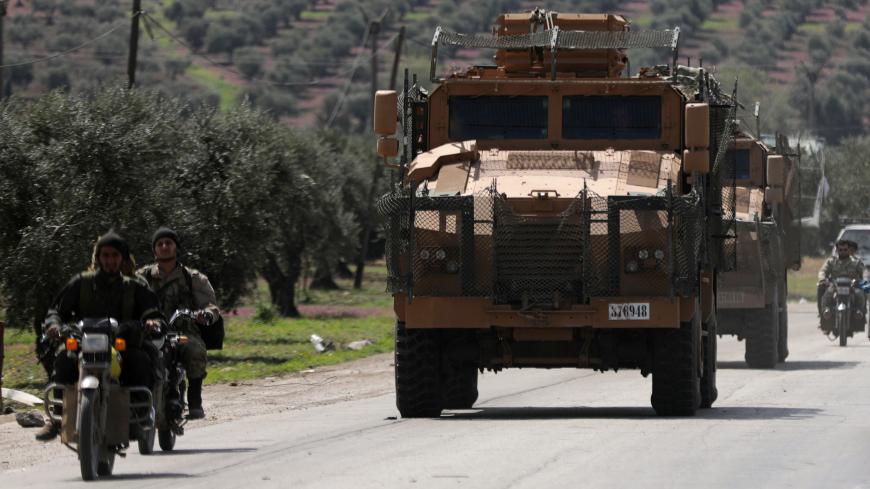 While speculation was rife this week about whether Turkey's next move in Syria would be toward Tell Rifaat or Manbij, Russia unexpectedly withdrew its troops March 27 from Tell Rifaat.

The Turkish-backed Free Syrian Army (FSA) now controls the area around Tell Rifaat, while according to unconfirmed reports, the forces of Syrian President Bashar al-Assad control the city proper. The area is important for Ankara because the Menagh military air base in the city is a critical logistics point to reach northern Aleppo and Idlib. Thus, control provides the FSA with the strategic and psychological upper hand in the region.

“We will take Tell Rifaat under our control and thus achieve the goal of the operation. We ask our interlocutors to fulfill their commitments about Manbij,” President Recep Tayyip Erdogan said March 26. “The US must take over control of Manbij from the terror groups as soon as possible. If that terror organization is not removed from Manbij, then we will have to do it ourselves together with the people of the area.”

Turkey's offensive is an open-ended, effect-based operation aiming to influence the strategic preferences of Washington and Moscow. So Ankara’s calls on Russia to withdraw its forces from Tell Rifaat are also signaling the United States that Turkey may expand the operation to Manbij.

On March 23, Turkish Chief of General Staff Hulusi Akar described Turkish-Russian ties in Syria as “a sincere give-and-take relationship based on confidence." Turkey's cooperation with Russia has been “excellent” despite occasional hiccups on the ground and in the air, Akar added. In this relationship, Turkey and Russia hold common interests west of the Euphrates including Idlib, eastern Ghouta and Afrin.

Defense sources in Ankara say Turkey's offensive in Syria will continue east of the Euphrates no matter what happens. The fall of Afrin in the surprisingly short time of four days and the Turkish army's taking control of Tell Rifaat without any clashes have boosted Turkey’s determination. Defense sources speaking to Al-Monitor on condition of anonymity say four important factors contribute to this decisiveness:

It's also obvious that Turkey's increasing military activities are very much linked with the Iran-Russia-Turkey summit set for the beginning of April in Istanbul. To sit more comfortably at the table and to minimize Iran’s consolidation of power south of Aleppo, Ankara needs a clear-cut success in the field. Moscow appears to expect Turkey to sit at the table with a strong hand to tame Tehran. It's believed Russia is trying to craft a power balance between Ankara-supported Sunni opposition, Assad’s forces and pro-Iranian militias west of the Euphrates.

As clashes ease in northern Syria, three non-state models are emerging there: Turkey-supported Sunni opponents of the regime, US-allied Syrian Kurds and Iranian-sponsored Shiite supporters of Assad. In the coming months, the struggle for political control among the three will be clearer, and their political relationships with Damascus and how that will be treated in the new constitution will be critical.

As for Turkey’s offensive against Kurdish fighters in Afrin, as of March 27 the Turkish military said 51 of its soldiers had been killed and 3,755 Kurdish militants killed, captured or wounded. The area the clashes took place, some 2,000 square kilometers (770 square miles), is now under the Turkish army's control.