Turkey rolls into Afrin, apparently on way to Manbij

The city of Afrin, Syria, unexpectedly fell after Kurdish fighters surprisingly retreated, leaving the world watching for Ankara's next move. 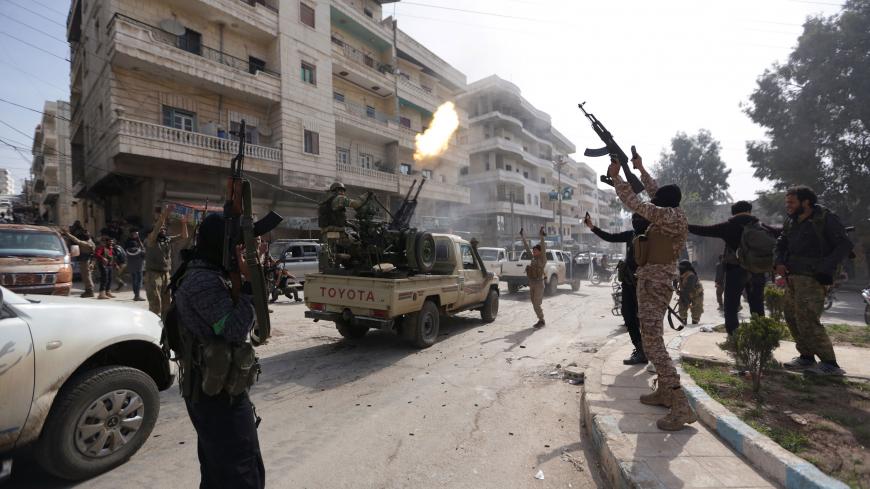 Turkey-backed forces took control March 18 of Afrin, Syria, leaving observers to wonder why Kurdish forces appeared to just hand over the city, giving up their 56-day-long resistance. Yet even as Turkish President Recep Tayyip Erdogan cheered his victory, Kurdish leaders pledged to retake the city, saying in a statement, "Resistance … will continue until every inch of Afrin is liberated."

Of course, Turkey was pleased to take over the city without heavy clashes, numerous civilian casualties and serious damage to the city’s infrastructure. Yet the question persists: Why did Kurdish forces withdraw after all their efforts to protect the area for almost two months? A few important factors played a role.

Turkey's army and allied FSA forces had armored elements as well as air support provided by Turkish F-16 fighter jets, T129 assault helicopters and drones. Turkey's army facilitated the movement of FSA forces by intensifying the pressure from the air. “The YPG didn’t want to face pressure, [so it] abandoned Afrin,” a military source speaking on condition of anonymity told Al-Monitor.

An additional important factor was the YPG’s inability to send adequate reinforcements to Afrin, especially game-changing anti-tank guided missiles. Though the YPG had access to these missiles in its fight against the Islamic State (IS), Washington and Moscow apparently didn't provide the weapons for the YPG's battle against Turkish and FSA forces.

According to another source who also spoke on condition of anonymity, the YPG command east of the Euphrates River instructed the forces to hand over Afrin. At first, some YPG units did not heed the call and kept up the resistance, but the source said they had to give up after three days.

YPG forces in Afrin had two choices: Remain there until the end despite the risk of total destruction and high civilian casualties, or evacuate the city to allow for diplomatic negotiations to hand over control of the city to Syrian President Bashar al-Assad’s forces. The YPG knew that launching an urban war — one it was bound to lose — could erode whatever support it still had from the locals in Afrin.

No doubt, the Turkish intelligence service’s intensified efforts also played an important role in the Kurdish militants' decision to leave and live to fight another day.

Whatever the cause may have been, the YPG's withdrawal from the city of Afrin will seriously affect the image of its military prowess and the political respect it had garnered in the fight against IS.

The YPG withdrew its forces from Afrin via a military air base near Tel Rifaat under Assad's control. This indicates that the regime and Russian forces had advance knowledge of the YPG’s decision to withdraw. Yet it's not yet clear what price Russia and the Syrian regime might have charged for allowing Kurdish forces to use the air base.

"In all of Afrin's sectors, our forces will become an ongoing nightmare" for Turkey and its allies, the statement said, vowing "a switch from direct confrontation to hit-and-run attacks."

It's not clear if the Turkey-led FSA forces will be able to hold the area or how long Turkey might need to stay in the region to fortify the ranks of the Syrian opposition group.

Finally, one more important lingering question is: Did the YPG receive any promise from the likes of Washington, Damascus or Moscow when it decided to abandon Afrin? Further developments in Manbij, Idlib, Raqqa, Deir ez-Zor and east of the Euphrates should be closely followed to answer this question.

What's next in Afrin Similar to the Jarablus experience, a city council is being set up in Afrin. A preliminary meeting of this council was held in Turkey’s southeastern border province of Gaziantep on the day Afrin fell. Participants elected 30 council members to oversee the city's administration. Next, local police and military forces will be established. In this process, officials will gather intelligence to determine whether any militants are posing as locals.

Officials plan to initially resettle some 60,000 people in the city. The ultimate goal is to repatriate some 500,000 Syrians who currently live in camps in Turkey.

Meanwhile, Erdogan is determined to push on to Manbij and other Kurdish areas. Washington, which strongly criticizes the offensive as interfering with the fight against IS, is highly likely to intensify negotiations with Turkey about Manbij's status.