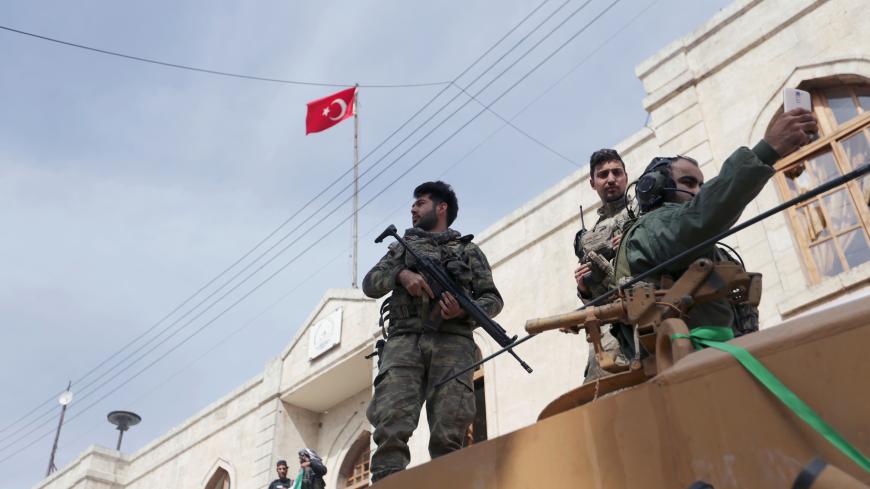 The fall of Afrin to Turkish forces March 18 came as a surprise to most parties involved in the Syrian crisis. Experts, observers and even international anti-Islamic State coalition officials thought that the Syrian Kurdish fighters would have put up a stronger resistance to protect the land and that Turkey’s victory would come at a great cost.

Following the decision by the Syrian Kurdish People’s Protection Units (YPG) to hand over the city center without engaging in urban warfare against the Turkey-led Free Syrian Army (FSA) forces, most now believe that Turkey’s military intervention in Afrin is a prelude to a wider offensive against other cities under the control of Syrian Kurdish forces.

As experts are scrambling to understand the reasons behind the YPG’s withdrawal, Aron Lund, a prominent Middle East expert, observed that the Syrian Kurdish fighters didn’t receive the support from the international community they had hoped.

“Thrown to the wolves by its only powerful defender in Afrin [Russia], the YPG could not hold out for long. By early March, all that remained was the question of whether to pull out to save lives or mount a hopeless last stand to score political points,” Lund wrote.

Turkey’s Operation Olive Branch, which began Jan. 20, concluded its 58th day with a Turkish flag hoisted over Afrin’s city center. At the same time, Turkey-led FSA factions, including Salafi jihadi groups, were busy plundering the city. The images emerging from the city resembled the taking of a medieval era war booty.

“After chasing Kurdish fighters from Afrin, the pro-Ankara fighters broke into shops, restaurants and houses and left with foodstuff, electronic equipment, blankets and other goods, the correspondents said,” AFP reported. “They placed the loot in cars and small trucks and drove them out of the city.”

The clashes between the Turkish army and YPG fighters had unleashed a humanitarian crisis. Thousands of people who fled the region weren’t able to reach shelters and had to sleep outdoors with no food or water.

“The UN estimates that nearly 100,000 civilians were displaced from Afrin before the city fell on Sunday. Kurdish officials and humanitarian sources put the number at more than 150,000, out of the enclave’s total estimated population of 323,000,” Lund wrote. “Most had gathered in the district’s capital, which had filled up with desperate civilians even after water supplies were cut off in early March.”

One of the first acts of the FSA fighters was to demolish a statute of a mythical figure in Kurdish history: Kawa. Kawa is a Kurdish legend who represents the resistance and freedom.

One of the first acts of Turkish fighter jets in the first week of the operation was to reduce a 3,000-year-old temple into rubble: Ain Dara, a Syro-Hittite temple that had existed since 1300 B.C.

The eradication of Afrin’s cultural heritage and the destruction of its ethnic identity have sparked an international outcry.

“It appears the majority of the population of the city, which is predominantly Kurdish, evacuated under threat of attack from Turkish military forces and Turkish-backed opposition forces,” the US State Department said in a statement March 19. “We are also concerned over reports of looting inside the city of Afrin. We have repeatedly expressed our serious concern to Turkish officials regarding the situation in Afrin,” the statement added.

However, the move was a day late and a dollar short, and it had no impact on Turkish President Recep Tayyip Erdogan, who considers the State Department statement yet another display of American weakness or indecisiveness.

“Now they are expressing their concerns about Afrin. Where were you when we were expressing our concerns? Where were you when we offered you to eradicate these terrorist organizations jointly,” Erdogan said March 20 addressing his party’s parliamentary group. “If you’re our strategic partner, then you have to respect us and walk with us,” he added.

Experts now warn of a looming crisis between Ankara and Washington on Manbij, which Erdogan pointed out as the next target for the Turkish forces.

“The problem is that if the United States did what Turkey wants, the result would be bloody chaos in Manbij that might cascade south and east, unraveling the stability that was bought at such cost,” seasoned journalist David Ignatius wrote. “A reasonable goal would be a gradual withdrawal by the United States and SDF [Syrian Democratic Forces] from Manbij, as the Afrin conflict ends and there’s a de-escalation in northern Syria.”

Now two questions persist: How will Turkey’s military achievement translate into politics, and how long will the Turkish military stay in Afrin?

The best example to find answers is the Euphrates Shield region, which came under control of the Turkish army and FSA forces in March 2017. Since then, Turkey’s grip on the region has only tightened. Jarablus, al-Bab and Azaz are being ruled by officials appointed by Ankara. Turkey resettled some 140,000 Syrians in the region, and Afrin will probably witness a similar process.

However, unlike the Euphrates Shield region, Afrin is more homogenous, with an overwhelmingly Kurdish population. Some 90% of its inhabitants are — or at least were — Kurds, according to Fabrice Balanche, a prominent Syria expert.

“It is also a very combative region. Three-quarters of YPG leaders hailed from Afrin,” Balanche wrote. “[Erdogan] has also dealt a blow to the Kurds of his own country, who were following with hope the experience of territorial autonomy of the Syrian Kurds.”

As for Erdogan’s threat to expand the military intervention in other regions controlled by Syrian Kurdish forces, "Why would he stop, since no one has reacted so far?” Balanche asked.

The only forces that can prevent Turkey from going after the Kurdish fighters in other parts of Syria are the United States and Russia.

Therefore, Afrin didn’t turn into “Turkey’s Vietnam,” as the YPG vowed in the first week of the offensive, but instead might have morphed into Washington’s nightmare.