Turkish troops and Turkey-backed forces took control of the Syrian city after the Kurdish militia in power there withdrew and are now eyeing what Turkey's president calls a “terrorist corridor” along its border. 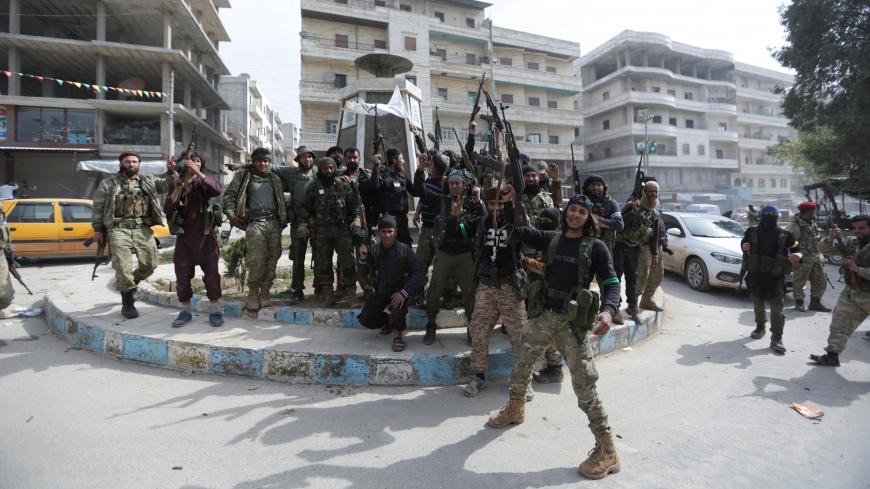 Turkish-backed forces faced little resistance when they rolled into the Syrian city of Afrin, seizing a Kurdish stronghold and knocking back their dreams of self-rule in northern Syria.

NATO member Turkey’s blitz in Afrin has further complicated Syria’s seven-year war, which has also drawn in external powers Russia, Iran and the United States. President Recep Tayyip Erdogan vowed on Monday his army would press on to undo Kurdish territorial gains all the way to Iraq.

A faction of the Free Syrian Army, backed by Turkish tanks and warplanes, entered Afrin on Sunday, just two months after Turkey launched an offensive to expel the People’s Protection Units (YPG) from the northwest Syrian province, arguing the Kurdish militia posed a security threat at its borders.

Civilians escaped the arrival of the FSA forces in Afrin, which had a pre-war population of 35,000 people, as the fighters raised their rebel flag and the Turkish banner in the city center, news footage showed.

“The symbols of peace and security now wave in Afrin’s city center, not the rags of the terrorist organization,” Erdogan said in a speech hours after the city fell. “Most of the terrorists tucked their tails between their legs and fled. Our special units and members of the Free Syrian Army are cleaning up the remains of the sword and the traps they left behind.”

Turkish newspapers celebrated the fall of Afrin for coinciding with the 103rd anniversary of an Ottoman victory in the battle of Gallipoli during World War One.

Turkey sees the YPG as part and parcel of the armed Kurdistan Workers Party (PKK), which has waged a three-decade insurgency within Turkey that has killed more than 40,000 people, and the United States’ collaboration with the YPG as a betrayal.

Before Turkey had encircled Afrin, analysts had warned it would face bloody urban street battles. But the YPG withdrew before dawn on Sunday without putting up a fight.

“Withdrawal from one battle doesn’t mean [the loss] of war and giving up the struggle,” tweeted Saleh Muslim, the former chairman of the Democratic Union Party, the YPG’s political wing.

In a statement, the YPG said its fight would now enter a new stage, transitioning from direct confrontation to “hit-and-run tactics." It read, “Our forces are everywhere in Afrin. These forces will strike the positions of the Turkish aggression and its mercenaries at every opportunity,” promising “a constant nightmare for them.”

The YPG decided to pull out to prevent more civilian deaths in an area that had been largely peaceful before the Turkish incursion, absorbing thousands of displaced Syrians fleeing fighting elsewhere, said Mutlu Civiroglu, an independent Kurdish affairs analyst, citing sources within the Kurdish administration.

“From the perspective of Kurds, naturally it is a demoralizing situation when Afrin had been spared throughout the war and is home to different cultures. But there is also the feeling among Kurds that this isn’t over,” Civiroglu told Al-Monitor. “They don’t assess this as the fall of Afrin. The YPG is saying that it is changing its war tactics from holding ground to undertaking raids,” he said.

For his part, Erdogan said Afrin was merely a “comma” in Turkey’s battle against Kurdish militants. “We will now add the full stop, God willing … We will now continue to Manbij, Ain el-Arab, Tal Abyad Ras al-Ain and Qamishli until the terrorist corridor is gone,” he said, adding that Turkey was prepared to go into Northern Iraq’s Shinjar region, where PKK fighters are based.

Moving deeper into Syria could put Turkey dangerously close to an estimated 2,000 US special forces, who are in the vicinity of the city of Manbij.

“We just march on and undertake any sacrifice to protect our vital interests. We did that before, we did that in Afrin today, and we will do it in Manbij and the east of the Euphrates in Syria tomorrow,” Ilnur Cevik, a senior adviser to Erdogan, wrote in Daily Sabah.

US State Department spokeswoman Heather Nauert said in a statement Washington is “deeply concerned” by the humanitarian situation in Afrin after people were forced to evacuate.

Federica Mogherini, the European Union’s top diplomat, said Turkey’s incursion did not comply with international efforts “aiming at de-escalating the military activities and not escalating them.”

Turkey already faced criticism from its Western allies for ignoring a United Nations cease-fire introduced for all of Syria last month, saying it did not apply to its fight against what it deems terrorism.

Erdogan said his soldiers had avoided harming civilians in the operation. “We did not take even the smallest step that would have led to a single civilian’s nose bleeding, because we did not go to occupy. We only went to eliminate a terrorist group and for peace,” he said.

But the United Nations said on Friday it had received “deeply alarming reports” about civilian deaths in Afrin and estimated about 50,000 people were displaced from the city before it fell.

Nearly 300 civilians were killed by Turkish aerial, artillery and missile strikes since the operation began, according to the Syrian Observatory for Human Rights. The Britain-based monitor also said it had received reports that FSA fighters had looted private homes and public offices after taking Afrin.

Kurds in Northern Iraq were holding three days of mourning in “solidarity” with their brethren in Afrin after the governor of Sulaimaniyah announced the district would mark a “Nowruz of mourning in solidarity with the people of Afrin.”