In the northern countryside of Aleppo, the Syrian Democratic Forces, an alliance of Arab and Kurdish fighters, retaliates to the shelling from Turkish-backed Syrian rebels, pushing civilians to leave their homes. 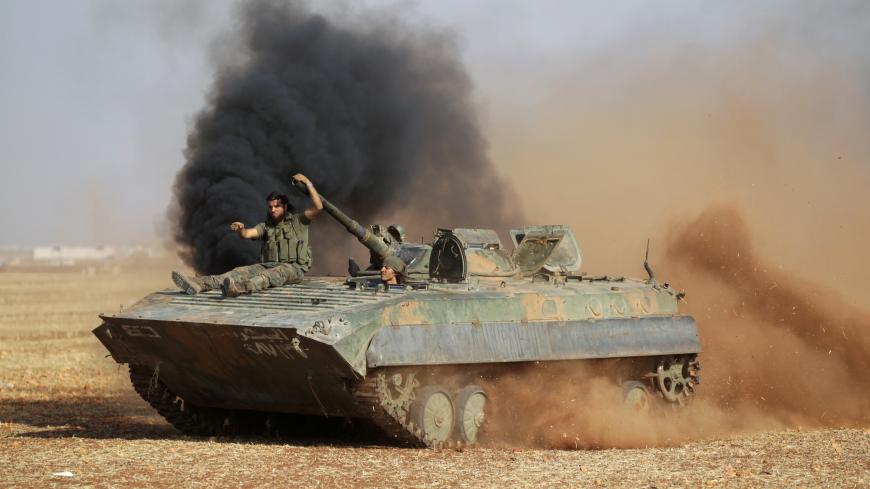 ALEPPO, Syria — Abu Rami, 35, cannot stay in his own house at night, as he fears that while he and his family are asleep, his village would come under artillery barrage.

Each night, Abu Rami packs his luggage, including blankets and sponge mattresses, and leaves with his family of five to a tent he set up among the olive trees, about 2 kilometers (1.2 miles) to the east of his house.

Kaljibrin is subject to daily mortar shells and artillery barrage by the Syrian Democratic Forces (SDF), which controls the nearby village of Ayn Daqnah.

On Aug 29, Abu Rami took Al-Monitor on a tour of his village, as he showed us the house of one of his neighbors where a shell was shot onto his roof and breached the roof. “Fortunately, the neighbors were not at home. As soon as the first shell was dropped [in the village], they rushed to the nearby groves. … The third shell struck their house,” Abu Rami said.

The northern Aleppo countryside, near the contact point between the FSA and the SDF, has been the scene of recent mutual bombings, as Turkish military bases shell the SDF-controlled territories along the contact line. And in turn, the SDF retaliates by bombing FSA-controlled areas. As a result, civilian casualties are heavy on both sides.

Since its entry into Syrian territory on Aug. 24, 2016, the Turkish army has established several military bases in the north of Aleppo, within the scope of Operation Euphrates Shield. The exact number of these bases is not known, but they are said to include tanks, artillery and communication centers.

About a kilometer from the town of Kaljibrin, the Turkish army has set up a military base, and its high observation tower can be seen from a distance. The base launches artillery shells targeting the nearby SDF-controlled territories. When shells are fired from the base bombing SDF territories, the SDF uses it as a justification to bomb the village.

Residents of the northern Aleppo countryside are constantly concerned over this shelling, as they believe that the Turkish bombing of SDF-controlled territories is the reason behind the latter’s shelling of theirs.

“When the shelling starts, we leave our village to the nearby groves, or find shelter in basements. However, we are always worried when we hear Turkish shelling of the SDF, as we know the day wouldn’t pass without misery. The SDF always retaliates by bombing us,” Abu Rami added.

According to the SDF, it only targets the areas from which they are attacked. However, the shelling usually targets populated areas. On Aug 16, two people were killed and five were injured in Kaljibrin due to shelling by the SDF.

As the shelling continues, thousands are displaced from villages located near the contact line between the FSA and the SDF. However, Abu Rami refuses to leave his house, as he has no other shelter. He cannot stand living in camps, as they are “extremely crowded and have poor services.”

According to the Kaljibrin local council, the population in the village is estimated at 8,000, after 5,000 were displaced to camps and villages far from the contact line in the last few months. Wael Sheikho, a member of the Kaljibrin council, told Al-Monitor that many of the local residents of the village were originally displaced from other cities and are threatened with injury or death as long as the shelling continues.

Although the shelling continues, life in the village goes on. Shops in the village market are still open, as they are situated on a key road that connects the Bab al-Salam crossing on the Turkish border with Marea and the surrounding towns and villages.

Al-Monitor left Kaljibrin village and traveled to Marea, 27 kilometers (16 miles) north of Aleppo, after reports of its bombing by the SDF spread on social media. On our way, we could clearly hear the sounds of mutual bombing between Turkish military bases and the SDF territories.

On the outskirts of Marea, we watched a pall of smoke settle over the city due to heavy shelling on Aug. 29. In the field hospital, six people from one family were already injured by the shelling, including a woman with severe injuries who was immediately transferred to a Turkish hospital as local hospitals could not perform the operation, according to her medical staff.

“Almost on a daily basis we receive injuries due to the SDF’s bombing of the countryside villages in northern Aleppo. In August so far, our hospital received 61 injured people, including four who died of their injuries,” Tatek Najjar, the director of the field hospital in Marea, told Al-Monitor.

About 42,000 people now live in Marea, according to statistics by the Marea local council. Since Turkey announced the end of Operation Euphrates Shield on March 29 when the Islamic State was expelled from the area, people started returning to the northern Aleppo countryside as they felt safe, Abdullateef Darweesh, an information officer at the Marea local council, told Al-Monitor.

“The mutual bombing on the area is making people more worried and unstable. Therefore, they think of displacement and encourage their relatives not to return to the area in the meantime,” Darweesh said.

Since talks began in early July about a Turkish military operation toward Afrin against the SDF, the intensity of mutual bombing in the northern Aleppo countryside between the Turkish military and the SDF, which the People’s Protection Units constitutes most its forces and which Ankara considers to be a terrorist organization, has increased.