Is Saudi Arabia 'ready to turn page' on Iran?

A shifting regional landscape may force a reset in Riyadh and Tehran; armed groups backed by the United States and Turkey battle outside Aleppo. 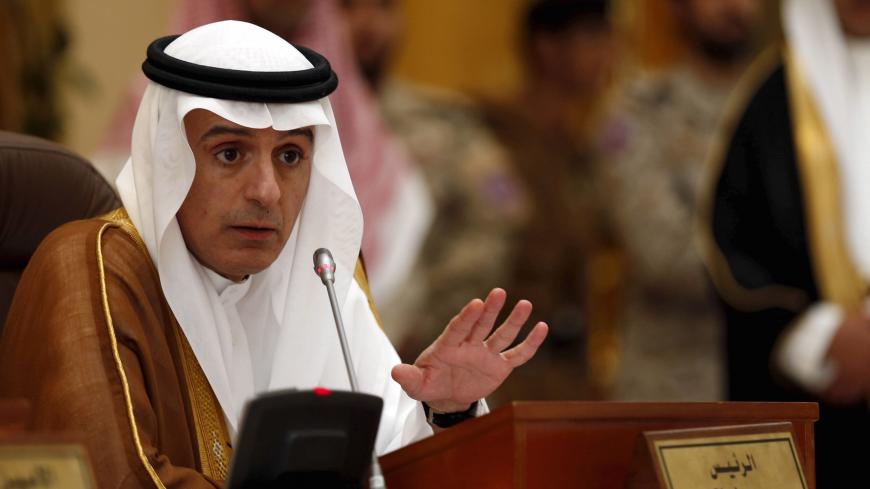 Iranian Foreign Minister Mohammad Javad Zarif told Al Mayadeen TV on Sept. 6, “We are prepared to cooperate with Islamic countries on all issues that are important to the Islamic world. … If the Saudi government is ready to turn the page, Iran is ready for that as well."

Although Saudi Foreign Minister Adel al-Jubeir termed Zarif’s gesture as “laughable,” there are signs that a slow thaw may be in the works, the result of a shifting regional landscape.

The Iran-Saudi Arabia fault line runs deep, as they back different sides in the Syria and Yemen wars. In September 2015, Iranian officials blamed Saudi officials for mismanagement following a stampede during the hajj in Mecca that left over 2,400 dead, including more than 400 Iranians. In January 2016, Iranian crowds ransacked the Saudi Embassy in Tehran following the kingdom’s execution of Saudi Shiite cleric Nimr al-Nimr. Riyadh broke ties with Iran soon after.

Despite Jubeir’s reaction to Zarif, the trend lines may signal a subtle reset. First, Iran and Saudi Arabia worked out arrangements for Iranian participation in the hajj this year, after Iran banned its citizens from pilgrimage last year. Both governments have downplayed pending visits by Saudi and Iranian officials to inspect diplomatic sites.

More importantly, Saudi Crown Prince Mohammed bin Salman may be seeking to cut his losses on costly involvement in the Syria and Yemen wars. United Nations Syria envoy Staffan de Mistura said Sept. 7 that the Syria war is winding down, and that “for the opposition, the message is very clear: If they were planning to win the war, facts are proving that is not the case. So now it's time to win the peace.” Saudi Arabia has continued to engage and rally the Syrian opposition to unite in support of UN-brokered discussions of a political transition.

In Yemen, the kingdom is facing increased international scrutiny for airstrikes on civilian targets.

The toll of the war on Yemen, including a cholera outbreak affecting over 500,000 people, more than half of them children, has been a public relations nightmare for Saudi Arabia — with no end in sight and the prospects of a chronic failed state on the Arabian Peninsula. Iran’s support for Houthi armed groups has served to prolong the conflict, but its intervention is low cost, relative to Saudi Arabia’s quagmire.

Another sign of shifts in Yemen’s political winds is the role of former President Ali Abdullah Saleh, who has attempted to patch up recent disagreements with his Houthi allies. Many believe Saleh may be playing all sides, including Saudi Arabia, in a bid to retain his decadeslong role as Yemen’s ultimate power broker.

The tipping point for Saudi Arabia may eventually be buyer’s remorse on the consequences of isolating Qatar. By shattering Gulf Cooperation Council (GCC) unity, Riyadh and its partners have lost their strategic depth, compelling states to cut their own deals with Iran. Not surprisingly, Qatar is first in, as we explained here last month. Oman has always preferred dialogue over confrontation. One wonders if Dubai, which has maintained solid commercial ties with Iran, may eventually influence Abu Dhabi, which has taken the lead on a much tougher line on Iran.

This all came to a head last week during the visit of the emir of Kuwait, Sabah Al-Ahmad Al-Jaber Al-Sabah, to Washington. The emir was quick to anticipate the crisis caused by the rupture with Qatar in June and immediately set about seeking to broker a reconciliation. During Sabah’s visit, a call brokered by US President Donald Trump between the Saudi crown prince and Qatari Emir Sheikh Tamim bin Hamad Al Thani appears to have gone badly, ending in further recriminations from both sides.

In retrospect, the US-Saudi-Islamic summit in May may have served as the high-water mark of an approach to regional affairs that was over before it started. Since the summit, the GCC has been facing its worse crisis ever. Meanwhile, Iran is building a network of partnerships — Iraq, Syria, Qatar, Turkey and Hamas, both Sunni and Shiite — which makes it increasingly the center of the action. The Saudi crown prince, who has set an ambitious course of economic and social modernization for his country, understands better than most the costs of declining assets. There are deep reasons for Saudi-Iranian hostility, and no turnaround happens quickly, especially in the Middle East. But the dividends of building bridges, rather than burning them, may be the lessons learned that will inform a reset in both Riyadh, Tehran and other regional capitals.

Turkey weighs US, Russian reaction to next steps in Syria

Mohammed al-Khatieb reports this week on the fighting between the US-backed Syrian Democratic Forces (SDF) and the Free Syrian Army (FSA) that is backed by Turkey on the outskirts of Aleppo.

The SDF is comprised mostly of fighters drawn from the Syrian Kurdish People’s Protection Units (YPG) that Turkey claims are linked to the Kurdistan Workers Party (PKK), which both Ankara and Washington consider a terrorist organization.

Khatieb writes that the village of Kaljibrin, which is controlled by the FSA and sits 18 miles north of Aleppo, “is subject to daily mortar shells and artillery barrage by the Syrian Democratic Forces (SDF), which control the nearby village of Ayn Daqnah.”

Khatieb explains, “The northern Aleppo countryside, near the contact point between the FSA and the SDF, has been the scene of recent mutual bombings, as Turkish military bases shell the SDF-controlled territories along the contact line. And in turn, the SDF retaliates by bombing FSA-controlled areas. As a result, civilian casualties are heavy on both sides. Since its entry into Syrian territory on Aug. 24, 2016, the Turkish army has established several military bases in the north of Aleppo, within the scope of Operation Euphrates Shield. The exact number of these bases is not known, but they are said to include tanks, artillery and communication centers.”

The battles between the SDF and thr FSA outside of Aleppo come as Turkey weighs further military action against the YPG in northern Syria, including in Afrin, which is opposed by both the United States and Russia, Semih Idiz writes.

Idiz reports, “The YPG announced Aug. 29 that Russian military observers would be deployed to Afrin and al-Shahba region in northwestern Syria ‘to coordinate with Kurdish and local forces with a view to maintaining security.’”

“The Russian move in Afrin and al-Shahba region also comes at a time when the United States issued a demarche to Turkey over ‘multiple attacks’ by the FSA on US troops in northern Syria in the past few weeks,” Idiz continues. “Some of these reportedly took place as US Defense Secretary James Mattis was in Ankara for talks. Col. Ryan Dillon, a spokesman for the US-led coalition against IS, said later that they 'reserved the right to defend themselves.' Many took this as a warning not just to the FSA but also to Turkey. Complicating matters is the fact that Ankara is said to be working with Russia for some kind of a trade-off between Afrin and the city of Idlib, which is held in part by the FSA and in part by Hayat Tahrir al-Sham, a successor group to Jabhat al-Nusra that is on Washington's and Moscow’s hit lists.”