Ankara must go through US, Russia to get to YPG

Recent developments on the ground suggest that any new Syria incursion by Turkey could encounter unexpected obstacles. 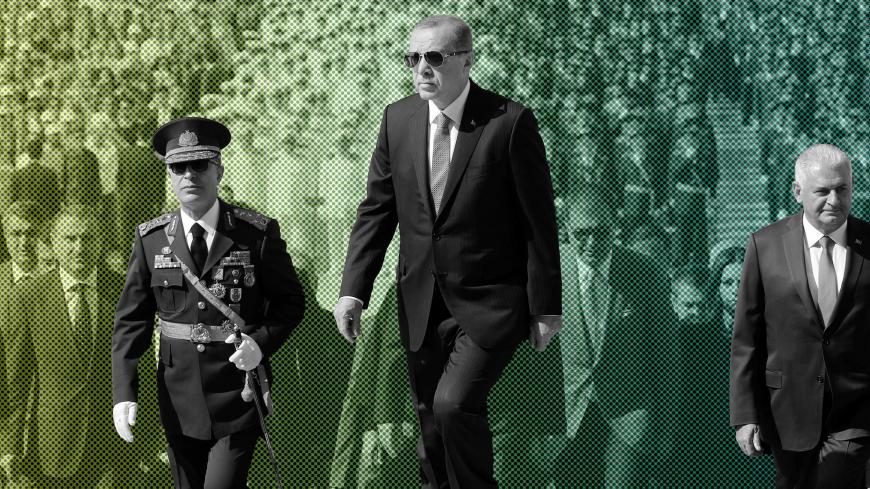 President Recep Tayyip Erdogan is keeping on the table the topic of a military operation against US- and Russian-allied Syrian Kurds operating under the banner of the People's Protection Units (YPG).

“Despite the problems we are having with our allies, we are not stepping back from our plans or operations,” Erdogan told his guests during the Victory Day reception Aug. 30.

“They have to know that we are preparing to do whatever we did with [Operation] Euphrates Shield,” he added, referring to the 216-day military incursion Turkey launched into northern Syria a little over a year ago.

Ankara said at the time that its operation would not only target the Islamic State (IS) but also other terrorist elements, which in this case means the YPG, a group Turkey says is a Kurdish terrorist group.

Erdogan suggested in early August that such an operation was imminent, but nothing has happened since then despite the beefing up of Turkish forces along the border.

In a recent op-ed for the pro-government Sabah, foreign policy expert Merve Calhan said Operation Euphrates Shield had ended without seizing the YPG-held city of Afrin, a stone’s throw from the Turkish border.

Ankara’s problem, however, is embedded in Erdogan’s reference to problems Turkey is experiencing with its allies. His words were generally perceived to be aimed at the United States, which refuses to ditch the YPG and list it as a terrorist organization.

“The US has been trying to expand its sphere of influence by using the [YPG]. For policymakers in the Turkish capital, Washington's steps amount to a thinly veiled effort to form a new state in northern Syria under YPG control,” Bostan said in his column on Sept 1.

But Turkey’s increasing reliance on Russia, given its deteriorating ties with the West, makes it reluctant to speak out against Moscow. Ankara is also keen on good ties with Moscow since it is about to conclude a deal for Russian S-400 long-range anti-missile systems.

Nevertheless, developments indicate that Russia may pose the main obstacle to a new Turkish operation against the YPG.

The YPG announced Aug. 29 that Russian military observers would be deployed to Afrin and al-Shahba region in northwestern Syria “to coordinate with Kurdish and local forces with a view to maintaining security.”

The Kurdish daily Rudaw, which carried the YPG statement, also reported that three civilians had been killed and 17 wounded recently by Turkish artillery fire on al-Shahba.

Ankara was silent on the YPG statement, which was not denied by Moscow. The Hurriyet daily, however, reflected the official mood when it broke this news with the headline “Shocking move from Russia in Afrin.”

Hurriyet said Russian military observers would also be deployed in the town of Tel Rifaat in al-Shahba region, which it said is currently held by the US-backed Syrian Democratic Forces (SDF), which is comprised mainly of YPG fighters. It said Tel Rifaat had been taken by the SDF in February 2016 from the Free Syrian Army (FSA) and has been the scene of clashes between the two groups since June.

The pro-government daily Star, on the other hand, claimed that Russia wanted to get hold of Afrin in order to restore it to the Syrian regime.

There are multiple revelations in these reports for Turks confused about developments in Syria. One of them is that the Turkish-backed FSA had lost Tel Rifaat to the US-supported SDF — although this is not new news.

Another revelation is that Russia is deploying military observers in parts currently held by the SDF. This suggests that Moscow is not only hobnobbing with the YPG but is also cooperating indirectly with Washington over protection for this group, which Russia also refuses to list as a terrorist organization.

Moscow's latest move mirrors the deployment of Russian “observers” to Afrin in May after deadly Turkish strikes on the YPG. The United States also deployed forces between FSA and YPG lines after the Turkish strikes.

Moscow is downplaying the significance of its latest move, as it did in May. Lt. Gen. Alexei Kim, the deputy commander of Russian forces in Syria, said that what was set up in Afrin at the end of August was “a national reconciliation committee.”

This statement suggests that Moscow’s move is innocuous but comes against the backdrop of Erdogan’s latest remarks about a new Turkish incursion into Syria.

News that the reconciliation committee would include YPG representatives was also unlikely to have gone down well in Ankara. Moscow’s efforts to try to convince Ankara that the Democratic Union Party (PYD), the YPG’s political wing, should be part of the Syrian talks have already displeased the Turkish government.

The Russian move in Afrin and al-Shahba region also comes at a time when the United States issued a demarche to Turkey over “multiple attacks” by the FSA on US troops in northern Syria in the past few weeks. Some of these reportedly took place as US Defense Secretary James Mattis was in Ankara for talks. Col. Ryan Dillon, a spokesman for the US-led coalition against IS, said later that they "reserved the right to defend themselves." Many took this as a warning not just to the FSA but also to Turkey.

Complicating matters is the fact that Ankara is said to be working with Russia for some kind of a trade-off between Afrin and the city of Idlib, which is held in part by the FSA and in part by Hayat Tahrir al-Sham, a successor group to Jabhat al-Nusra that is on Washington's and Moscow’s hit lists.

Despite much talk in this context about “de-escalation zones,” no progress has been reported yet. Meanwhile, US interest in taking on Hayat Tahrir al-Sham and other such groups in Idlib is increasing.

How Turkey hopes to mount a successful operation in Syria under these conditions remains unclear.

Bostan said diplomacy will be required before any new Turkish operation begins.

He said the “only obstacle before the operation is to handle the diplomatic aspects. In order to get results from military engagement, it is necessary to accurately predict how each player will behave on the ground.”

He pointed to the recent talks in Ankara with Mattis as well as with Russia’s and Iran’s top generals, and he maintained that “plans regarding Afrin have become clearer” as a result of these.

In the light of recent developments, it could just as easily be argued that rather than trying to accommodate Ankara over Afrin, those negotiations were aimed at trying to stay Turkey’s hand.

They may be global rivals, but the United States and Russia seem to have a common interest in prioritizing the fight against Islamic terrorism in Syria. They also don’t agree with Turkey on the YPG or the PYD. It seems Ankara will have to overcome this obstacle first before it hopes to make any headway against its Kurdish nemesis in Syria.