Free Syrian Army factions are holding major military drills and parades to beef up their combat readiness to take part in the Turkish military operation against Kurdish forces in northern Syria. 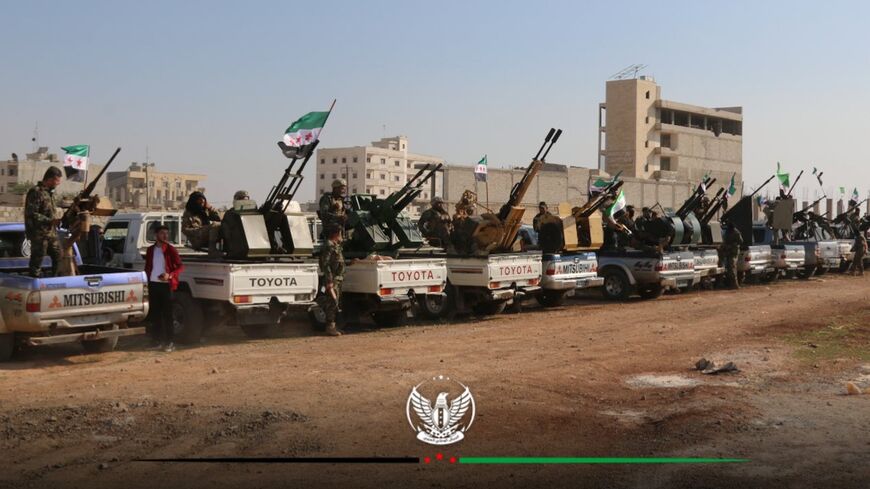 The FSA-affiliated Third Legion announced on June 6 its readiness to take part in the battle against the Kurdish-led Syrian Democratic Forces (SDF). The faction published pictures on its Twitter account on June 6 showing hundreds of its heavily armed fighters near the city of Azaz north of Aleppo.

In another Twitter post on June 7, the faction said that “all Third Legion forces were military ready for the upcoming battles against the SDF in the Tal Abyad area of the northern countryside of Raqqa.”

Hisham Skeif, an official in the public relations office of the Third Legion, told Al-Monitor, “The Third Legion is well prepared for the battle against the SDF, as it recently conducted live-fire maneuvers to put the fighters’ combat readiness to the test. These maneuvers included [training on] most types of weapons and units including the infantry.”

“We are now in the highest state of combat readiness and are waiting for a sign to start the battle. All our fighters have joined their military barracks and all the logistical preparations have been completed. Launching the operation at this stage is an ideal step for us and the Turkish allies, as Russia is in a political and military predicament. We must seize the opportunity,” Skeif added.

For his part, Brig. Gen. Abdul Razzaq Mohammed, chief of staff of the Third Legion, told Al-Monitor, “We have given orders to raise the readiness of all armed groups and we have carried out an inspection of weapons and personnel, and everyone is ready for the battle, which is expected to be launched within several days if there are no international interventions. Everyone is aware that Syria is now subject to international understandings.”

Mohammed added, “For now, we do not know where the Turkish military operation will exactly take place, and this is not important. They are all Syrian areas occupied by the SDF. It does not matter if it is Tal Rifaat, Manbij or the east of the Euphrates. We are ready for any location, and we conducted maneuvers and are ready to fight in both regions, be it in the countryside of Aleppo or in the Peace Spring areas in the east of the Euphrates.”

On June 4, Hayat Thaeroon for Liberation, affiliated with the Turkish-backed FSA, tweeted that it had conducted “trainings to raise the physical fitness and combat readiness of its fighters, and completed preparations for the upcoming military operations.”

Hayat Thaeroon for Liberation began on June 2 joint military maneuvers with the Turkish army in the Peace Spring area in the east of the Euphrates ahead of the potential Turkish operation aimed at expelling the SDF from northeastern Syria.

Video recordings posted on YouTube by Hayat Thaeroon for Liberation show its deputy military commander, Seif Abu Bakr, talking to hundreds of fighters about the necessity of taking part in the battle alongside the Turkish army.

Several other video clips posted on social media showed more than 2,000 fighters from various FSA factions taking part in military exercises and maneuvers in which they used live ammunition, tanks and military vehicles, in addition to medium weapons to inspect the combat readiness for the upcoming battle.

A military commander in Hayat Thaeroon for Liberation told Al-Monitor on condition of anonymity, “The military maneuvers that we conducted in partnership with the Turkish army are important in raising the morale of the fighters after a hiatus in offensive military actions. These maneuvers help the fighters restore their self-confidence all the while ensuring that they are ready for battle.”

He added, “The joint maneuvers with the Turkish army also give our fighters additional experience as well as new information about dealing with new types of weapons and military equipment owned by the Turkish army that are supposed to be used in the battle.”

On June 2-3, the FSA-affiliated Liberation and Construction Movement conducted a military parade with live ammunition in the Peace Spring area. During the parade, the movement showed the preparations of hundreds of its fighters to participate in the upcoming battle against the Kurdish forces.

Hayat Thaeroon for Liberation, the Third Legion and the Liberation and Construction Movement are large military alliances, each of which includes several factions affiliated with the FSA. There are no accurate statistics about the number of fighters in these three military alliances, but the numbers are huge just like their military equipment, thanks to the Turkish support they are provided with.

In parallel with the FSA preparations for the supposed battle, the Turkish army continues to beef up its presence in the vicinity of the Tal Rifaat area in the northern countryside of Aleppo. It also sent similar reinforcements to the Peace Spring areas on the borders of the SDF-controlled Ain Issa area in the north of Raqqa province.

On June 3, the town of Sejou north of Azaz, in the northern countryside of Aleppo, witnessed a similar demonstration whose participants called to regain control of their areas controlled by the SDF.

Shahham Arfad, a journalist and director of the media office in Tal Rifaat, told Al-Monitor, “More than 250,000 displaced people living in camps near Azaz are anxiously awaiting the start of the Turkish battle against the SDF in the northern countryside of Aleppo. They were all displaced in early 2016 by the SDF from their houses in Tal Rifaat, Fafeen, Kafr Naya and Sheikh Issa, among other northern Aleppo towns, back when the SDF took control of the area.”