Is Syrian government withdrawing from Tal Rifaat in favor of Turkey?

FSA forces are carrying out military maneuvers in preparation for the battle against Kurdish forces in Tal Rifaat, while Turkey is bringing in more reinforcements. 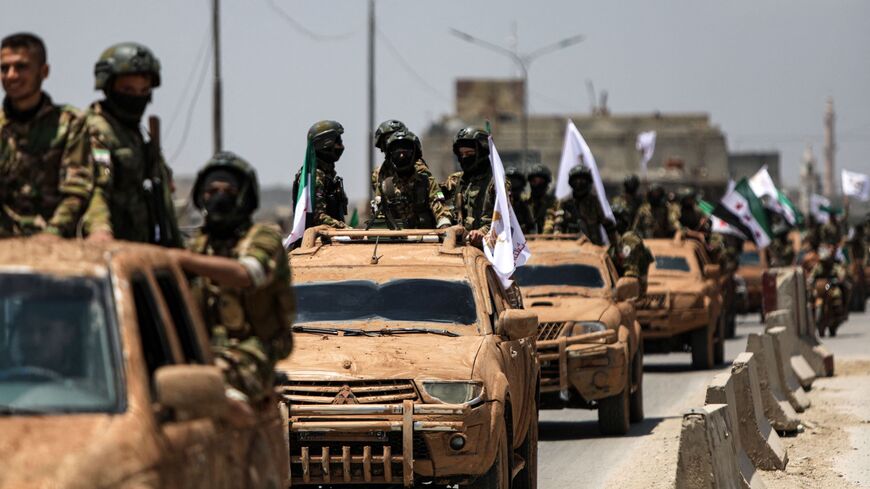 Turkish-backed Syrian rebel fighters are pictured in the border town of Azaz in the rebel-held northern part of Aleppo province, as they head toward an area facing the Kurdish-controlled town of Tal Rifaat, on June 9, 2022. Turkey's President Recep Tayyip Erdogan on June 1 renewed threats of a military offensive in northern Syria, which he said would target Kurdish "terrorists." - BAKR ALKASEM/AFP via Getty Images

The Tal Rifaat Military Council affiliated with the Turkish-backed Free Syrian Army (FSA) factions has recently been carrying out military drills, using military vehicles and heavy machine guns in preparation for a Turkish military operation in the city that is controlled by Kurdish forces.

Although the Turkish incursion into northern Syria seemed to take a backseat in recent days, movements on the ground point otherwise.

Turkey has been sending troops and military logistical equipment to border areas with Syria and has already installed jamming systems for drones, according to the Syrian Observatory for Human Rights (SOHR).

The SOHR said that a new military convoy of Turkish forces entered areas in northern Syria through the Bab al-Salama border crossing on July 4. The convoy, made up of tanks, armored vehicles, artillery, troop carriers and various military vehicles, headed to Turkish bases in the northern countryside of Aleppo, the war monitor added.

Quoting its own sources on the ground, the SOHR that Russian patrols inspected on July 3 the positions of government forces that were targeted by a drone in Tal Rifaat and on its outskirts in the northern countryside of Aleppo, and it is believed that this drone belongs to the Turkish forces present in that area.

Suspected Turkish drones targeted on July 3 two military points in Tal Rifaat, the first belonging to the Kurdish-led Syrian Democratic Forces (SDF), and the second to the Syrian government, while military skirmishes took place on the axis of the northern countryside of Aleppo between the FSA and the SDF.

The Autonomous Administration of North and East Syria said in a statement on its official Facebook page on July 5 that it held an emergency meeting to discuss the political situation and is on alert for any possible war amid the Turkish threats to start a military operation to occupy Syrian areas under the control of the Autonomous Administration.

“We are in a state of war and we must act on this basis, taking into account all the necessary preparations to face this and the necessary budget has been allocated to confront the negative repercussions of the possible war,” the statement read.

On July 7, media outlets close to the Syrian government revealed that the government and the SDF are close to reaching an agreement on the establishment of a joint operations room under the sponsorship of Russia, as part of efforts to counter the anticipated Turkish operation in northern Syria.

In this context, an FSA leader told Al-Monitor on condition of anonymity, “We have drawn up all the plans for the attack and made the necessary preparations. The battle is very close, and we have informed the Turkish side to stay on alert and prepare for a full-blown war. The main battle axis will certainly be the city of Tal Rifaat, which is occupied by the Kurdish forces. We have fighters from Tal Rifaat in our ranks who are eager to liberate their city from the Kurdish militias, and they are fully prepared and longing to wage this battle as soon as possible.”

Hisham Askif, a member of the Public Relations Office of the FSA’s Third Legion, who is based in the northern countryside of Aleppo, told Al-Monitor, “The pace of preparations has increased dramatically over the past four days. We are now in a state of maximum readiness, and we have recently carried out military drills with live ammunition in preparation for the battle. We trained and mobilized troops, and our forces took their positions on the front lines, waiting for our signal. The regime recently carried out drills in Tal Rifaat, but we have seen this before; it is unable to clash with the Turkish army, so its forces will withdraw from Tal Rifaat as soon as the battle is announced, which could be any day now.”

Askif added, “Turkey has recently sent dozens of vehicles and equipment for this battle. All I can say is that we are very close, but we cannot tell the media exactly when the battle will begin.”

Turkey has repeatedly threatened in the past weeks to launch an operation on its southern border with Syria to clear it of Kurdish forces, although it seems to have been postponed. But more recently, on July 1, Turkish President Recep Tayyib Erdogan stressed that Turkey is gradually working to prepare for the “largest military work” in Syria in the coming period.

Speaking to reporters in Istanbul, Erdogan added, “We could come suddenly one night. … There is no need to rush. We are effectively [preparing for the battle] now.”

Firas Faham, a researcher at the Jusoor Center for Studies who lives in Turkey, told Al-Monitor, “The regime forces brought reinforcements to Manbij and Ain Issa, and the regime forces did not withdraw from Tal Rifaat. But Russia does not consider Tal Rifaat of strategic value. Russia could thus allow Turkey to carry out a military operation to control the city if Moscow reaches understandings with Ankara on various issues, such as the passage of wheat through the Turkish straits.”

He added, “Russia is also apprehensive about Turkey since the latter did not object to the accession of Sweden and Finland to NATO, so Moscow is concerned about Ankara changing its position. This is why Russia wants to reassure Turkey, so it remains neutral regarding the Russian-Ukrainian conflict, and it also wants assurances from Turkey about its noncompliance with the sanctions imposed on Russia by the West.”

Faham noted, “After achieving these understandings between the two parties, Russia can retract its opposition to the Turkish military operation against the Kurdish forces. However, one should expect some Russian reservations on the expansion of operations so as not to include the areas of Manbij and Ain Issa, as Moscow considers these areas more strategic than Tal Rifaat.”