Russia briefly withdraws from bases in north Aleppo, leaving SDF to face Turkey by itself

Russia briefly withdrew its forces and its military equipment from two bases in Tal Rifaat, only to return to them in the wake of understandings with the Kurdish-led Syrian Democratic Forces that control the area and fear the advances of the Turkish-backed opposition. 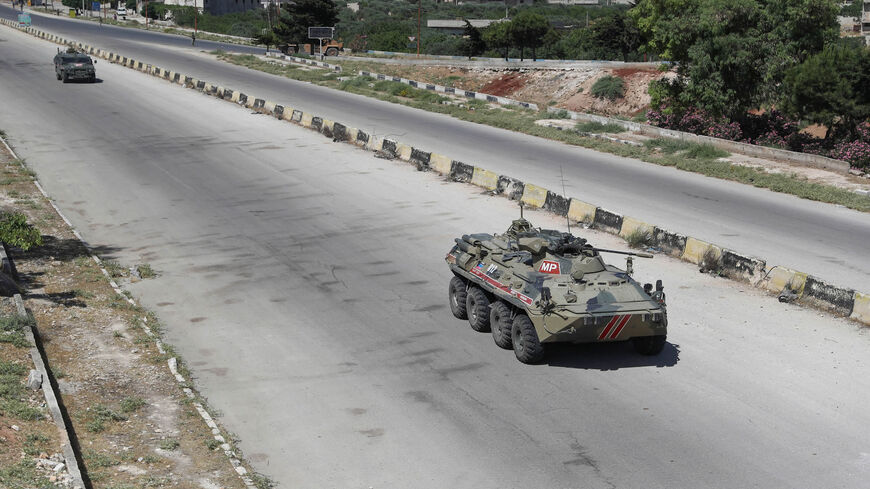 Russian armored vehicles drive as part of a joint Turkish-Russian military patrol along the M4 highway, which links the northern provinces of Aleppo and Latakia, near Ariha in the rebel-held northwestern Idlib province, Syria, June 10, 2020. - Omar Haj Kadour/AFP via Getty Images

Russian forces withdrew April 13 from two military bases in the town of Tal Rifaat in the northern countryside of Aleppo, namely the main base of Tal Rifaat on the Gaziantep international road and the Kashtar base near the town of Deir Jamal in northern Aleppo.

The Kashtar base is important for the Russians and the Kurdish-led Syrian Democratic Forces (SDF), as it is adjacent to the frontlines with the Turkish army and its allied Syrian National Army (SNA) affiliated with the Free Syrian Army.

More than 100 Russian soldiers, including officers, were deployed in these two bases in Tal Rifaat and Kashtar — home to heavy military equipment and vehicles equipped with jamming devices. They all withdrew and took the Tal Rifaat-Fafeen road toward the city of Aleppo.

The withdrawal unfolded over five phases. The first convoy left the base via the Tal Rifaat road, while the second took the road near the town of Fafeen, followed by three other convoys. Most of the retreating Russian forces headed to the Officers Club in al-Furqan neighborhood under the control of the Syrian government in Aleppo. The club is also deemed as one of the most important Russian posts in the city.

A military source from the SDF told Al-Monitor on condition of anonymity, “Several meetings were recently held with the Russian forces. During each meeting, the Russian side would set new conditions in order for it to remain deployed in the region.”

He said, “Russia cannot completely withdraw from the area, as it mulls over increasing its deployment, and it does not want the expansion of Iranian forces in the region. The Russian forces are deployed at six bases in the area, namely in Tal Rifaat, Sherawa, Kashtar, Teneb, Tal Ajhar and the Menagh air base in northern Aleppo. The Russian troops withdrew from two bases only, which infers that they are not set to fully withdraw."

The source noted, "The Turkish army and the SNA cannot advance to control that area due to the deployment of Iranian forces [to protect the Shiite-majority towns of Nubl and Zahraa], the Syrian regime forces, Jaish al-Thuwar [fighting alongside the SDF] and our forces [the SDF], as well as the Russian forces.”

He added, “We were not aware that the Russian forces would empty their bases in the region. The step came as a surprise for us. We asked to hold a meeting with the Russian forces afterward to find out the reasons, and we agreed to stop the military operations against the Turkish army and to provide grains and foodstuffs to the regime areas. We also agreed to discuss matters on condition that the Russian convoys return to the points they withdrew from. They indeed returned one day after the withdrawal, as it is not in our interest to lose an ally like Russia in this complex region [to prevent the advances of the Turkish army]."

Ziyad Hajj Ubaid, a commander in the Sultan Muhammad al-Fateh Division of the First Legion of the SNA, told Al-Monitor, “The withdrawal of the SDF from Tal Rifaat and the 21 villages surrounding it, including Manbij, in order for the SNA to enter and control the area has not been off the Turkish-Russian negotiations table. This is especially true as the SDF heavily bombs cities and towns in the northern countryside of Aleppo under the control of the SNA, namely in Afrin, Azaz and Marea. The [SDF forces] are also sporadically targeting Turkish territory, most recently Kilis province in southern Turkey, which the Turkish army responded to. The forces also carried out repeated infiltration operations targeting military resistance centers and points in those areas. But there is currently nothing official.”

Asad al-Zoubi, a military analyst and strategic expert, who is a dissident Syrian government officer residing in Jordan, told Al-Monitor, “The Russian withdrawal from Tal Rifaat is probably aimed at paving the way for the evacuation of the entire area to allow the Turkish army and SNA forces to launch a military operation with the aim of controlling the city and expelling SDF forces that have bombed their areas. This is especially true considering that the international road that connects the Turkish city of Gaziantep to Aleppo passes through Tal Rifaat and the surrounding villages via the Bab al-Salama crossing in Azaz, which is controlled by the SNA factions supported by Ankara.”

He noted, “But what happened cannot be deemed as a withdrawal, as Russia has kept its forces deployed in other posts. This can be simply deemed a rotation of troops as they returned the next day. Moreover, the Russian side did not inform its Turkish counterpart of its intention to withdraw from the area, as it is not seeking to do so at the current stage. This is why it is safe to say that the time has not yet come for the Turkish forces to enter Tal Rifaat."

Zoubi concluded, "But Russia is not ready to lose Turkey over Tal Rifaat and might withdraw from it in light of the developments in Libya, Ukraine and Azerbaijan. The Russian withdrawal may leave the SDF alone in the face of Turkey.”