Syrian President Bashar al-Assad’s forces are sending military reinforcements to Tel Rifaat to confront any possible military operation that the Turkish army and the Turkish-backed Free Syria Army may launch. 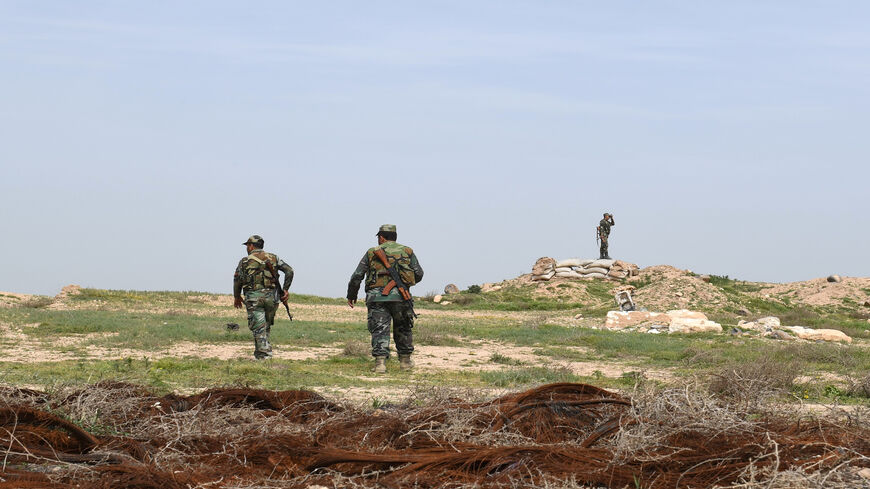 ALEPPO, Syria — The Syrian government forces and their affiliated militias are still deploying military reinforcements in Tel Rifaat, which is under the control of the Kurdish People's Protection Units (YPG), in the northern countryside of Aleppo. The buildup comes in anticipation of a potential military offensive waged by the Turkish army and its allied Free Syrian Army (FSA) factions in the area.

According to the website, the Syrian government forces have recently conducted combat readiness tests and dispatched army units to Tel Rifaat and Manbij in northern Syria.

Another video recording published Oct. 17 by the same website showed the regime forces carrying out reconnaissance activities on the frontlines along the areas that the Turkish army and the FSA captured during operations Olive Branch and Euphrates Shield in the countryside of Aleppo.

On Oct. 18, Al-Watan newspaper, which is close to the Syrian government, reported that the Syrian army has increased its readiness in the countryside of Aleppo, specifically in the city of Tel Rifaat and at the Menagh military airport.

The newspaper quoted a military source as saying that qualitative reinforcements were deployed along the frontlines with the opposition-controlled areas.

In a news conference following a Cabinet meeting Oct. 11, Turkish President Recep Tayyip Erdogan threatened to launch a military action in northern Syria. The Turkish government had announced Oct. 10 that two of its soldiers were killed in an attack near Marea in the countryside of Aleppo.

The two soldiers were killed in a rocket attack launched from the town of Tel Rifaat by the Kurdistan Workers Party, according to a tweet by Turkish Interior Minister Suleyman Soylu.

On Oct. 15, Erdogan said he has “run out of patience” regarding some regions in Syria being the source of attacks on Turkey. He warned Turkey's struggle in Syria will follow a different path in the coming period, according to Anadolu Agency.

In mid-October, a Turkish reconnaissance drone released threatening leaflets on Tel Rifaat, urging civilians in the area to cooperate with the Turkish army in its upcoming military action against the city. The move ushered in a potential Turkish military operation toward the area, prompting the government and its allies to act.

Journalist Maged Abdel Nour said on Twitter, “Huge military reinforcements, including tanks and armored vehicles for [Bashar] al-Assad's militias and Iranian militias, deployed two days ago in the towns of Tel Rifaat, Kafr Naya and Menagh [military] airport. It seems the regime has real information about Turkey's intention to storm this area.”

The spokesman for the FSA-affiliated Syrian National Army, Maj. Yusuf Hammoud, told Al-Monitor, “We have monitored all the military reinforcements and convoys of the Assad regime and its Iranian allies that recently arrived in the Tel Rifaat area. It seems that the Assad regime does not want the YPG to lose the area to us [the opposition].”

He said, “The regime's buildup will not undermine our resolve. When the battle’s date is decided in partnership with the allies in the Turkish army, our forces will be ready to do what must be done to liberate these areas from the hostile forces.”

Hammoud pointed to a high level of coordination between the YPG and the government forces in the Tel Rifaat area. “We have recently observed that the [Kurdish] forces raised the flags of the regime and Russia on the roofs of their headquarters and military barracks. This is an attempt by the YPG to say that they are not alone and have allies who will prevent the battle,” he noted.

He added, “The cooperation between the YPG and Assad's regime in Tel Rifaat is not limited to the military side. They have recently mobilized their supporters in Tel Rifaat to stage protests in the city. Coordination in Tel Rifaat between the regime and its allies on the one hand and between it and the YPG on the other hand is of the highest level.”

The Assad government views Tel Rifaat as the gateway to the northern city of Aleppo. Losing it will allow the Turkish army to expel the YPG from it, which will bring the Syrian opposition factions closer to the strategic city of Aleppo.

So far, there are no indications about the timing of the military operation that Turkey has threatened to launch, or the areas it will target, despite the great focus on the Tel Rifaat area.

Most recently, on Oct. 22, hundreds of supporters of the YPG and the Syrian government staged a protest in Tel Rifaat against the Turkish military action, with protesters raising pictures of Assad.

On the same day, the Syrian state-run SANA news agency reported a mass gathering organized by Tel Rifaat citizens in the center of the town to protest the Turkish occupation and its brutal attacks on safe residential areas in the northern countryside of Aleppo.

SANA wrote, “The citizens of the town and neighboring villages raised national flags and banners calling for an end to the illegitimate Turkish presence on Syrian lands and its tools from terrorist organizations and their brutal crimes against Syrian citizens.”

On Oct. 23, the YPG also staged a mass protest in Tel Rifaat. The Syrian Kurdish Hawar news agency said thousands of Afrin residents rallied in Tel Rifaat against the “Turkish occupation threats” to launch a military offensive on Tel Rifaat and al-Shahba areas. Protesters chanted slogans in tribute to the people's resistance in these areas.

Meanwhile, posters of Assad have been hung on the streets of Tel Rifaat, reflecting the joint coordination between the YPG and the government in anticipation of any potential Turkish military offensive.