The Afrin Liberation Forces, which has escalated attacks against the Turkish-backed opposition in the Aleppo countryside, is being secretive about the sources of its support, weapons and training. 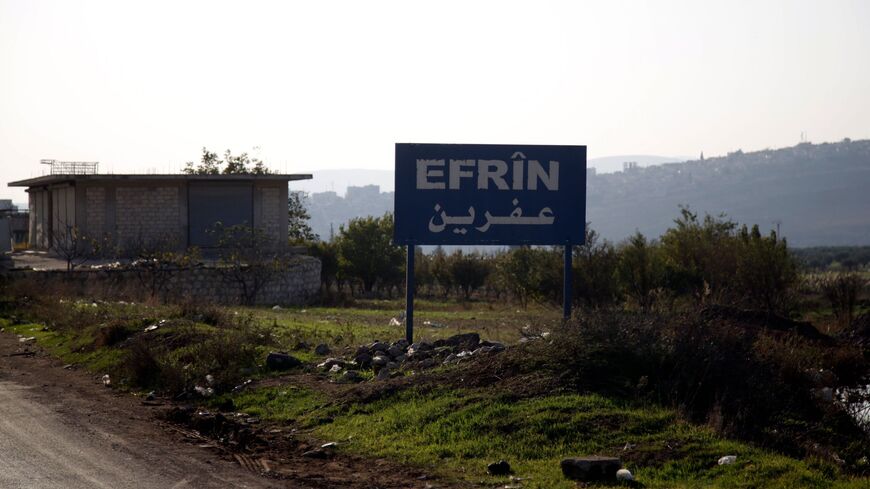 A sign for Afrin is seen on the side of a road on Nov. 19, 2018, in the northwestern Syrian city. - BAKR ALKASEM/AFP via Getty Images

ALEPPO — The Afrin Liberation Forces, a group of Kurdish fighters from Afrin also known as Hezen Rizgariya Efrine (HRE), recently stepped up their attacks against the Free Syrian Army (FSA) and the Turkish army in the countryside of Aleppo. The attacks suggest HRE is a well-trained and organized group.

On April 8, news outlets with connections to the group circulated a video showing the group attacking a group of Turkish soldiers in Afrin a day earlier.

On the same day, the Afrin Post news site published a statement by the group about its operations against the FSA and the Turkish army in the Aleppo countryside between March 19 and April 7. “On April 7, HRE launched an operation targeting a group of Turkish soldiers in the village of Gobele in the Afrin countryside, killing four soldiers and wounding five others,” it read.

On April 7, the Turkish Ministry of Defense tweeted, “An attack carried out by the Kurdistan Workers Party (PKK)/People's Protection Units (YPG) terrorist group in the Olive branch area resulted in the death of two soldiers,” who it identified as Ahmet Akdal and Gokhan Cakir. According to the ministry, the Turkish forces responded with shelling and killed a number of fighters.

Al-Shahba canton, where the original residents are outnumbered by Syrians displaced from Afrin after it fell in the hands of the Turkish army and the FSA in 2018, now find itself besieged. The canton is surrounded by checkpoints controlled by the Syrian army’s Fourth Division and HRE and the residents cannot leave.

HRE considers itself a resistance movement against the Turkish army and the Turkish-backed FSA in the countryside of Aleppo. The group does not explicitly acknowledge any affiliation with the YPG or the Syrian Democratic Forces (SDF). Some sources say it coordinates with the regime forces.

These mysterious affiliations raise many questions about HRE’s military capabilities, sources of weapons and training and the objective behind its continuous operations against the opposition and Turkish forces in a region isolated from northeastern Syria, the YPG stronghold.

An official in Al-Shahba canton told Al-Monitor on condition of anonymity, “The military operations carried out by HRE against the FSA and Turkish army in the countryside of Aleppo are a response to the opposition’s bombing of Al-Shahba canton. These operations are part of the continuous endeavors to regain control of the Afrin region. HRE now includes more than 2,000 fighters, most of them from the Afrin region.”

Ahmed al-Barho, an Afrin-based activist covering developments in the Afrin and Aleppo countryside, told Al-Monitor, “HRE is just a shield that the YPG is hiding behind. The fighters of this militia are well trained and [armed]. The YPG supplies them with weapons from northeastern Syria.”

Barho added, “Al-Shahba canton, home to tens of thousands of displaced from Afrin, is a fertile ground for recruiting fighters with attractive salaries secured by the YPG leadership in northeastern Syria.”

Al-Farook Abu Bakr, the deputy leader of the FSA-affiliated Al-Motassem Brigade, told Al-Monitor, “Keeping the area in a state of constant tension is one of the key objectives of the operations carried out by HRE. It also serves the interest of the Syrian regime forces, who provide training for HRE members in many of their camps, most notably the Military College of Infantry Corps, near the village of Fafin in north Aleppo.”

Abu Bakr added, “We wiretapped calls between members of HRE and the regime forces on the battlefronts during the clashes. The coordination between them is a fact that we verified firsthand.”

Al-Monitor was unable to reach HRE officials for comment. The exact number of its members, its organizational and administrative structure and its leadership remain unknown. No information is available about its weaponry, who is providing it with training and its coordination with the government forces.

A civil activist from Fafin, which is controlled by HRE, told Al-Monitor on condition of anonymity for security reasons, “HRE receives most of its funding from the YPG leadership. These funds are allocated to finance military operations against the opposition and the Turkish army in the area. HRE members are highly paid to encourage young men and women to join its ranks.”

The YPG provides residents of Al-Shahba canton with support and assistance to entice them to stay in the area and allow their children to join the HRE.

The YPG also continuously organizes events, celebrations and motivational activities. It promises its supporters that it will soon recover Afrin from the grip of the opposition and the Turkish army.