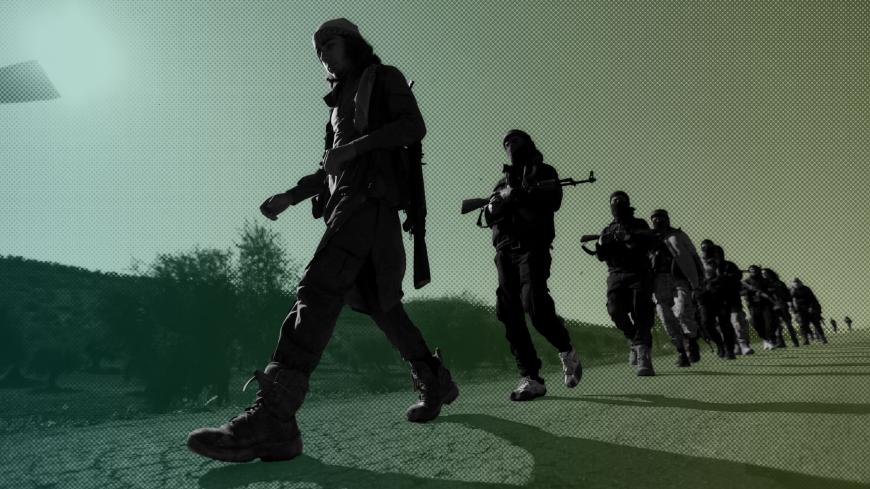 ALEPPO — Opposition factions in the Operation Euphrates Shield area in the Aleppo countryside continue to hold various military training sessions under the supervision of officers from the Turkish army and the so-called Syrian National Army, which is affiliated with the Free Syrian Army (FSA), opposition officials have told Al-Monitor. The program, which began April 7, includes training on airdrop operations using Turkish army helicopters.

This is the first time FSA fighters have received this type of training.

Director of the politburo for the FSA-affiliated Al-Moaatsem Brigade Mustafa Sejari told Al-Monitor, “The trainings of the National Army are ongoing, and preparations for the upcoming battle in the Eastern Euphrates are underway. The trainings are reaching high levels to ensure the success of operations in record time. Undoubtedly, previous experience in the Euphrates Shield and Olive Branch operations will benefit the Eastern Euphrates battles.”

Sejari added, “The trainings are part of the cooperation between the FSA and the Turkish army in their joint war on terror. FSA fighters receive intensive training on airdrops and new military tactics. This is the first such training for FSA fighters. The FSA continues to coordinate and cooperate with the Turkish army, which is offering special trainings and sessions constantly to teach our forces more battle expertise.”

Trainings are held at Turkish military bases in the Aleppo countryside and in training camps affiliated with the factions in the area. FSA-affiliated National Army leaders said the main aim behind the trainings is to raise fighters’ combat readiness to engage in a joint battle with the Turkish army against the Syrian Democratic Forces (SDF) in the Eastern Euphrates.

The SDF is a coalition of Arab and Kurdish fighters, with the Kurdish People’s Protection Units (YPG) being the largest component. Turkey considers the YPG a terrorist group and an extension of the Kurdistan Workers Party, which the Turkish army is fighting inside Turkey.

The training also includes lessons in tactics for storming enemy positions. The 2nd Corps, 2nd Regiment — affiliated with the National Army — launched these training sessions in its camps near al-Bab city on April 15. Before the training began, 18 Syrian officers who defected from the Syrian regime’s army at the beginning of the war joined the ranks of the 2nd Regiment to participate in the trainings by sharing their military and training expertise.

The Ahrar al-Sharqia faction affiliated with the FSA is holding training sessions on machine guns, mortars, urban warfare and close distance martial arts, in addition to giving lessons about the geographic nature of the Eastern Euphrates and the tactics that should be followed in a battle against the SDF. The training of Ahrar al-Sharqia began April 15 as part of the opposition’s efforts to prepare for a possible battle in the Eastern Euphrates, as per the Turkish Anadolu Agency. A military group graduated from the FSA-affiliated Al-Sultan Murad Division in Afrin on April 12.

Turkish President Recep Tayyip Erdogan had declared on Dec. 12, 2018, a military operation in the Eastern Euphrates against the YPG. But the surprising announcement of US President Donald Trump Dec. 19 to withdraw US troops from the northeastern Euphrates delayed the operation.

On March 30, Turkish Defense Minister Hulusi Akar opened a joint operations room near the Syrian-Turkish border in Gaziantep to plan and implement military operations in the Eastern Euphrates.

Official spokesperson for the National Army Yusuf Hamoud told Al-Monitor, “The FSA has benefited a lot from direct contact with the Turkish army and acquired wide-scale technical and military expertise during the two joint battles — Operation Olive Branch and Operation Euphrates Shield. The FSA also benefited from the training offered by officers and experts in the Turkish army to the FSA fighters, including training on several military disciplines like airdrop and landing operations.”

Hamoud added, “If our battle against the SDF in the Eastern Euphrates is launched, it will be a wide-scale one and will require various military tactics. The airdrop and landing operations supply the battlefield with fighters within enemy lines and transfer equipment and ammunition to deep frontlines that can only be accessed through helicopters.”

Ali Tamii — a member of the Kurdish Future Movement, which is active in SDF-controlled areas — undermined the importance of the FSA trainings before engaging in the upcoming battle in the Eastern Euphrates. He told Al-Monitor, “The trainings of the Turkish army for FSA factions aim to pressure the SDF, and they are not as important as a US-Turkish consensus for entry into the Eastern Euphrates. Without such consensus, there won’t be a wide-scale confrontation.”

Tamii pointed to ongoing talks between Turkey and the United States over the fate of the Eastern Euphrates area, saying Ankara will only launch a battle against the SDF if it gets the green light from Washington. In such case, the SDF would be abandoned by the United States — its main backer — and would be forced to retreat, Tamii explained.

On the topic of whether the SDF will insist on waging a battle against the Turkish army and the FSA despite a US-Turkish consensus on Turkey’s entry into the Eastern Euphrates region, Tamii said “the SDF could not wage such battle without their US and European allies. They will be left alone if a Turkish-Western consensus on the region is reached. The SDF might wage limited battles and resistance acts, but only for a short period. The Afrin experience proved that defense is a lost bet because the two sides [Turkey and the SDF] do not have equal powers.”

He said Turkey got US approval to launch Operation Olive Branch in 2018 against the YPG in Afrin, and thus the United States had abandoned their ally — which is why they lost the battle.