Free Syrian Army factions have already started to send fighters to the Syrian-Turkish border in support of Turkey's expected operation against Syrian Kurdish forces there. 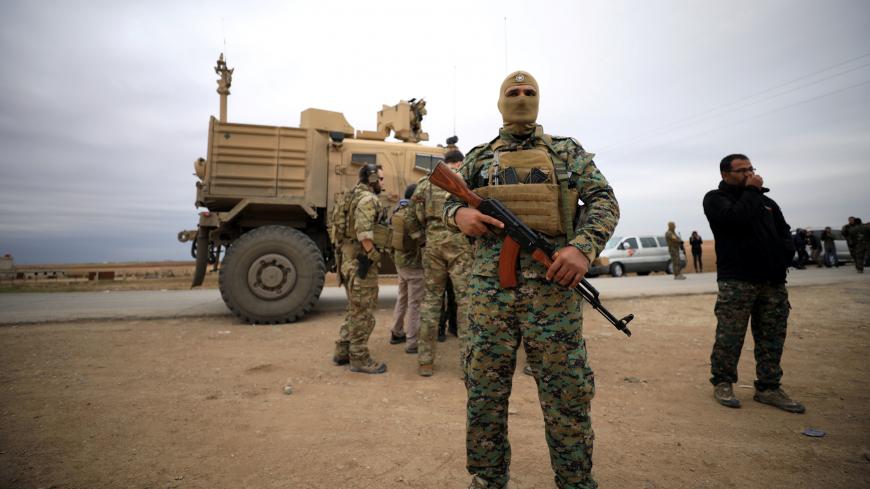 Syrian Democratic Forces and US troops are seen during a patrol near Turkish border, Hasakah, Syria, Nov. 4, 2018. - REUTERS/Rodi Said

ALEPPO, Syria — While Turkish President Recep Tayyip Erdogan announced from the central province of Konya Dec. 17 that his country was determined to launch a military operation against the Syrian Democratic Forces (SDF) east of the Euphrates River, factions affiliated with the Free Syrian Army (FSA) started to send fighters to the Syrian-Turkish border.

“We can start our operation against terrorists at any moment now,” he said, adding, “We have received a positive response from US President Donald Trump regarding the military operation we announced last week east of the Euphrates.”

On Dec. 14, FSA factions gave the Turkish army the names of fighters willing to take part in the military operation. They will be transferred from the Euphrates Shield area in the countryside of Aleppo to southern Turkey along the border with Syria. The FSA-affiliated National Army in the Euphrates Shield area has also said that all of its factions would be sending members to take part in the military operation.

One FSA commander told Al-Monitor on condition of anonymity, “The FSA factions sent more than 2,000 fighters into Turkey on Nov. 20 for military training. These were stationed along the Turkish-Syrian border. On Dec. 15, the Turkish army asked the FSA factions to send more fighters to the border area south of Turkey. Consequently, more than 2,000 fighters will be sent to the border, and this will bring the total number of fighters to 4,000.”

He went on, “Some FSA factions will refrain from sending large numbers of fighters to the border because many fighters do not want to take part in distant battles whose results could go either way. Those participating in the operation are mainly FSA fighters from Deir ez-Zor and Raqqa residing in the Euphrates Shield area. They are widely interested in the operation because they want to return to their hometowns that fall under the control of the SDF.”

The National Army announced in a Dec. 16 statement that it is determined to fight what it dubbed the liberation battle alongside the Turkish army.

According to another FSA source, Turkey said that while the battle will initially target SDF positions in the city of Tell Abyad from Turkish territory, it will subsequently move to target the city of Ain al-Arab, Kobani and the city of Ras al-Ain. Subsequently, the source said, the SDF in the western parts of Kobani will be attacked from Jarablus in the areas east of the Euphrates River.

The source added that the Turkish army has given FSA commanders a detailed explanation of the size of its fortifications east of the Euphrates as well as a map of the land mines that they scattered, telling them the SDF might resort to violent resistance.

As soon as Erdogan first said on Dec. 12 that a military operation was imminent, the Euphrates Shield area witnessed three bombings. A car bomb exploded that day in the center of the city of Azaz, killing a 10-year-old girl and wounding a large number of civilians. A motorcycle exploded in the market of al-Rai city, wounding several civilians, and another blew up in the market of al-Bab, killing one civilian and injuring several others.

While no figures are yet available on the wounded, the bombings sparked fear among residents that other cities and towns would be targeted as the military operation draws near.

In a bid to restore security, the FSA's military police in the Euphrates Shield area announced Dec. 12 that all of its forces were put on high alert.

Youssef Hammoud, the official spokesman for the National Army, told Al-Monitor, “The bombings that took place in Azaz, al-Bab and al-Rai are a direct message from the SDF to the FSA. The SDF are behind those explosions that came right after the Turkish president’s declaration that the military operation was drawing near. We in the FSA will do our best to ensure the success of the military operation launched by the Turkish army against the SDF. The SDF explosions will not scare us.”

He explained that some "14,000 FSA fighters are willing to participate in the military operation" adding, "If the operation requires more fighters, then we are all for sending more fighters until their number reaches 20,000.”

Hammoud concluded, “The FSA will spearhead the battles against the SDF and will be supported by the infantry forces and fire cover of the Turkish army.”

Mustafa Sejari, the head of Al-Moaatsem Brigade's political bureau, told Al-Monitor that the FSA was hoping that peaceful and logical solutions would be found to pave the way for the return of hundreds of thousands of people to the eastern Euphrates Shield area following their displacement by the SDF.

According to Sejari, hundreds of thousands of people from the eastern Euphrates Shield area currently live in Turkey and FSA-controlled towns in the Euphrates Shield area and cannot return to their towns. While some of them were displaced when the Islamic State organization gained control of those towns, others left after the SDF took over. People are afraid to return because they fear the SDF will recruit their children, Sejari added.

He went on to say that the SDF is behind the explosions that rocked FSA-controlled areas. The latest targeted the center of the city of Afrin Dec. 16, when a car bomb exploded in the city market, killing eight civilians and wounding 22 others.

“We have no other option but to launch a military operation against the SDF. These groups are working on beefing up their military presence and have separatist intentions. They want to divide Syria. This is something that the FSA will not allow,” he said.

The expected Turkish military operation has considerable support from residents of the Euphrates Shield area in the Aleppo countryside. Many of them believe that the SDF is no less dangerous than the regime and fear that the SDF will pursue its separatist intentions and set up self-administration in areas under their control.

Both the Turkish statements and the FSA deployment along the border seem to be pushing the United States toward giving consent to the operation, which could start now or in early 2019.