Turkish military reinforcements pour into the frontlines with the Kurdish forces in northeastern Syria, as Turkish-backed FSA factions stand on alert ahead of an imminent battle. 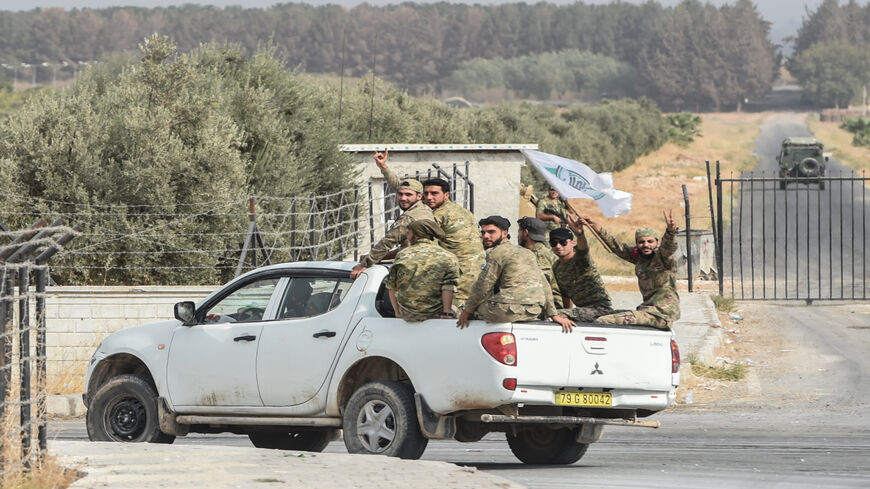 Members of the Turkish-backed Free Syrian Army wave on top of a vehicle as they drive back to their base camp, Akcakale, Turkey, Oct. 16, 2019. - Burak Kara/Getty Images

ALEPPO, Syria — The Turkish army continues to send military reinforcements to the areas controlled by the Syrian opposition in northeastern Syria, amid ongoing Turkish threats against Kurdish forces in the area.

Meanwhile, the Turkish-backed Free Syrian Army (FSA) factions are on alert, and meetings are being held between FSA and Turkish army leaders to coordinate the possible military operation they might launch against the Kurdish forces.

The Turkish Turkiye Gazetesi newspaper reported Oct. 25 that several leaders of the FSA-affiliated Syrian National Army who had participated in past Turkish military operations in Syria (Operation Euphrates Shield, Operation Peace Spring and Operation Olive Branch) were summoned to Ankara to prepare for a military operation in northeast Syria. According to the paper, the operation will take place on two main axes with the participation of around 35,000 fighters.

It said that trained FSA soldiers will be deployed across critical areas during the operation, which will take place in the areas held by the Kurdistan Workers Party (PKK) and the People’s Protection Units (YPG), such as Tell Rifaat, Manbij, Ain Issa and Tel Tamr, and they will be backed by Turkish commandos who served in Iraq and Syria.

The newspaper pointed out that Turkey is closely monitoring the moves of the PKK and its supporters by air and land before the operation. Ankara also identified tunnels, logistic centers, transport points, camps and communications systems that were dug at the PKK’s headquarters in Tell Rifaat and its surroundings, as well as in Manbij, Ain Issa and Tel Tamr.

An FSA commander told Al-Monitor on condition of anonymity, “The intensive meetings between FSA leaders and Turkish military officials are indeed happening periodically to prepare for the battle against the Syrian Democratic Forces [SDF], which is led by the YPG. However, these meetings did not take place in the Turkish capital Ankara or inside Turkish territories, but rather in the FSA-controlled areas in northern Syria, specifically in the Euphrates Shield and Peace Spring areas.”

He said, “The FSA factions have raised the readiness of their military battalions, and they have sent more military reinforcements to the contact lines with the SDF in the north of Raqqa governorate and the axes near the town of Tel Tamr in the countryside of Hasakah governorate. Military convoys affiliated with the Turkish army also entered the area, including tanks, rocket launchers and various weapons.”

The military commander added, “The joint military moves between the FSA factions and the Turkish army are not limited to the Peace Spring area, east of the Euphrates, but also include areas west of the Euphrates in the countryside of Aleppo, in northwest Syria. The talks between the FSA leaders and Turkish military officials revolve around the military readiness, coordination in the field and the tactics that are supposed to be followed.”

On Oct. 28, the Syrian Liberation Front (SLF) affiliated with the FSA announced the graduation of a new batch of fighters who underwent military training as part of the military preparations and training for the upcoming battle.

Mustafa Sejari, director of the SLF’s political bureau, told Al-Monitor, “We have completed the training and military preparations necessary for the upcoming military operation, and thousands of fighters are ready to resume military operations against the PKK and its terrorist arms in Syria.”

He added, “The joint military operations between the FSA and the Turkish army will achieve the ultimate Syrian interest in protecting the Syrian people and the Syrian territorial integrity in the face of cross-border terrorist organizations. Our forces are patriotic and act according to the interest of the Syrian revolution, and our previous operations were successful and achieved the desired interests.”

Turkish Defense Minister Hulusi Akar said in an Oct. 14 speech at the National Defense University in Istanbul that his country “is ready to take the necessary measures to protect and preserve its rights and interests at the right time and place, under the leadership of President Recep Tayyip Erdogan.”

Meanwhile, the Turkish parliament approved Oct. 26 a motion extending Erdogan’s mandate to send Turkish troops to Syria and Iraq for another two years.

Mohammed al-Sukari, a researcher on Syrian affairs at the Istanbul-based Jusoor Center for Studies, told Al-Monitor, “It is clear that the Turkish military operation is imminent, and this can be monitored through the recent political and field developments, especially the large flow of Turkish military reinforcements toward the areas of northern Syria.”

He said, “Preparations are underway between Turkey and the FSA factions through the joint operations room, and the meetings between the two parties are ongoing.”

Sukari added, “I believe that Turkey can launch an operation on the Kobani axis, with Russia’s consent. I think it is difficult for Ankara to launch a military attack on Ain Issa, the administrative capital of the [Kurdish-led] autonomous administration.”

FSA commander Capt. Abdel Salam Abdel Razzaq told Al-Monitor, “The areas of Tell Rifaat and Kobani constitute a strategic target for the FSA and Turkey, and it is likely that the battle will be directed toward them.”