Turkey has threatened to launch a military operation against the SDF in the wake of attacks carried out by the latter in north Syria. 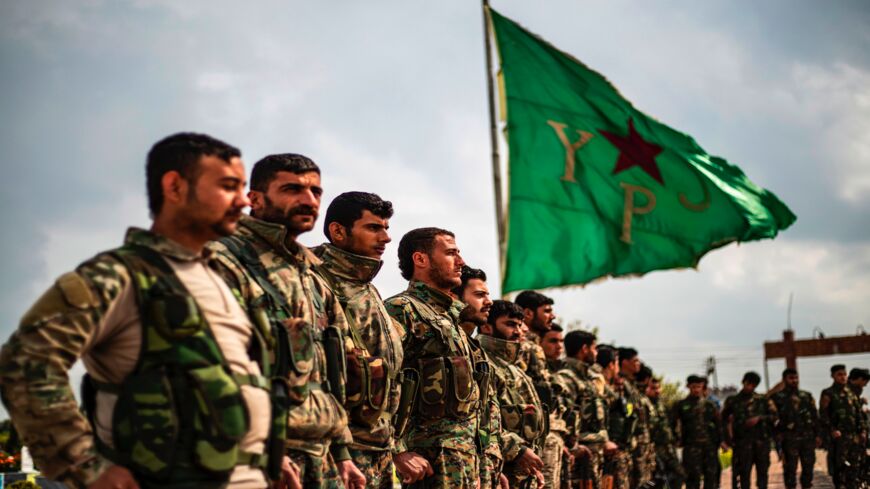 Members of the Kurdish-led Syrian Democratic Forces (SDF) attend the funeral of an Arab fighter in SDF who was killed the previous week in the eastern Deir ez-Zor province, in northeastern Syrian Kurdish-majority city of Qamishli on April 10, 2019. - DELIL SOULEIMAN/AFP via Getty Images

Turkey has threatened to launch a military operation against the Kurdish-led Syrian Democratic Forces (SDF), which has recently stepped up its attacks in the areas controlled by the Turkish-backed factions in north Syria.

On Oct. 7, a rocket attack targeted a Turkish military convoy in the area, killing a Turkish soldier.

The Turkish government announced Oct. 10 that two of its soldiers were killed in a similar attack near Marea in the countryside of Aleppo.

In a Cabinet meeting on Oct. 11, Turkish President Recep Tayyip Erdogan said the latest attack that targeted Turkish forces in northern Syria was “the final straw” and the attacks against these areas are unacceptable.

He stressed that Ankara would eliminate threats originating from northern Syria either by itself or with the support of active forces there.

Meanwhile, Turkish Foreign Minister Mevlut Cavusoglu said at a press conference in Ankara on Oct. 13 that Russia and the United States bear responsibility for the attacks that recently targeted Turkish forces in Syria.

Turkish Defense Minister Hulusi Akar said during the opening ceremony of the National Defense University for the 2021-2022 academic year on Oct. 14 that his country will take the necessary measures to protect and preserve its rights and interests in the appropriate place and time.

Meanwhile, the village of Qarqamish in the Turkish state of Gaziantep was targeted with mortar shells on Oct. 12, with Turkish authorities accusing the SDF of being behind the attack.

On Oct. 13, the Turkish army renewed its shelling of SDF sites in the eastern Euphrates region and the northern countryside of Aleppo. Turkish reconnaissance aircraft and drones hovered over many areas.

In this context, Yussuf Khaled Hammoud, official spokesman for the Syrian National Army affiliated with the Turkish-backed Free Syrian Army, spoke to Al-Monitor about the ongoing preparations for a new battle against the SDF in response to the almost daily bombing of the Syrian National Army’s areas of control, which caused the deaths of civilians and soldiers.

“The opposition factions are fully prepared for any upcoming military action, and we have the capabilities to achieve a new victory, especially considering that this battle will take place with the participation of Turkish forces, as was the case with operations Euphrates Shield, Olive Branch and Peace Spring. An operations room has been established for an organized military command in a bid to increase the ability to respond to any military development. Everyone knows that the SDF will not be able to confront our forces if Russia and the US abandon them,” he said.

On Oct. 15, Reuters quoted Turkish officials as saying that Recep Tayyip Erdogan will discuss launching a new military operation against the SDF with his US counterpart, Joe Biden, during their meeting at the G-20 summit, which will be held at the end of this month.

Another Turkish official was quoted as saying that Russia controls the areas from which the recent attacks against Turkish forces and territory originated, which will prompt Erdogan to hold talks with Russian President Vladimir Putin as well.

In case diplomacy fails, the official said, an operation against the People's Protection Units (YPG) in north Syria seems “unavoidable.”

For his part, Wael Olwan, a researcher at the Istanbul-based Jusoor Center for Studies, told Al-Monitor, “The Turkish statements reflect Turkey’s seriousness in ending any provocations on its southern borders, and this raises the odds of a military solution. But field and political signs indicate that Turkey is waiting for Russia and the US to run out of options when it comes to putting an end to these threats. Only then would Turkey move [into the region] in cooperation with regional and international parties, even if limited.”

He added, “What’s more, military action is not the only option for Turkey to secure the areas it controls [in Syria through the Syrian opposition factions]. Russia might propose solutions that Turkey may accept, as happened in Afrin when Turkish forces entered the town after the Russians [withdrew] and abandoned the SDF.”

Olwan continued, “Also, since the concerned parties seem to want to avoid clashes, they will likely resort to compromises, which may include the exchange of some geographical areas. This means Turkey may abandon parts of Idlib in return for being allowed to advance into areas controlled by the SDF.”

“But in the event of a military attack, Turkey will take part alongside the Syrian national army, since Ankara is not ready to deploy more forces on the ground to avoid casualties in its ranks and opposition from the Turkish public,” he added.

Amidst the Turkish statements about a possible military operation in northeastern Syria, the SDF fear their allies will abandon them, just as happened during previous Turkish operations against them.

Sihanouk Depod, a member of the Presidential Council of the Syrian Democratic Council, the SDF’s political wing, said in a press statement on Oct. 16 that they can expect anything from Turkey.

Riad Darar, co-chair of the Syrian Democratic Council, had said in statements that reports about the recent attacks targeting Turkish areas of control and Turkish soldiers is “a Turkish game to gain positions. Turkey will not dare control new areas in Syria.”

This comes as the SDF sent logistic reinforcements and deployed dozens of fighters to its positions in the countryside of Raqqa and Hasakah in the wake of Turkish threats to launch a military campaign.

Fayez al-Asmar, a military analyst and strategic expert, told Al-Monitor, “Turkey used the attacks on its forces as an opportunity to threaten with military action against the SDF-controlled areas, especially considering that there are previous agreements that allow it to penetrate more than 30 kilometers to confront any kind of terrorism that uses Syrian territory against it.”

He added, “Although Turkey has been redeploying its forces and sending reinforcements in the area, Ankara has not specified a date for the new military operation, nor did it reveal the targeted areas. There are three areas that could serve as Turkey’s next target: the area between Ras al-Ain to Qamishli, or Tell Rifaat and its environs, or Ain al-Arab and Manbij. But the priority seems to be the city of Tell Rifaat, north of Aleppo, [from where] attacks have been carried out against Afrin and the Euphrates Shield areas. This area is completely under the control of Russia, and the latter will not accept the entry of Turkish forces because of its strategic location near Aleppo.”