The timing and extent of the anticipated operation against Syrian Kurdish forces are still uncertain and will likely depend on Ankara’s weighing of tradeoffs with Washington and Moscow. 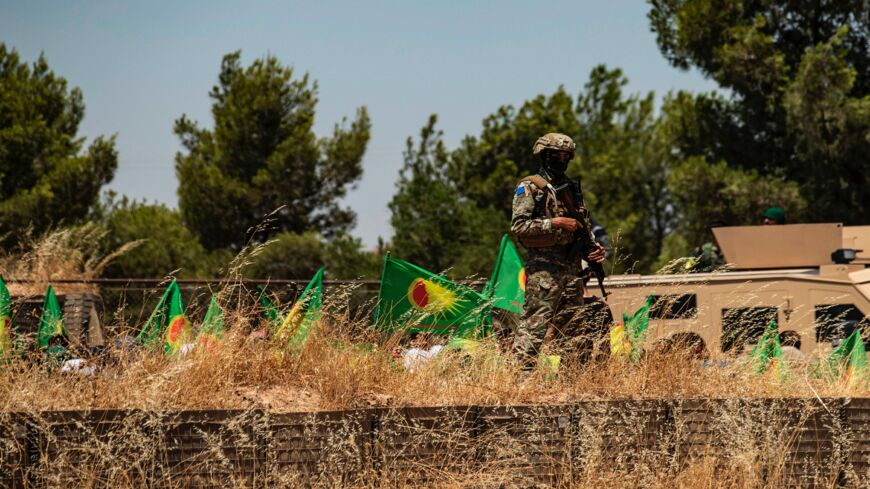 A member of security of the Syrian Democratic Forces (SDF) stands guard in the countryside of the Hasakah province, on June 27, 2020. - DELIL SOULEIMAN/AFP via Getty Images

IDLIB — Following a spate of rocket attacks in areas of northern Syria under the control of Turkish-backed groups, Ankara is telling its Syrian opposition allies to prepare for a military operation against the Syrian Democratic Forces (SDF), the Kurdish-led group Turkey says is behind the strikes.

On Oct. 11, just a day after a missile attack on a Turkish military patrol killed two Turkish soldiers near the town of Marea, Turkish President Recep Tayyip Erdogan said at a Cabinet meeting his country is “fed up” with these attacks and “determined to eliminate the threats originating” from northern Syria.

The sentiment was echoed days later by Foreign Minister Mevlut Cavusolgu, who called out Russia and the United States for what he claimed was their failure to implement agreements to withdraw Kurdish forces from the Turkish-Syrian border. “Since Russia and the US failed to honor their commitments, we must rely on ourselves and do what should be done,” the top diplomat said at an Oct. 13 press conference.

On Oct. 15, Reuters cited two Turkish officials as saying Ankara is ready for the possibility of launching new military action against Kurdish fighters in the event of the failure in talks Erdogan plans to hold with his US and Russian counterparts on the sidelines of the G20 summit in Italy at the end of October.

In this context, a field commander in the Syrian National Army (SNA), affiliated with the Turkish-backed Free Syrian Army (FSA), told Al-Monitor on condition of anonymity, “More than a week ago, Ankara sent us instructions to increase our military readiness. As military formations, we prepared military vehicles and inspected weapons. But Ankara has yet to determine the timing and location of the operation, while it asked Syrian National Army leaders to meet in Ankara soon to discuss the matter.”

He added, “The city of Tell Rifaat is under the control of the Kurdish-led Syrian Democratic Forces (SDF), and it is the source of the bombing targeting the Turkish forces and civilians in the city of Afrin and its countryside. The next Turkish operation will possibly be [in] Tell Rifaat, but it is not that simple given the presence of the regime forces there as well the presence of Russian forces in Menagh near Tell Rifaat. Turkey could also start a battle in the city of Ayn al-Arab (Kobani) in the northeastern countryside of Aleppo.”

Salih Muslim, chairman of the Democratic Union Party (PYD), said in press statements to the Kurdish Hawar news agency on Oct. 18 that any Turkish military operation in northeastern Syria will be met with violent resistance. He accused Turkey of hindering a solution in Syria.

"Turkey wants to eliminate the Kurds and all components in the region by deploying its affiliated factions across the region,” Muslim said.

Muslim also claimed the SDF never attacked the Turkish border as part of their commitment to the agreement reached between Russia and Turkey in October 2019, which requires YPG forces to withdraw 30 kilometers (19 miles) from the Turkish border.

Muhammed al-Sukkeri, a researcher at the Jusoor Center for Studies who lives in Turkey, told Al-Monitor, “It is very likely that Turkey will launch a military operation [in north Syria] in light of the increasing SDF threats to target the depth of Turkish areas. Turkey may launch military action in six areas [in north Syria]. Some of these areas, however, are controlled by Russia and thus may be subject to negotiations.”

“But I believe that Turkey will not give up Manbij, Tell Rifaat and Ain al-Issa, given their strategic importance. [The YPG] losing control of these areas will deal a major blow to Russia. Russia and Turkey may reach an agreement on the areas west of the Euphrates, namely Ain al-Arab,” he added.

Sukkeri said, “Any military operation requires a bilateral agreement between Moscow and Ankara. Such a consensus requires some sort of Turkish concession, such as removing the opposition factions from the south of the M4 highway connecting Aleppo and Latakia. However, it would be difficult for Turkey to give up on the key highway.”

He continued, “In the event of such a consensus, it would be unlikely for Washington to oppose it knowing that it is currently not interested in the Syrian file unless the Russian-Turkish understandings come to include areas under US influence such as al-Darbasiyah and al-Malikiyah.”

Sukkeri indicated that “it is unlikely that Turkey will launch a military operation without reaching a diplomatic and political agreement [with the players on the ground]. But it remains a possibility, and if it happens, such an operation will largely affect Turkey and the popularity of the ruling Justice and Development Party (AKP) ahead of the Turkish general elections next year. Yet still, the AKP believes that such an operation will do it more good than bad, which explains the repeated threats of launching military action in Syria.”