Syrian government forces have deployed in north Syria in anticipation of a Turkish military operation. 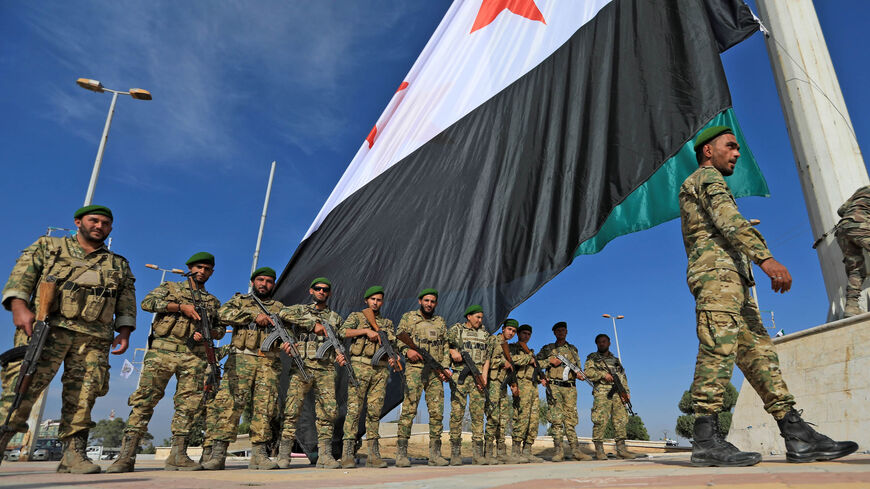 Syria’s state news agency SANA reported July 18 that the Syrian government has deployed heavy reinforcements to the cities of Ain Issa in the north of Raqqa province, and Manbij and Ain al-Arab (Kobani) in the east of Aleppo province.

The news site said that new military reinforcements have recently arrived on the outskirts of Manbij as part of a plan to close all fighting fronts to confront any “aggression” against Tal Rifaat and Manbij.

Meanwhile, the Syrian Observatory for Human Rights reported July 16 that the Syrian government forces boosted their presence in the areas under the control of the Kurdish forces, including in Ain Issa.

Media sources based inside the areas held by the Kurdish-led Syrian Democratic Forces (SDF) in northern Syria told Al-Monitor that the Syrian government has largely deployed in Tell Abyad in the north of Raqqa, and in Ain al-Arab and Manbij in the eastern countryside of Aleppo.

According to the sources, these deployments include dozens of military and armored vehicles, including tanks, and heavy artillery, as well as more than 400 Syrian troops.

“The regime forces set up military checkpoints on the demarcation lines with the [Turkish-backed] Syrian National Army. The regime is present in Manbij city and Kobani. Officers from the regime forces and the Kurdish forces are holding regular meetings to discuss military coordination and defense plans in case Turkey and its allies launched a military operation on the areas of Kobani, Manbij and Ain Issa,” one of the media sources told Al-Monitor on condition of anonymity.

He said, “The regime forces — backed by the Russian forces — set up cement blocks in Zaibat village and on the outskirts of Bozekeeg village, north of Manbij. The SDF also raised the regime’s flags over military buildings in Manbij city.”

The sources confirmed that discussions between the SDF and the Syrian government forces are underway to establish a joint operations command room headquartered in Manbij city, northeast of Aleppo.

A Kurdish leader told Al-Monitor on condition of anonymity, “We agreed with the Syrian regime about the deployment of its forces in several areas under our control. It will send more forces in the coming days, some of which are now stationed at several military posts in the countryside of Raqqa and Aleppo. There is an understanding with the Syrian regime on several points, through Russia, although some points are still pending about the autonomous administration. Our military coordination with the regime is expected to develop.”

On July 8, Aldar Khalil, member of the co-chairmanship of the Democratic Union Party (PYD), which shares power in the Kurdish-led Autonomous Administration in North and East Syria, told the London-based Saudi Asharq al-Awsat newspaper, “The Damascus government has not yet taken a decision to give up the centralized government [at the expense of the autonomous administration in north Syria] because it fears this would lead to its fall. Also, [Syria] has multiple identities that do not belong to a single component. We all agree that there is an imminent threat currently to the sovereignty and identity of the Syrian state as a whole.”

He said, “If the Damascus government seeks to resolve the crisis [in northeastern Syria], discussions and consultations are not enough. Although the latter consists of a basic condition, the most important thing today is to stop the Turkish aggression and end its occupation of Syrian territory.”

Zain al-Abeedeen al-Aqidi, a journalist based in northeastern Syria, told Al-Monitor, “The regime has an undeclared goal behind its deployment in the SDF-held areas. It wants to penetrate them and gain more influence there.”

He said, “I don't think that the decision to launch a Turkish military action is easy or in the hands of Turkey. It requires a consensus among international actors, namely the Russians, Americans and Iranians. For the moment, they are all against it. However, the Turkish threats will not stop in the future unless the last Kurdish armed man is pushed away from Turkey’s southern border. It is a complicated situation, because the Russians and Iranians accompany the [Bashar al-] Assad army in northeastern Syria. The Turks are well aware of that.”

Aqidi noted, “The issue will be resolved diplomatically, and there will be no Turkish move without a US-Russian green light. The Russians deployed large efforts to bring Assad and the SDF closer. The deployment of the regime forces is the product of the Russians’ work.”

He added, “The SDF were very confused lately as the Turkish threats of a military operation against them escalated. As always, with every Turkish threat and pressure against the SDF, the Assad regime and the Russians exploit the situation to increase their influence in the SDF-held areas. We are seeing very large units of the Assad forces deployed in Raqqa. Coordination between the SDF and Assad forces has reached unprecedented levels. Members of [Iran’s Islamic] Revolutionary Guard Corps reached areas it could not have imagined to reach, and that is thanks to the cooperation between Assad and the SDF, which in turn is due to the Russians. The Russians held numerous meetings with the SDF, PYD and PKK leaders that paved the way for this.”

Wael Alwan, a Turkey-based researcher at the Jusoor Center for Studies, told Al-Monitor, “The regime is exploiting the SDF’s weakness in light of the Turkish threats and mobilization. The regime wants, through Russia, to obtain concessions from the SDF, such as being allowed entry into their areas, in addition to obtaining oil from the SDF. The regime’s military presence will not prevent the Turkish military operation from happening. When this operation begins, the regime forces will [most probably] withdraw from the SDF areas, after a Russian-Turkish understanding, and there will not be a military confrontation between the Syrian regime and the Turkish army. A wide-scale confrontation between the regime and Turkey is unlikely to happen. The [potential] understandings between Turkey and Russia will determine the shape of the map in northeastern Syria.”

He added, “Perhaps the military solution will not be the only solution, as the expected Russian-Turkish understandings may delay the military option, and remove the SDF and replace them with the regime forces.”

Muhammad al-Sukari, researcher on Syrian affairs based in Turkey, told Al-Monitor, “There is no agreement between Russia and Iran on the one hand and Turkey on the other, because Turkey has not been able to obtain the consent of the Americans, Russians and Iranians to launch its military operation in northeast Syria against the Kurdish forces. Iran joined the scene and deployed forces in Tal Rifaat. There are renewed alliances between the SDF and Iran, all aiming to prevent Turkey from launching its operation.”

Sukari added, “Yet it seems that Turkey insists on launching the operation, which may happen without the approval of Russia and Iran. Turkey is trying to reach an understanding with Iran, and the upcoming tripartite meeting that will be held in a few days between Russia, Turkey and Iran will determine the future of the Turkish military operation.”