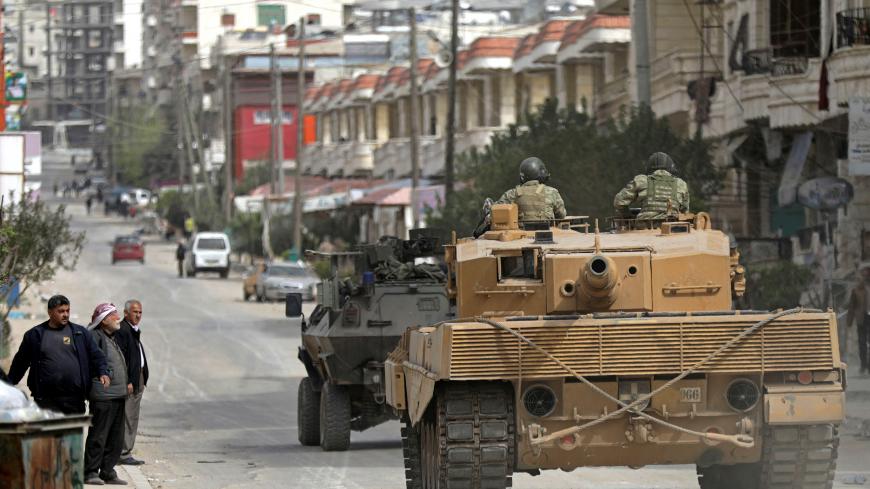 Ever since the Turkish military and allied factions from the Free Syrian Army drove the Syrian Kurdish People’s Protection Units (YPG) out of Kurdish-dominated Afrin in March 2017, there has been almost no independent reporting on how the enclave is faring under Turkish occupation. The United Nations and Human Rights Watch are among a handful of international bodies that have offered valuable insight on the massive human rights abuses — rape, theft, extortion, kidnappings and the forced displacement of locals in favor of Syrian Arabs bused in from areas retaken by the Syrian Arab Army — allegedly inflicted by the FSA under Turkey’s watch. The UN said some of these actions amount to war crimes. But aside from propaganda being churned out from opposing sides, even less is known about a low intensity insurgency that is being waged by several Kurdish armed groups against the FSA and Turkish forces inside Afrin.

Using satellite imagery and open sources, the online investigative media outlet Bellingcat has sought to lift the veil on the 10-month insurgency in a report that was published on March 1. The study focuses on the attacks claimed by three anti-FSA groups. They are the YPG, Ghadab al-Zaitoun (Wrath of Olives) and Hezen Rizgariya Efrine (Afrin Liberation Forces). Together they have claimed responsibility for almost 220 attacks carried out between late March 2018 and the end of January 2019.

Alexander McKeever, a master's student at New York’s City University who gathered and analyzed the data, told Al-Monitor that the the groups had claimed 25 more attacks in February. He was able to independently verify half of them. Amid the forest of technical details, three aspects of the insurgency stand out: The actors, their methods and the impact of their attacks, all of which have wide ramifications for the broader conflict between Turkey and the YPG as well as their respective relations with the other main stakeholders in the eight-year-old Syrian conflict: Russia, Iran, the regime and the United States.

The YPG is widely lauded for its steely courage in the US-led coalition’s battle against the Islamic State. Its men and women fighters have with their Arab allies in the Syrian Democratic Forces brought the caliphate to its knees and shrunk its once vast territory to the hamlet of Baghouz, where the final assault against the jihadists is currently unfolding. But in Afrin, Bellingcat suggests, Syrian Kurdish forces may be displaying a darker side they are presumably less keen to advertise.

Wrath of Olives, McKeever observes, “gained notoriety for the their highly controversial kidnappings and executions of FSA members and suspected collaborators, a grim hallmark that has differentiated them from official YPG activity in Afrin.” The word “official” here is key because, as McKeever noted, there is speculation that both Wrath of Olives and the Afrin Liberation Forces are front groups for the YPG. If true, the tactic mirrors the modus operandi of the Kurdistan Workers Party (PKK), the rebel group that has been fighting Turkish forces since 1984 and helped found, organize and staff the YPG. The PKK is believed to use front groups such as the Kurdistan Freedom Falcons for its urban operations, in which civilians are sometimes targeted. The practice gives the PKK plausible deniability while at the same time forcing the government to back off. Wrath of Olives has published some of its execution videos online. At least two of its victims were allegedly civilians accused of serving as informants for the Turkish military.

The Afrin insurgents typically use IEDs during the day and roadside ambushes with small firearms at night. More recently, however, the Afrin Liberation Front has begun to use anti-tank guided missiles against its Turkish foes.

Mckeever said it's conceivable that the Kurdish rebels are operating with the acquiescence of the Syrian regime, which also have a vested interest in disrupting the Turkish occupation. The situation is so murky in Afrin that it's impossible to confirm, as is the death toll. But at least 10 Turkish soldiers have died since the end of the Turkish offensive. Turkey often ascribes the deaths to de-mining accidents. Bellingcat places the number of opposition rebels killed over the past 10 months at over 100 in what it calls a prudent estimate.

The main reason Turkey was able to launch Operation Olive Branch was that Russia, which controls the skies over Afrin, allowed it to do so over the regime’s objections. Its fall was an enormous blow to Syria’s Kurds, as it is their heartland, said Thomas Schmidinger, a political scientist and cultural anthropologist at the University of Vienna who has authored two recent books on the Syrian Kurds, one of them on Afrin.

Schmidinger told Al-Monitor, “Afrin was much more Kurdish than any other part of Rojava,” he said using the Kurdish name for Syrian Kurdistan. Schmidinger added, “Afrin is considered the most liberal and open-minded region in Rojava and was also a hub for religious minorities like the Yazidis and Alevis. They suffer especially under the Turkish occupation and the semi-jihadist militias who work with the Turkish army.”

Schmidinger alluded to the desecration of Alevi and Yazidi sacred sites and cemeteries, all documented by McKeever in a separate Bellingcat study.

However, Sunni Kurds also suffer under the policies of ethnic cleansing. The internally displaced are prevented from returning while Arab and Turkmen settlers take over their homes. “It seems that Turkey is trying to establish a kind of Turkish Republic of Northern Syria in the region, similar to the Turkish Republic of Northern Cyprus, but with an Islamist agenda,” Schimdinger argued.

The Wrath of Olives label is a pointed reference to Turkey’s alleged appropriation of Afrin’s rich olive harvest, which used to be one of its main sources of income. Its rebel allies stand accused of burning down thousands of olive trees, extorting produce from local farmers at rock bottom prices and dismantling and stealing local olive oil presses.

All of these violations are feeding the Kurds’ desire for vengeance but can the insurgency be enough to drive out Turkish forces and scare off their collaborators? Not likely, contended Fabrice Balanche, an associate professor and research director at the University of Lyon II who closely monitors the Syrian conflict. Balanche reckons that Afrin serves as an example to the YPG of the fate that likely awaits them in places like Kobani and Qamishli, with Turkey invading once the United States withdraws, “which it almost certainly will,” Balanche told Al-Monitor. “It's either that or the Kurds will have to agree to an unconditional return of the regime.”

In any case, Moscow is in no real hurry to see Turkey leave because Afrin gives Russia leverage over Turkey and the regime. It undermines Turkey’s ties with NATO by virtue of being such an irresistible prize that is Russia’s alone to deliver. At the same time it is a constant reminder to the Kurds of how the Americans failed to come to their defense. But the Syrian Democratic Forces seems undeterred, declaring in a statement last month that it would focus on the “liberation of Afrin” once the battle against the Islamic State is over.