Turkey is proposing a diverse governing council for Afrin, but some suspect the idea is really a disguise for Turkish rule. 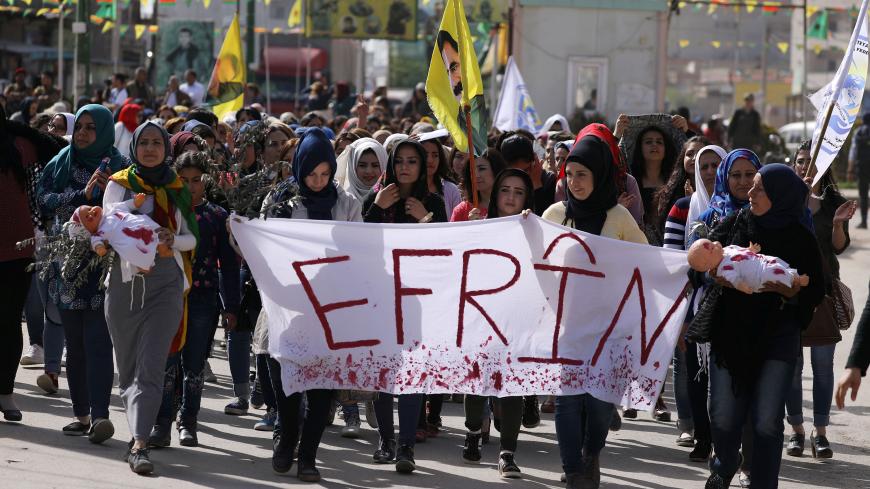 As Turkey works to set up a new system of governance in recently captured Afrin, Syria, it is also rekindling discord among rival Kurdish groups.

Kurds who oppose the Democratic Union Party (PYD) recently met under Ankara’s auspices in Gaziantep, Turkey, to form the Afrin Liberation Congress. This first move toward new rule in Afrin was denounced as a betrayal by other Kurdish parties that have been working for autonomy in northern Syria. Mutual recriminations between the parties are gaining momentum. Anti-PYD Kurds have joined Turkey’s campaign to demonize the PYD, thus contributing to Turkish President Recep Tayyip Erdogan’s narrative: “We will deliver Afrin to its true owners.”

Turkey's news media is enthusiastically playing up the pro-Ankara statements of Kurdish representatives in Gaziantep who want to rule Afrin instead of the PYD and its armed wing, the People's Protection Units (YPG). (The YPG is the Syrian extension of the Kurdistan Workers Party, or PKK, a designated terrorist group in Turkey.)

A prominent name in this pro-Ankara campaign is Abdulaziz Temo, a member of the Kurdish National Council in Syria and president of the Independent Syrian Kurds Association. Temo, in a March 20 statement that made headlines, said, “Just like [the Islamic State] rose from the Arabs, the PYD is rising as the [Islamic State] of the Kurds. They want to establish a new Qandil in Afrin," he said, repeating Erdogan's frequent reference to the PKK's headquarters in the Qandil Mountains of Iraqi Kurdistan.

Also receiving exaggerated media coverage were the words of Kurdish National Council spokesman Abdulbari Osman. “The PYD is the name of cruelty. Cruelty reigns in Afrin,” he said.

The Kurdish National Council was established in 2012 by Massoud Barzani, then-president of the Kurdistan Regional Government (KRG) in Iraq, when he signed an accord in Erbil with the Kurdish Higher Council to become partners in the administration that was set up in Syrian Kurdistan (Rojava). According to the Kurdish National Council, the accord fell through because the PYD was marginalizing the Kurdish National Council and, at the same time, blaming the council for the failure for not sending representatives to the committees to be formed. The council then shifted its allegiance to the Syrian National Coalition. This Barzani-supported flank now has the opportunity to settle accounts in Afrin. Temo said the anti-PYD group's goals and expectations go beyond Afrin: “We want Manbij, Tell Rifaat, Ras al-Ain, Qamishli and Raqqa to be cleansed of the terror outfit. The only power that can do that is Turkey.”

These pro-Barzani Kurdish groups in Syria accuse the PYD of working with the Syrian regime and discarding other opposition groups.

Anti-PYD groups, with their Gaziantep communique, promised that the people of Afrin will have a role in governance — but what is really being hatched is a proxy for Turkish control. Naturally, the PYD wing sees this as an occupation model.

The alternative governing body that will be based in Gaziantep until it can move to Afrin summarized its platform in a declaration saying it will:

A provisional assembly at Gaziantep — made up of 24 Kurds, eight Arabs and one representative each of Alevis, Yazidis and Turkmens — is to implement these goals.

When looked at closely, however, this assembly shapes up quite differently. According to Hasan Shindi, spokesman of the Afrin Liberation Congress, Turkey is going to assign a governor and a deputy governor.

“There will be a governor of Afrin. We don’t yet know who that will be. It will be someone from Turkey and will be assigned by the government. There will also be a deputy governor, also Turkish. Afrin will be attached to Turkey's Antakya [the seat of Hatay province]. The governors of Hatay and Afrin will coordinate,” he said.

According to Temo, in the first phase of three to six months, Turkey will train some 1,000 people to become Afrin's police force. During that process, the Turkish army will remain in Afrin.

In other words, the system applied at Jarablus, al-Bab, Azaz and Marea after their capture by the Turkish military will also be applied in Afrin. As Turkish Interior Minister Suleyman Soylu said Jan. 27, "Today we have deputy governors, police chiefs and gendarmerie commanders in Azaz, Jarablus and Marea.”

On March 23, Erdogan announced that a governor will be assigned to Afrin soon.

The PYD and its partners keep accusing those who participated in the Gaziantep meeting of betrayal. Sixteen Kurdish political parties in northern Syria that brand the Gaziantep action as illegitimate invited the parties in the Kurdish National Council to reconsider their attitudes. These pro-PYD political parties, including the Syrian Kurdish Left Party and the Kurdish Democratic Party in Syria, released a joint statement: “We declare that the assembly formed in Gaziantep under the supervision and direction of the Turkish [National Intelligence Organization] is illegitimate."

The Democratic Society Movement — a multi-ethnic umbrella organization that governs Rojava in Syria and is led by the PYD — made a similar declaration, saying the assembly members in Gaziantep "are blatantly betraying the Kurdish people."

"They are legitimizing occupation and accepting demographic change," the Democratic Society Movement said, calling the assembly members "accomplices to the murder of 1,500 civilians." That figure, however, is for YPG fighters, not civilians, according to the Syrian Observatory for Human Rights.

When the Gaziantep assembly starts functioning, cracks among the Kurds are bound to widen, and may even escalate to clashes. This assembly that is laying a claim on Afrin, where the PYD has the largest popular base, as it also does in Kobani, will not last for long when Turkey removes its financial support and sponsorship. We remember that in 2011, when anti-Syrian regime protests erupted, the Kurdish National Council could not mobilize people as much as the PYD did, even in the traditional Kurdish National Council bastion of Qamishli.