Real target of Erdogan's Olive Branch could be US clout

In the third week of Turkey's frustrating fight against Syrian Kurdish forces in Afrin, President Recep Tayyip Erdogan may be betting on an even bigger payoff than domestic support: seeing the United States effectively pushed out of Syria. 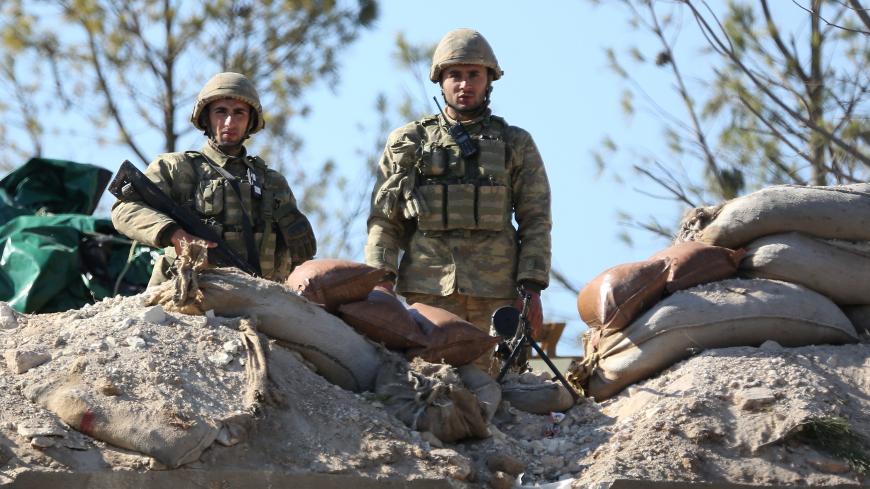 As Turkey’s offensive against Syrian Kurdish forces in Afrin grinds on for a third week, the prevailing wisdom is that NATO’s second-largest army is getting bogged down. Critics point to the number of Turks killed in combat — at least 31 in 26 days — the swelling pile of disabled helicopters and tanks and the slow pace of Turkish advances into the hilly enclave. A veteran Kurdish politician went so far as to suggest that Afrin would become Turkey’s “Vietnam.”

Others highlight Turkish President Recep Tayyip Erdogan’s efforts to leverage the tidal wave of Turkish nationalism inspired by Afrin for political gain. Never mind the cost, the real objective of Operation Olive Branch, they say, is to help cement his victory in the presidential elections due to be held in 2019.

The plan is contingent on Russia’s blessing, as it controls the airspace over Afrin. Meanwhile, Turkey’s relations with its NATO ally the United States are in full meltdown because the Syrian Kurdish militia that Turkish forces are targeting is the US-led coalition’s top partner against the Islamic State. US Secretary of State Rex Tillerson is due to meet with Erdogan in Ankara today amid worries of a military confrontation in Syria.

But not everyone agrees with the picture being painted of a flailing and increasingly isolated giant unleashed by a ruthless and self-serving leader at the mercy of Russia. To the contrary, Turkey is playing the long game and it’s the United States that is isolated in Syria, argues Fabrice Balanche, a French academic and fellow at the Hoover Institution who specializes in Syrian affairs.

Balanche, who just returned from a three-week research trip to northern Syria, told Al-Monitor in a wide-ranging interview, “America’s current policies … will lead to America’s defeat in Syria. At some point they will be forced to pull out because … US soldiers will get blown up.” Balanche said he had reached this conclusion after talking to scores of Arabs living under effective Kurdish control in the mainly Arab towns of Raqqa, Tell Abyad and Manbij.

As the war against IS winds down, Balanche observed, problems that existed prior to the campaign have come back with a vengeance. Economic needs once again outweigh basic security. In Arab eyes, the Americans are mainly helping the Kurds. Frustration among Arabs is reaching a boiling point and Turkey, which is home to more than 3.5 million Syrian refugees, is “eager to exploit” it. Angry Arab youths are “the future Taliban” and could target Americans. But “because the Americans on the ground don’t mix with the Arab population for security reasons, they have no idea what is going on.”

The Kurdish-administered northeastern belt of Syria is the country’s breadbasket and also contains much of its oil and dams. Yet according to Balanche the economic situation is “explosive.”

There is virtually no aid coming in, he said, explaining, “America is very stingy and the Saudis are focused on Yemen.” There is not enough water to irrigate crops. Bombs destroyed irrigation canals. Electricity is provided for only part of the day, from 4 p.m. to 11 p.m. Villagers can no longer grow crops.

Turkey, which controls the headwaters of the Euphrates River, on which Syrian agriculture heavily relies, has reportedly reduced the flow, increasing both Syrians' misery and the pressure on the YPG. Last year, Turkey shut down the operations of Mercy Corps and several other humanitarian outfits delivering aid to northern Syria because the areas they serviced included those run by the YPG.

In January, violent protests erupted in Manbij amid allegations that the YPG-led Syrian Democratic Forces had arrested and tortured two civilians from the city. The unrest was spurred in part by the forced conscription of Arab youths by the group — a practice that has since been scrapped — and led the YPG to grow even tougher, in Balanche’s words to “prevent a spreading revolt.”

Turkey’s offensive in Afrin has added to the climate of repression and economic decline. Turkey is in no hurry to leave and can absorb further casualties amid robust public support for Operation Olive Branch.

Indeed, most Turks accept the government’s narrative that the YPG is no different from the Kurdistan Workers Party (PKK), which is fighting Turkish forces inside Turkey and therefore needs to be eliminated as well.

Howard Eissenstat, a Turkey researcher at St. Lawrence University and a senior nonresident fellow at the Project on Middle East Democracy, argues that Erdogan's electoral calculations figure only partially in Olive Branch. He told Al-Monitor that the Afrin campaign has “delivered real benefits for Ankara: It ensures that Turkey plays a role in determining the shape of northern Syria and demonstrates to the United States the costs and limits of its own poorly thought-out policy in Syria.”

Erdogan’s threats to move against the YPG in Manbij and expand the campaign all the way to the Iraqi border may well embolden some Arabs to switch sides. The shift, in turn, would disrupt the coalition’s ongoing efforts to flush out IS remnants in the Middle Euphrates Valley and stabilize the towns and cities liberated from the jihadis.

“Arabs are getting scared,” Balanche said. “'It's not our war,' they say and don’t want to be caught in the middle." As they watch life return to a semblance of normalcy in Aleppo and Damascus, with running water, electricity and functioning schools, for a growing number of Arabs in Manbij who described the period of Turkish-allied Free Syrian Army rebel rule as the worst experience of all, “the idea of the regime returning seems less unpalatable.”

It may be true for Turkey as well: Faced with a choice between the YPG and the Syrian regime as its neighbors, Ankara would likely plump for the latter. In the meantime, Balanche concluded, “America has lost Turkey and its sole ally in Syria is the PKK.”