Observation posts will soon dot the Syrian-Turkish border to calm the tension between the US-allied People's Protection Units and Turkish forces. 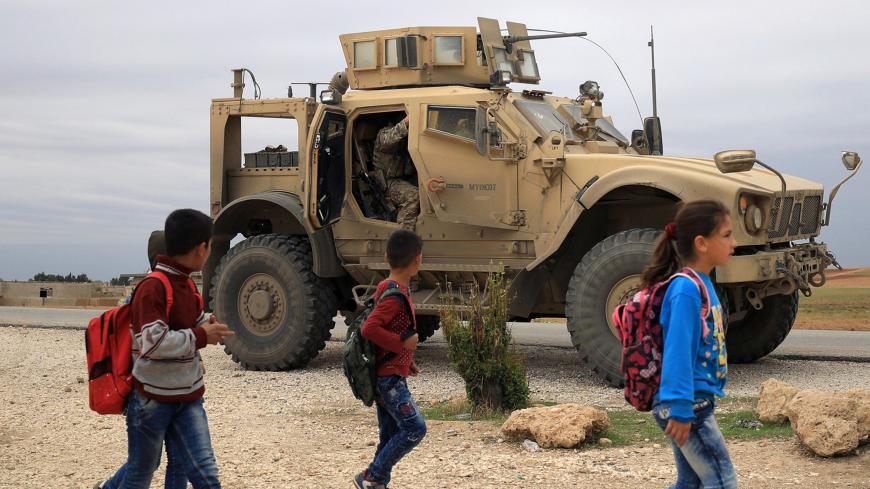 The US-led coalition will press ahead with the establishment of observation posts to deconflict Turkish and Kurdish forces along the Syrian-Turkish border despite Turkish objections, according to sources with intimate knowledge of coalition planning.

Speaking to Al-Monitor on the condition they not be identified, the sources recalled that Turkey had justified its military buildup along the Syrian border facing territory controlled by Syrian Kurdish forces and its plans to invade on the grounds that the militants known as the People’s Protection Units (YPG) were firing at Turkey “all the time.” The sources asserted that with coalition forces deployed in the border area, they would be in a position to ascertain where the Turks are being shot at and prevent the YPG from doing so. The reality, however, in the words of one of the sources, is that the “YPG is not firing across the border.”

Turkey continues to exert pressure over the US administration to scotch its partnership with the YPG because of the group’s tight links with Kurdistan Workers Party (PKK) militants, who are fighting a bloody insurgency within Turkey. To Ankara the deployment of coalition forces along the border looks more like protecting the militants against Turkey than the other way round.

The United States Central Command, which oversees operations in Syria, did not respond to Al-Monitor’s request for comment. But a commander in the YPG-led Syrian Democratic Forces told Al-Monitor via WhatsApp, “US forces have already done reconnaissance work along the border. No observation posts have yet been established but there are 12 being planned in Kobani, Tell Abyad, [Ras al-Ain] and Amude.” The places he mentioned all lie within the US-protected zone and close to the Turkish border. The commander added, “Construction is expected to start very soon.” Previous media reports citing Syrian Kurdish officials put the number of planned observation posts at five.

Turkish Defense Minister Hulusi Akar told the state-run Anadolu news agency on Nov. 24 that he had conveyed Turkey’s unease to US Chairman of the Joint Chiefs of Staff Gen. Joseph Dunford on the sidelines of the Halifax International Security Forum the week prior. He had told Dunford the observation posts would have a “negative impact” and create the impression that “US soldiers are somehow protecting terrorist YPG members and shielding them.” The move would make an already complex situation “much more complex.”

That is something of an understatement. The US partnership with the YPG has, to Moscow’s delight, driven already troubled US-Turkish ties to the brink of collapse. In January, Turkish forces invaded mainly Kurdish Afrin, which lies outside the US-protected zone to the west of the Euphrates River. The operation dubbed “Olive Branch” undermined the coalition’s ongoing campaign against the Islamic State as YPG fighters redeployed to Afrin to help defend the hilly enclave where much of Syria’s olive oil is produced.

The YPG briefly paused anti-IS operations again in Deir ez-Zor after Turkey began shelling its positions in the Kobani region in late October, killing at least one militant. A $12 million bounty placed on the heads of three top PKK commanders based in Iraqi Kurdistan has done little to calm Turkish jitters. Nor has the long delayed launch at the start of November of joint patrols by Turkish and US forces northwest of the contested town of Manbij along the demarcation line dividing Turkish-controlled territory in Syria from the area run by the YPG-friendly Manbij Military Council.

President Donald Trump’s special envoy to Syria, Ambassador Jim Jeffrey, has been trying to mend ties with Turkey over Syria and Manbij is being touted as a laboratory where Turkish and US interests can somehow be reconciled. Manbij has been an abiding source of friction between the NATO allies since August 2016, when the YPG backed by coalition airpower seized the town from IS. Washington had promised Turkey that the YPG would withdraw from Manbij, which lies to the west of the Euphrates River, as soon as it was liberated. But that never happened.

Sources familiar with the administration’s thinking told Al-Monitor that that the envisioned “Manbij model” keeps Turkey out of the town but gives it full visibility into it, with YPG sympathizers being weeded out of the local governing and military councils. Over time, Turkey’s aid agency TIKA, which operates in Turkish-controlled zones, could move in to help rebuild the town, encouraging refugees from Manbij currently residing in Turkey to return. This template could be then replicated in other parts of the US-controlled zone, where ethnic Arabs constitute a majority as is Manbij.

The trouble is that Jeffrey has also stated that the US military mission in northeast Syria is both ensuring the enduring defeat of IS and “contesting more actively Iran’s activities, particularly in Iraq, Syria and Yemen.” And “this means,” he said, “we are not in a hurry to pull out.” This, in turn, means that US forces will need to continue to rely on the YPG, which remains the most effective partner force for the coalition. How this squares with a reset with Turkey remains a mystery, particularly since Turkey’s President Recep Tayyip Erdogan has shown absolutely no interest in resuming peace talks with the PKK.

Fabrice Balanche, a French academic at the University of Lyon II who specializes in the Middle East, aired skepticism over the continued US presence in northeast Syria. “The problem is that the United States cannot deploy forces the full length of the Turkish-Syrian border,” he told Al-Monitor. “Two thousand men isn’t much,” he said, referring to the estimated number of US special operations forces in northeastern Syria. “And in case of a fresh Turkish attack, which most likely would target Tell Abyad, I don’t see how the YPG can continue to fight IS on behalf of the United States.” That may well be Erdogan’s calculation as well.