The move highlights the complexity Washington faces in its efforts to maintain a military presence in Syria while appeasing fellow NATO ally Turkey. 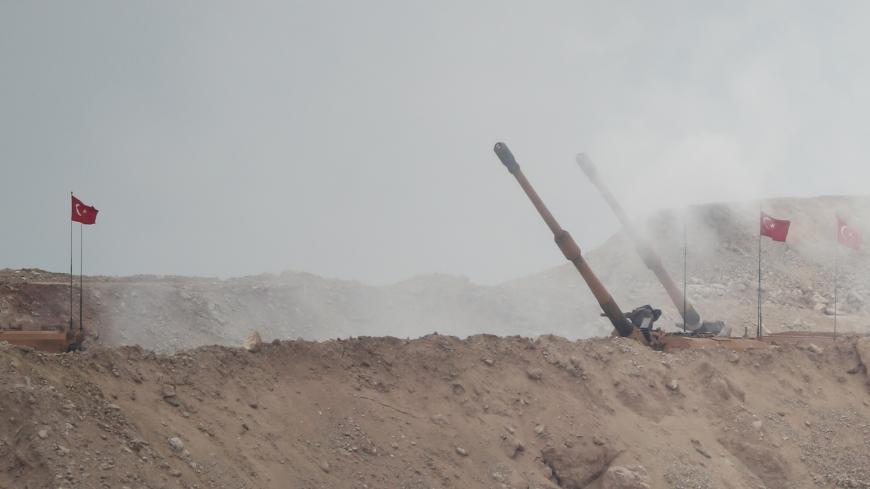 A Turkish army howitzer fires from a military post on the Turkish-Syrian border in Hatay province, Turkey Feb. 26, 2018. - REUTERS/Umit Bektas

The United States has established at least three observation posts along the Turkish-Syrian border in an apparent dismissal of Turkish concerns about their role, an official with the Syrian Democratic Forces (SDF) asserted today. The move highlights the complexities bedeviling the United States’ efforts to maintain a military presence in Syria with the help of the Syrian Kurdish People’s Protection Units (YPG), who are the core component of the SDF, while scrambling to appease fellow NATO ally Turkey.

Contacted via telephone in northeast Syria, the SDF official — who spoke on condition that he not be identified by name — said the posts had been established in Kobane, Tell Abyad and Ras al-Ain in US-protected territory along Syria’s northeastern border with Turkey.

There is nothing secret about the deconfliction effort. US Secretary of Defense James Mattis announced in late November that he had given orders for the posts to be established. Turkey’s pro-government Yeni Safak labeled these posts “rogue espionage towers” erected in defense of “terrorists” — all part of a broader scheme in tandem with the United States’ “new partners,” Saudi Arabia, the United Arab Emirates and the PKK [Kurdistan Workers Party], to establish a “greater Israel.”

The reality is rather more prosaic. Col. Sean Ryan, US spokesman for the anti-Islamic State (IS) coalition, declined to divulge details as to the current status or whereabouts of the posts. But in emailed comments to Al-Monitor, Ryan asserted, “US forces are examining and securing locations for manned observation posts on the Syrian-Turkish border, and the reason is to support security and stability on the border and improve the coalition’s situational awareness to enable the continuing fight against IS.” In other words, the posts are being established.

The formal aim is to prevent YPG militants from firing on Turkish forces across the border and avert an escalation of tension that would in turn undermine the ongoing campaign against IS. But in Turkish eyes, the posts are designed to protect the Kurds. Turkish Minister of Defense Hulusi Akar renewed Turkish calls for the observation post plan to be scrapped during talks with the United States’ Syria envoy, Jim Jeffrey, who was in Ankara last week.

Jeffrey, a former ambassador to Ankara who is seen as sympathetic to its concerns, has been working hard to reconcile Turkish and American interests in Syria, but to little avail. This has involved accelerating the implementation of the Manbij roadmap, but progress remains bumpy. On Nov. 1, US and Turkish forces began long-delayed joint patrols around Manbij, a mainly Arab town run by YPG friendly locals whom Turkey wants to be replaced with its own proxies.

Yet even after the patrols began, Turkish-backed Syrian Arab rebels have continued to target coalition forces in Manbij from the Turkish-held Euphrates Shield zone. The sustained harassment of coalition troops is meant to pressure the United States to yield to Turkey’s demands for full control over Manbij.

Aaron Stein, a senior fellow at the Atlantic Council who closely monitors the Syrian conflict, contends that Jeffrey believes he can help split the PKK and the YPG and “enlist Turkey in the administration’s maximum pressure strategy of sitting and waiting for the regime to decapitate itself while increasing pressure on Iran.”

But Stein told Al-Monitor that “the YPG and the PKK cannot be split. And without Turkish-PKK agreement, introducing Turkish Armed Forces into YPG areas will be destabilizing.”

Turkey insists that the YPG poses an existential threat to its security and continues to pressure Washington to abandon its partnership with the group. This is because of the YPG’s organic ties to PKK militants who remain locked in a bloody and seemingly inconclusive war against the Turkish army. Having successfully driven the YPG out of its Afrin stronghold to the west of the Euphrates with Russia’s help, Turkey is threatening to carry its campaign east of the river to the US-protected zone where the Kurdish militants hold sway. They enjoy the protection of several thousand US Special Operations forces and other military personnel from the US-led coalition.

According to sources with close knowledge of the US administration’s thinking, Jeffrey, a veteran diplomat who's served in key positions, now recognizes that any US military presence in Syria needed to defeat IS and contain Iran cannot be sustained without the SDF. There is no policy change with regard to the partnership with either the SDF and the YPG, and “no plans to establish an alternative force to them.” But once the jihadis are defeated, configurations as to who holds particular areas and ensuring the areas are local in character — Arabs in Arab majority areas and Kurds in Kurdish majority ones — will be assessed. Even the YPG is open to this.

Turkey’s President Recep Tayyip Erdogan remains adamant that his army will boot out the YPG from the stretch of territory running from Manbij to the Iraqi border. Coming in the run-up to critical municipal elections in March, a Turkish attack calculated to garner nationalist votes to detract attention from a weakening economy cannot be ruled out.

Still, the observation posts make it less likely that Turkey will risk confrontation with US forces. The presence of coalition observers also makes it harder for Turkey to claim that the YPG is the aggressor. But they won’t necessarily be around forever. Ryan noted, “The coalition does not define an observation post as a permanent structure by military means … everything is based on revolving battlefield assessments and can change as the mission dictates.” But ultimately, it’s the commander in chief, US President Donald Trump, who calls the shots.