Turkish and US troops have begun joint ground patrols in the area of Tell Abyad, the first time Turkish troops crossed into the US-protected and Kurdish-administered zone. 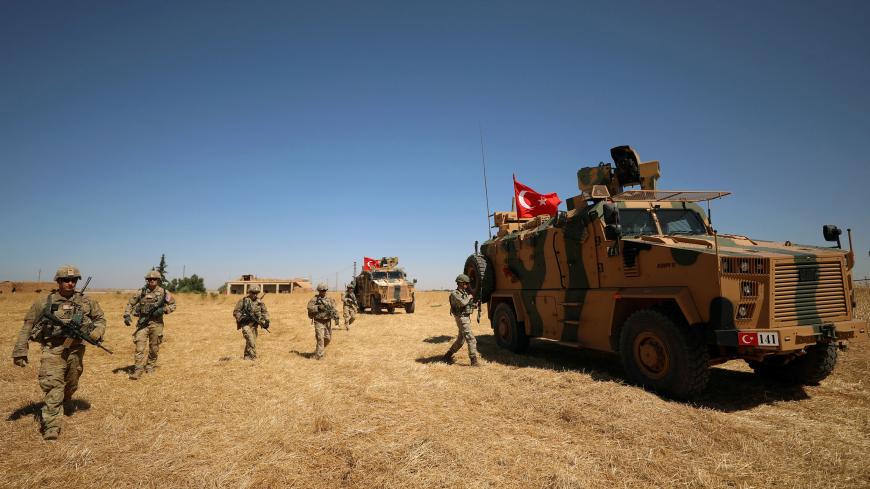 When Turkey’s President Recep Tayyip Erdogan threatened to attack the United States’ Kurdish allies in northeastern Syria, the US-led coalition would often respond by dispatching a mobile patrol prominently displaying the US flag within sight of Turkish troops across border. On Sunday, Turkish and US troops conducted their first joint ground patrol in and around Tell Abyad, a mainly Arab town that until its 2015 capture by the Syrian Kurdish People’s Protection Units (YPG) served as a critical gateway for thousands of foreign jihadist fighters flowing into Syria via Turkey.

The exercise marks the first time Turkish troops crossed into the US-protected and Kurdish-administered zone in northeastern Syria to the east of the Euphrates River and is part of ongoing efforts between Turkey and the United States to establish a so-called security mechanism that many Syrian Kurds worry may torpedo their own.

In Ankara’s eyes its overarching purpose is twofold: to pressure the United States into severing its partnership with the YPG as soon as possible and to create a safe zone running ideally from another Arab-majority town, Manbij, all the way to the Iraqi border. Ankara wants to send back up to a million of the estimated 3.6 million Syrians sheltering in Turkey who have become a huge political liability for Erdogan.

For Washington, the security mechanism is meant to avert a Turkish invasion and protect its allies in the YPG-led Syrian Democratic Forces (SDF) so they can, in the words of coalition spokesman Col. Myles B Caggins III, “remain focused on the enduring defeat” of the Islamic State (IS). In a statement, Caggins noted that Turkish forces had “observed first-hand progress on destroyed YPG fortifications and areas where YPG elements voluntarily departed the area.”

Washington’s other main goal is to leverage the security mechanism to restore ties with its NATO ally that have been battered by a slew of other toxic issues, not least Turkey’s acquisition of Russian S-400 missile batteries.

The results so far are not encouraging. Erdogan took a further swipe at the United States just as the patrols began, saying, “Three to five helicopters and a few hundred soldiers in the area” were “not enough” to form a safe zone. He griped before a crowd in the eastern city of Malatya, “It seems Turkey’s ally is pursuing a safe zone in northern Syria, not for Turkey but for the terrorist group.”

If the United States fails to deliver, he suggested, Turkey would take matters into its own hands.

Salih Muslim, the spokesman and former co-chair of the YPG-linked Democratic Unity Party, said, “The talks between Turkey and the United States are continuing and the SDF and the Syrian Democratic Council are being briefed on them and asked for their view. We don’t know what the outcome will be.”

The immediate point of contention is the depth of the area where Turkey will be permitted to operate and in what numbers. The United States is drawing the line at 15 kilometers (nine miles). Turkey wants double that. The uncertainty is deeply unsettling for the SDF, which had until recently declared the presence of any Turkish forces a red line.

“Some Turkish forces going on tours with US soldiers was something we agreed to but any permanent Turkish troop deployments in our region is unacceptable and above all to the people living here,” Muslim told Al-Monitor from the northeastern town of Qamishli.

So far Erdogan’s tactics of threatening intervention and wresting concessions from the United States, each time at zero cost, appear to be working.

“The SDF is being forced into making all the concessions, in return for what?” asked Kamran Hajo, the head of the opposition Kurdish National Council’s external relations department.

“What is the American vision for the region? What will it be in a week, two years, nine hours? We don’t know,” Hajo told Al-Monitor.

Muslim believes that Erdogan’s bellicosity is linked to his efforts to hold together his informal coalition with ultranationalist leader Devlet Bahceli and assorted hawks within the security establishment known as the Eurasianists. The latter, whose numbers and reach remain a mystery, favor closer ties with Russia and China over the United States. They furiously oppose political dialogue with the Kurds that would help end a 35-year insurgency led by the YPG’s mentor, the Kurdistan Workers Party.

Muslim agreed with a theory being aired by some observers that Turkish Defense Minister Hulusi Akar is distancing himself from the hawks and driving efforts to patch up relations with the Americans.

“I have no proof of this,” Muslim said, “but I sense he is more of a realist and is concerned with the facts on the ground, not with fantasies.”

Either way, Muslim asserted, Erdogan’s rhetoric is boosting confidence within IS. “We see a resurgence, an uptick of attacks by DAESH, who feel emboldened by Erdogan,” he said using the Arabic acronym for the jihadis. “The fight against DAESH is being undermined.”

Russia must also be pleased by this state of affairs, Muslim contended, because in Moscow’s calculations the more Erdogan threatens the Kurds, the more likely it is that the Kurds will be forced to turn to the Syrian regime for help. “They must be egging him on."