US sends Syria envoy to Ankara ahead of Geneva talks

US Syria envoy Jim Jeffrey is expected to meet with Turkish officials to discuss the US-backed Kurdish militants along its border as part of his continuing efforts to arrange a safe zone in the area. 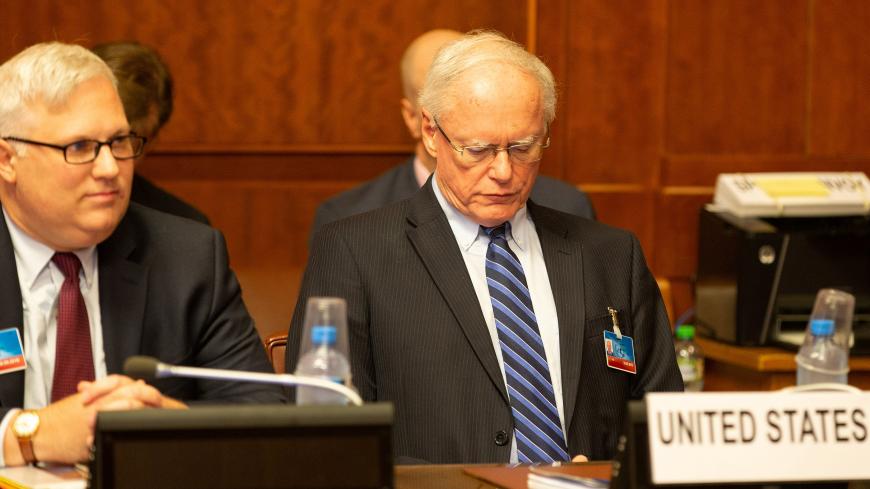 US special envoy for Syria James Jeffrey (R) attends a meeting during the consultations on Syria at the European headquarters of the United Nations in Geneva, Switzerland, Sept. 14, 2018. - Xu Jinquan/REUTERS

The US administration’s top Syria envoy Jim Jeffrey will hold talks with Turkish officials in Ankara tomorrow to discuss what the State Department called in a statement Turkey’s “legitimate security concerns,” which is shorthand for Ankara’s worries about the presence of US-backed Kurdish militants along its border.

Sources familiar with Jeffrey’s efforts to broker a deal between Turkey and the Syrian Kurdish People’s Protection Units (YPG) for a proposed safe zone aired skepticism that the US diplomat would mark much progress before heading to Geneva for meetings with the Syrian Small Group that includes officials from Egypt, France, Germany, Jordan, Saudi Arabia and the United Kingdom, all potential contributors, or so Washington hopes, to a proposed safe zone in northern Syria.

Jeffrey’s demands — first reported by Al-Monitor — for the YPG-led Syrian Democratic Forces (SDF) to let a limited number of Turkish forces into Syria to police the proposed zone were firmly rejected by SDF commander Mazlum Kobane when the pair met in Syria two weeks ago. Kobane reportedly told the US diplomat that he would only consider the idea if Turkish forces pulled out of the mainly Kurdish enclave of Afrin, which they have occupied since March 2018.

Ankara is highly unlikely to pull out of Afrin because the YPG tells it to and Kobane would know that — least of all as the YPG-linked Afrin Liberation Forces steps up its insurgency against the Turkish military and their Free Syrian Army allies there.

Turkey’s Defense Ministry confirmed that one Turkish soldier was killed and three others wounded yesterday in the region during an attack it blamed on the YPG, but offered no further details.

It's not just the Kurds who are unhappy with the US plans for a safe zone. Turkey is also disgruntled at being offered no more than a symbolic presence, one of the sources with close knowledge of the talks told Al-Monitor on strict condition of anonymity.

Turkish President Recep Tayyip Erdogan reportedly aired Turkish ire over the United States' continued alliance with the YPG again in his telephone conversation Monday with President Donald Trump. Erdogan’s office asserted in a readout that the leaders had exchanged views on recent developments in Syria and had agreed to maintain close cooperation on the anti-terror fight. For Turkey, terror and the YPG are synonymous.

The main focus of the call, however, was Turkey’s offer to establish a joint committee to resolve differences stemming from Turkey’s controversial deal to acquire Russian-made S-400 missiles. The Turkish offer was earlier rejected by Washington, which is threatening sweeping sanctions if the deal is not shelved.

Today, Erdogan spoke by telephone with Russian President Vladimir Putin. Erdogan’s office said the leaders had agreed on the need to pursue close cooperation in order to resolve the Syrian crisis. The Kremlin said in a separate statement that Putin and Erdogan had called for a cease-fire in Libya and the renewal of a political process under UN auspices. And did he reassure Putin that the S-400 deal was still on? Turkey’s consistent messaging on the issue, that it will proceed with the purchase despite Washington’s threats, suggests that he may have done just that.