US envoy kicks off Syria safe zone talks in Ankara

According to Turkish reports, US Syria envoy Jim Jeffrey discussed the contentious safe zone as well as "operations east of the Euphrates" with officials in Ankara, but deep differences between Turkey and the Syrian Kurds make a deal look just as remote as ever. 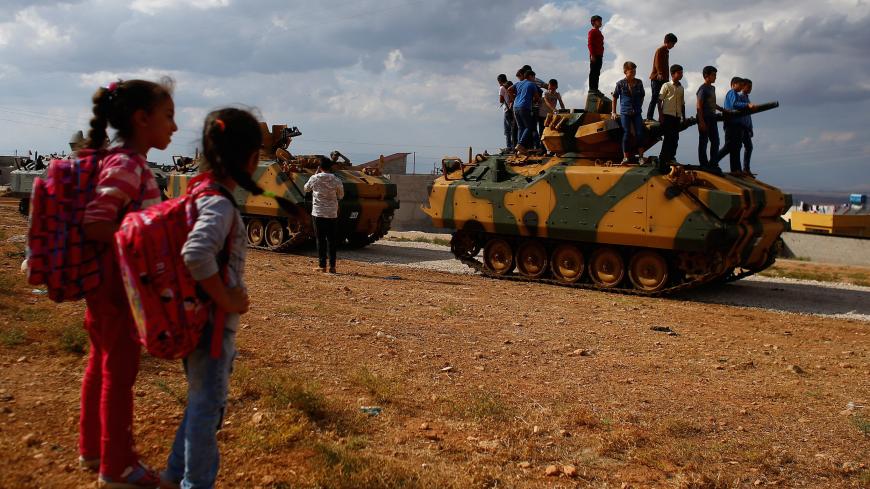 Boys stand on top of a Turkish Armed Forces vehicle as a military convoy passes by their village on the Turkish-Syrian border in Reyhanli, Hatay province, Turkey, Oct. 11, 2017. - REUTERS/Osman Orsal

The Donald Trump administration’s top envoy for Syria engagement, Jim Jeffrey, met with Turkish presidential spokesman Ibrahim Kalin in Ankara today to kick off talks on a proposed safe zone in northern Syria amid continued disagreement between Turkey and US-backed Syrian Kurdish military commanders over its shape, size and purpose.

The pro-government Turkish daily Sabah said the US and Turkish delegations had discussed the safe zone alongside what it described as “operations east of the Euphrates” and other Syria-related issues. Turkey has repeatedly threatened to mount a military offensive against the Syrian Kurdish People’s Protection Units (YPG) over the group's links to the Kurdistan Workers Party (PKK), the guerrilla outfit that has fought the Turkish army for Kurdish independence and then autonomy for the past 35 years.

Turkey wants a lead role in a safe zone that would be 32 kilometers (20 miles) deep and stretch the length of Syrian Kurdish-controlled territory all the way to Iraq. The commander of the YPG-led Syrian Democratic Forces (SDF), Mazlum Kobane, has reportedly agreed to a cordon sanitaire to stave off Turkish attacks that would be no more than five kilometers (three miles) deep and protected by local Arab and Kurdish forces, who would ostensibly be subject to coalition — and by extension Turkish — vetting. But Turkey isn’t interested and the YPG is dead set against letting Turkish boots onto their soil, suggesting they would only do so if they got Turkish-occupied Afrin back, a proposal they know to be a non-starter.

It remains unclear how Jeffrey hopes to bridge differences when both sides are in no mood to compromise.

Turkish forces continued to shell YPG targets in the northern Aleppo countryside near Afrin a day after a Turkish soldier was killed by the Kurdish militants when they attacked a Turkish armored vehicle with air-to-ground missile near the Al-Shatt checkpoint, the Syrian Observatory for Human Rights reported.

The SDF has said winning back Afrin is its new priority now that the Islamic State has been defeated.

Aaron Stein, director of the Middle East program at the Philadelphia-based Foreign Policy Research Institute, said, “Only one side here is truly negotiating, and that is the United States. The Turks and the SDF are stating maximalist positions and unwilling to actually engage on substance or entertain compromise because they are hostile and antagonistic actors.” Stein further noted in an interview with Al-Monitor, “The United States is pushing to reach agreement on a token Turkish presence, largely to assuage Ankara so as to ensure that the Americans remain in the northeast to pressure the Syrian regime. Ankara doesn’t actually care about [Syrian President Bashar al-Assad], as they want to ensure that the PKK doesn’t continue to flourish in the tri-border area.” He was referring to Turkey’s borders with Iran, Iraq and Syria, where the PKK maintains a foothold.

More critically, however, US efforts to stitch together a safe zone deal are undermined by its broader and some would say contradictory goal of containing Iranian influence in Syria. Stein noted, “The real schism is inside American policy, which is to make life miserable for Assad, which when combined with Iran sanctions could theoretically lead to a weakening of these two actors’ positions. The problem is that that both of these policies — the Iran pressure and the US presence — are at odds with what Ankara wants. The United States is making a choice here, even if it refuses to accept that it is choosing the anti-Iran, anti-regime effort over the Turkey relationship.”

It is also at odds with what the Kurds want, which is a safe zone modeled along the Iraqi Kurdish one set up in 1991 that allowed them to consolidate their autonomy. They believe if Washington wanted to it could force Ankara to accept this, much like it did the safe zone in Iraqi Kurdistan, albeit kicking and screaming along the way. Anything short of that kind of commitment makes confronting Iran an extremely risky business for the Kurds because the PKK’s bases are right along the Iranian border.

Stein reckons it would be in Turkey’s interests to accept the current US proposal for a limited presence in the safe zone. “There is no hammered-out implementation mechanism with agreed upon definitions which allows Ankara to set its own interpretation. This lack of clarity then gives Ankara tools to hammer the United States, sowing discord in our own system [and thereby] leading to more concessions.”

But how would the YPG respond? Would it play along in the hope that Turkish President Recep Tayyip Erdogan, whose ruling Justice and Development Party was weakened in the March 31 municipal elections, would turn to the Turkish Kurds once again? After all, the PKK’s calculations in Syria are indexed to its core interests in Turkey, home to the largest Kurdish population worldwide.

Then there are the other main stakeholders, the regime and its main backers Russia and Iran, to contend with. For the Kurds, maintaining a facade of progress with the Turks and the Americans could spook the regime into offering more than the hard return it's presently trying to shove down their throats.

Ilhami Isik, a Kurdish columnist and former member of the Turkish Communist Party who used to support Erdogan, claimed this week that the fruits of indirect talks taking place between the Turkish government and the SDF, presumably via the United States, would be revealed on the 15th day of the Ramadan fast. “It seems as if traffic on the island will pick up,” he said, referring to Imrali Island, where PKK leader Abdullah Ocalan has been held since his capture in 1999 with the CIA’s help.

Ocalan has been held virtually incommunicado since 2015, when peace talks between the government and the PKK fell apart. Isik, then known by his code name “the fisherman,” was the first to leak news of the talks, which he supposedly facilitated, to the now shuttered Taraf in 2010, so his words may carry some weight. The PKK leader’s intervention is likely to prove critical in persuading an estimated 3,000 Kurdish hunger strikers across 90 prisons in Turkey to end their fast in protest of Ocalan’s isolation.

For all their hawkish posturing, the Turkish authorities are deeply nervous of the likely violent reaction the strikers’ deaths would trigger, providing justification for the PKK to step up attacks inside Turkey.

Giran Ozcan, the Washington representative for the largest pro-Kurdish bloc in the Turkish Parliament, the People’s Democratic Party (HDP), told Al-Monitor, “The most concrete sign that the government is interested in resuming peace talks would for Mr. Ocalan to be granted immediate access to his lawyers.” The 70-year-old has not been allowed to meet with them since 2011. But Erdogan's continued salvos against the the HDP offer scant hope for change.

Correction: May 1, 2019. An earlier version of this article mistakenly identified Ilhami Isik as a former PKK militant. He was a former member of the Turkish Communist Party.