While the United States is pushing for a safe zone along the Turkish border in Syria to protect both sides, analysts warn that meeting their conflicting needs may prove impossible. 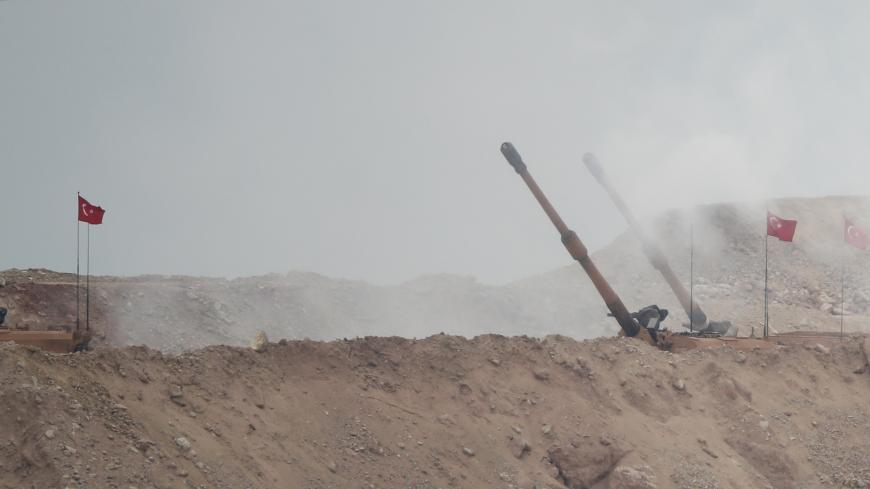 A Turkish howitzer fires from a military post on the Turkish-Syrian border in Hatay province, Turkey, Feb. 26, 2018. - REUTERS/Umit Bektas

Syrian Kurdish officials say they remain opposed to any US plans for a safe zone that would foresee the further injection of Turkish forces and their rebel opposition Free Syrian Army allies in territories currently under their control along the Turkish border, saying any such arrangement would escalate tensions and add to instability. “A safe zone that allows for Turkish troops to come into our areas is completely unacceptable. The US goal should be to prevent Turkish aggression against us as we have no aggressive intentions toward Turkey,” a senior official in the Kurdish-led Syrian Democratic Forces (SDF) told Al-Monitor in a telephone interview.

The official was responding to the latest comments by Jim Jeffrey, the United States’ Syria envoy, about a proposed safe zone.

In a State Department press briefing yesterday, Jeffrey said, “In terms of the Kurds, what we’re working with is with Turkey to have a safe zone of some length along the Turkish border where there would be no YPG forces, because Turkey feels very nervous about the YPG and their ties to the PKK.” YPG is the acronym for the Syrian Kurdish People’s Protection Units, the militia that played an instrumental role at the helm of the SDF in securing the defeat of the Islamic State. PKK stands for the Kurdistan Workers Party, the Kurdish rebel grouping that has been fighting the Turkish military since 1984 and oversaw the establishment of the YPG.

Turkey is livid over the continued partnership between the US-led coalition and the YPG and has been threatening to attack the group in the swath of territory extending from the east bank of the Euphrates River all the way to the Iraqi border, saying the group is a danger to its national security. Last year, Turkish forces proved they meant business when they drove the YPG out of the Kurdish-majority enclave of Afrin. Jeffrey noted, “We understand those concerns. We’ve been involved for many years dealing with the threats to Turkey out of the Qandil Mountains" in Iraqi Kurdistan, where the PKK command is based. He went on, “We don’t want to see another Qandil Mountains in Syria.”

The diplomat underlined, however, that the purpose of a safe zone would be to protect both sides. “We also do not want anyone mishandling our SDF partners, some of whom are Kurds. And so therefore, we’re working for a solution that will meet everybody’s needs.”

Some analysts say this may prove impossible.

Aaron Stein, the director of the Middle East program at the Foreign Policy Research Institute in Philadelphia, told Al-Monitor, “The issue remains the fundamental incompatibility of the SDF’s goals with Turkish security concerns.” These goals, outlined in detail by the SDF’s commander-in-chief Mazlum Kobane in a recent interview with Al-Monitor, include demands that the SDF be allowed to maintain control over the territories it currently runs in the northeast, which amount to a third of the country. He said this would be a necessary condition for any future agreement with Damascus, but it's one that the regime is unlikely to accept either.

The other glaring flaw in the safe zone idea is that none of the Europeans called upon by US President Donald Trump to help police the zone have shown any interest in doing so.

Stein said, “There is talk of trying to work around this problem and introduce a third force into the proposed buffer zone, but this isn’t in line with what the Turks are saying publicly that they want.” Turkey wants its own forces to monitor the zone. The “third force” being considered are Syrian Kurdish militants loyal to the YPG’s political rivals grouped under the Kurdish National Council and Syrian opposition leader Ahmad Jarba’s Elite Forces. “But that is pie in the sky, fairy tales,” Stein added.

Faced with the prospect of a Turkish invasion once US forces withdraw, a large number of Kurds and Arabs living in SDF-governed territory say they view the return of regime forces as the lesser evil, especially if the Russians serve as guarantors in any such arrangement. Optimally they would like the Americans to be the guarantors but that is highly unlikely, given Washington's refusal to talk to Damascus and the introduction of new sanctions to squeeze it further.

If anything, the State Department’s current policy to broker a deal between the SDF and Turkey appears geared not so much to deconflict them as to prevent the regime from coming back. And while it disavows all interest in regime change, it wants Syrian President Bashar al-Assad to go and for the regime’s behavior to fundamentally change in character. Neither seems likely in the near future.

The SDF official concurred that Russian backing for the Kurds if and when they sit down with the regime is contingent on their breaking off ties with the United States. He summed up their dilemma, “But until we know what the United States’ actual plan is we don’t want to end our alliance with them.” In the meantime, the Russians appear happy to let Turkey continue its threats to attack the YPG. “The message is that ‘either you let the regime return or face the Turks, because the Americans will not defend you, just as they did not do in Afrin,’” the official said.