Did Trump’s decision on Golan undercut Putin mediation on Syria? 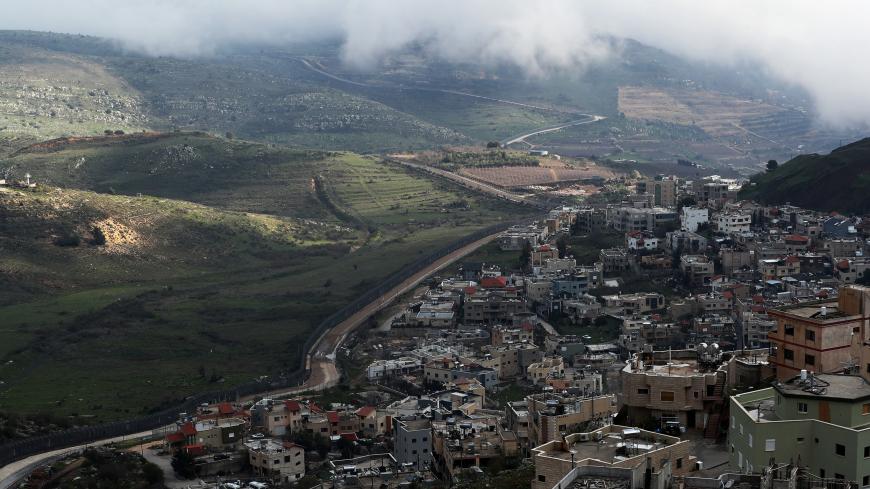 A general view shows the town of Majdal Shams near the cease-fire line between Israel and Syria in the Israeli-occupied Golan Heights, March 25, 2019. - REUTERS/Ammar Awad

Putin thought he had a deal in Helsinki

“With the United States recognizing Israeli sovereignty over the Golan Heights,” writes Maxim Suchkov, “the ‘security buffer’ between Israeli and Syrian/Iranian forces that Moscow sought to establish may be put into question, raising risks for a direct collision of enemy forces.”

“During the Helsinki summit that brought together [US President Donald] Trump and [Russian President Vladmir] Putin in July 2018,” adds Suchkov, “the Golan Heights was arguably the main item Putin could offer Trump to discuss in terms of US-Russia cooperation on Syria.”

According to Suchkov, “Russia has deployed its military police along the Bravo line that later enabled UN observers to return to their own mission to monitor the cease-fire and separation of the forces.”

As this column observed less than a week after the July 16, 2018, meeting in Helsinki, “the attention given to Trump’s remarks on Russian meddling in the 2016 election at the summit may be drowning out awareness of the impact of Helsinki, which is already being felt in the region.”

Al-Monitor may have been the only, or one of a very few, media outlets to report at the time on Putin’s mediation efforts between Israel and Iran regarding the Golan Heights following Helsinki. The Russian president said he and Trump “managed to agree on some aspects on Syria. … In particular on the southern de-escalation zone near the Golan Heights, with full consideration of Israeli interests — and we also earlier discussed this with our Iranian partners. So we are on the right track in regard to fixing the situation in a broader sense, not just Syria.”

“The south of Syria should be brought [in]to full compliance with the treaty of 1974, about the separation of forces — about separation of forces of Israel and Syria,” Putin explained at the time. “This will bring peace to [the] Golan Heights, and bring more peaceful [relations] between Syria and Israel, and also provide security for the State of Israel. Mr. President [Trump] paid special attention to the issue during today’s negotiations.”

Suchkov reported the week after the summit that Russia “is moving steadily toward gradual implementation of its vision for the Golan Heights, while conveying to Iran that these policies are the least painful solutions to the interests of the Islamic Republic when measured against disincentives of a larger regional war. Moscow also seeks to persuade Tehran that its proposal on the Golan Heights doesn’t mean Russia prioritizes Israel over Iran, nor does it undermine Russian-Iranian cooperation against what both deem terrorists in Syria. Between the lines, Moscow thus signals the Trump administration it is capable of ensuring Israeli security from what Trump and Netanyahu see as the biggest threat. … Iran understandably appears to be wary of Russia flirting with the Israelis and Americans. In this particular situation, however, it has a rather limited number of options: either agree to the vision that Moscow proposes — albeit with some amendments — or wave it off and face military escalation in addition to sanctions and pressure from within.”

Back in July, we wrote, “Putin is not someone who works for free. If he believes he is helping Trump to achieve a responsible exit from Syria, while assuring Israel’s security, this is big stuff, and the Russian president also needs a win from the art of the deal. For Putin, that means relief from at least some of the US sanctions on Russia. His offer of a referendum in Crimea can be considered part of this bigger package."

Suchkov concludes this week, “Some in Moscow believe, however, Russia is unlikely to appeal to the precedent with the Golan Heights to defend its own position on Crimea over concerns of antagonizing Israel. Yet the situation around the Golan Heights weakens the reasoning of those who opposed Russia’s takeover of Crimea. It may also create some leverage for Moscow in its own private deliberations with Europeans over sustainability of sanctions over Crimea.”

Although Turkish President Recep Tayyip Erdogan said March 22 that Trump’s decision on the Golan Heights “has brought the region to the brink of a new crisis,” that “doesn’t mean Turkey will put aside the conditions it has set for rebuilding its ties with Damascus,” writes Fehim Tastekin.

“Turkey is livid over the continued partnership between the US-led coalition and the YPG [Syrian Kurdish People's Protection Units] and has been threatening to attack the group in the swath of territory extending from the east bank of the Euphrates River all the way to the Iraqi border, saying the group is a danger to its national security,” writes Amberin Zaman. “Last year, Turkish forces proved they meant business when they drove the YPG out of the Kurdish-majority enclave of Afrin.”

Ankara’s announcement of joint military operations with Tehran against the Kurdistan Workers Party along the border, although not confirmed by Iran, “signals greater cooperation between Ankara and Tehran against Kurdish aspirations in the near future,” according to Semih Idiz. “Iran is also cool to the idea of any Kurdish autonomy in Syria and opposes the SDF [Syrian Democratic Forces].”

“Turkey expects the Syrian regime to develop a new constitution that provides rights for the opposition, and wants elimination of the autonomous Kurdish entities in northern Syria, which Turkey considers a threat to its border,” explains Tastekin. “Syrian peace talks held in Astana, Kazakhstan, and organized by Iran, Russia and Turkey, were built on United Nations Security Council Resolution 2254. The resolution emphasizes the importance of Syrian territorial integrity, but doesn’t make any reference to the Golan Heights problem, so it doesn't provide any possible solution on the matter. … The Iran-Russia-Turkey trio could very well add the Golan Heights matter to its agenda, to increase pressure on the United States, but even if that happens, nobody really expects the conflict to become a top priority for the three governments.”

“There is an emerging convergence of interests on the Kurdish question between Ankara, Tehran and Damascus,” adds Idiz. “The only thing preventing this from developing into a full-blown alliance between the three countries is the continuing antipathy felt for Assad by Turkish President Recep Tayyip Erdogan, who considers the Syrian leader to be one of his regional archenemies.”

“Many Turkish voices have, nevertheless, been arguing for some time that it is in Ankara’s interest to enter into meaningful dialogue with Damascus,” writes Idiz. “Turkey is already maintaining low-level talks with the Syrian regime through its intelligence service MIT, but many believe this is not enough to meet the growing challenges facing Ankara.”

“If anything, the State Department’s current policy to broker a deal between the SDF and Turkey appears geared not so much to deconflict them as to prevent the regime from coming back,” writes Zaman. “And while it disavows all interest in regime change, it wants Syrian President Bashar al-Assad to go and for the regime’s behavior to fundamentally change in character. Neither seems likely in the near future.”

“The SDF official concurred that Russian backing for the Kurds if and when they sit down with the regime is contingent on their breaking off ties with the United States,” concludes Zaman. “He summed up their dilemma, ‘But until we know what the United States’ actual plan is we don’t want to end our alliance with them.’ In the meantime, the Russians appear happy to let Turkey continue its threats to attack the YPG. ‘The message is that ‘either you let the regime return or face the Turks, because the Americans will not defend you, just as they did not do in Afrin,’ the official said.”