The US decision to recognize Israeli sovereignty over the Golan Heights makes Moscow consider its own balance sheet on the issue. 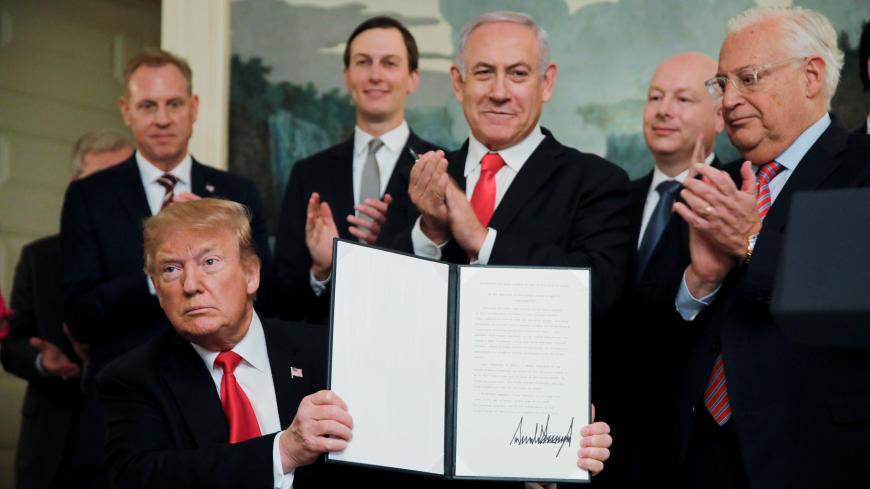 US President Donald Trump holds a proclamation recognizing Israel's sovereignty over the Golan Heights as he is applauded by Israel's Prime Minister Benjamin Netanyahu and others during a ceremony in the Diplomatic Reception Room at the White House in Washington, March 25, 2019. - REUTERS/Carlos Barria

MOSCOW — President Donald Trump’s statement on the need for the United States to recognize Israel’s sovereignty over the Golan Heights has sent shock waves all the way to Moscow. Kremlin spokesman Dmitry Peskov said the decision “may destabilize the already strained situation in the Middle East.”

Peskov added that the shift presented by Trump "by no means works for the tasks and goals" of the Mideast peace process. "It’s the other way round," he added.

"It was stated that a very unstable and strained situation in [the Middle East] must not be provoked by ill-considered actions and statements by countries that have a direct bearing on the settlement process," the Kremlin later noted.

Shortly after the announcement, the Israeli Embassy in Moscow initiated a meeting between Israeli Ambassador Gary Koren and Deputy Foreign Minister Mikhail Bogdanov.

The official readout of the encounter doesn’t list the Golan Heights as an item on the agenda, only mentioning that the diplomats “exchanged views on topical regional developments, including the Syrian settlement and Israeli-Palestinian affairs.”

The reaction in Moscow reflects both Russia’s official position on the issue as well as fears over the possible security implications of Trump's decision for the area.

“This situation in no way contributes to stability in the Middle East. In cases like this, one would do better just maintaining silence rather than exacerbating matters with such polarizing statements,” said Sergey Tsevkov, a member of the Foreign Relations Committee of the Federation Council (Russia’s Senate).

Two Russian diplomats who spoke to Al-Monitor on condition of anonymity argued that Trump’s decision may not change things on the ground dramatically, for he will just be formalizing the long-standing reality of the Israeli occupation of the Syrian territory, as Moscow sees it. However, Trump’s move gives Moscow an opportunity to both take another hit at his “deal of the century” and consolidate Russia’s own image of a more just, consistent and law-abiding mediator in the region.

Russia’s official statement on Trump’s announcement reads as follows: “Such statements are yet another indication of the contempt that Washington shows for the norms of international law, UNSC resolutions and the principle 'land for peace' adopted at the Madrid peace conference that both Russia and the US co-sponsored, as well as the Arab peace initiative. But [the statements] are in line with this [US] administration's course to revise the internationally recognized legal basis for the settlement of the situation in the Middle East."

The reference to the cooperation between Moscow and Washington over the area is important. Although Russia sees the Golan Heights as an occupied territory, Moscow also perceives it as a possible de-confliction zone between Israel and Syria (and, by extension, Iranian-backed militias).

During the Helsinki summit that brought together Trump and Putin in July 2018, the Golan Heights was arguably the main item Putin could offer Trump to discuss in terms of US-Russia cooperation on Syria.

“The south of Syria should be brought [in]to full compliance with the treaty of 1974 … about separation of forces of Israel and Syria," Putin said back then. "This will bring peace to [the] Golan Heights, and bring more peaceful [relations] between Syria and Israel, and also provide security for the State of Israel. Mr. President [Trump] paid special attention to the issue during today’s negotiations."

The Russian proposal was well-received in Israel and at the time was interpreted as yet another message to Iran to pull its forces and allied militias back from the border with Israel.

“We managed to agree on some aspects on Syria,” Putin later told Russian Channel One.

“In particular on the southern de-escalation zone near the Golan Heights, with full consideration of Israeli interests — and we also earlier discussed this with our Iranian partners. So we are on the right track in regard to fixing the situation in a broader sense, not just Syria.”

In a bid to further promote this proposal, Russia deployed its military police along the Bravo line that later enabled UN observers to return to their own mission to monitor the cease-fire and separation of the forces.

Now, with the United States recognizing Israeli sovereignty over the Golan Heights, the “security buffer” between Israeli and Syrian/Iranian forces that Moscow sought to establish may be put into question, raising risks for a direct collision of enemy forces.

Perhaps the biggest fallout for Russia’s own interests in the situation concerns the Crimean Peninsula. In 2014, when Russia took over Crimea from Ukraine — in what Moscow viewed as a “historical reunification,” while most of the world saw it as an annexation — the greatest criticism of Putin’s actions, which led to harsh anti-Russian sanctions, was Moscow’s blatant move to unilaterally redraw state borders in violation of established norms and agreements.

Shortly after Trump's announcement of his decision, Secretary of State Mike Pompeo denied that US recognition of Israeli sovereignty over the occupied territories is a “double-standard policy."

"What the president did with the Golan Heights is recognize the reality on the ground and the security situation necessary for the protection of the Israeli state. … It's that simple," Pompeo told Sky News.

“We, at least, held a referendum in Crimea that showed that the overwhelming number of people there wanted to be part of Russia," sneered a senior Russian official in conversation with Al-Monitor. "What’s the deal with the referendum in the Golan Heights? And, by the way, are we all now going to join forces and sanction America for its decision?”

Israel’s own position on Crimea, as reflected in the UN voting on respective resolutions, was often defined by the current moment in relations with Russia. In March, the Israeli delegate was absent during the UN vote condemning Russia’s annexation of Crimea. The move sparked criticism by then-Secretary of State John Kerry and approval from Moscow, which saw it as an act of support by Israel.

Yet the latest vote on the issue on Dec. 17 saw Israel vote in favor of two UN General Assembly resolutions urging Russia to withdraw forces from Crimea. Earlier that month Israel supported another Ukraine-sponsored resolution condemning Russian human rights violations in Crimea and labeling Russia an "occupying force" on the peninsula. The move came amid bad blood between Russia and Israel over the downing of the Russian spy aircraft in Syria, in what the Russian Defense Ministry called an Israeli provocation.

Some in Moscow believe, however, Russia is unlikely to appeal to the precedent with the Golan Heights to defend its own position on Crimea over concerns of antagonizing Israel. Yet the situation around the Golan Heights weakens the reasoning of those who opposed Russia’s takeover of Crimea. It may also create some leverage for Moscow in its own private deliberations with Europeans over sustainability of sanctions over Crimea.