How Syrian war settlement could impact US decision on Golan Heights

Will the United States recognize Israeli sovereignty in the Golan after the war in Syria? 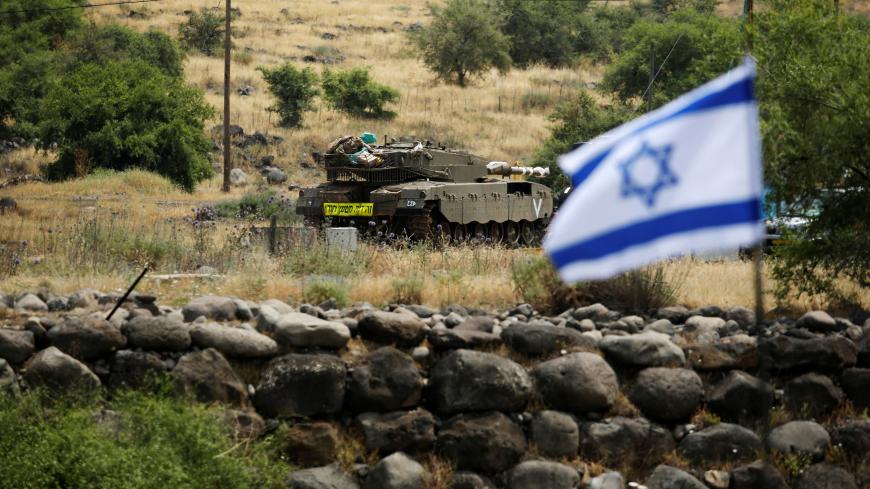 An Israeli tank is seen near the Israeli side of the border with Syria in the Israeli-occupied Golan Heights, Israel, May 9, 2018. - REUTERS/Amir Cohen

As signs of the end of the civil war in Syria loom, the Syrian residents of the Golan Heights are expressing concerns. The small Arab population that has remained in five small villages in the Golan Heights is worried that the residents could become victims of postwar wheeling and dealing between regional and international powers.

Nizar Ayoub, the director of the Al-Marsad Arab Human Rights Center in the Golan Heights, told Al-Monitor that the US recognition of Israeli sovereignty over the occupied Golan Heights is certainly a possibility. “In my opinion, US recognition is possible, but it has to do with the Syrian situation. If Syria is a united country, this would be more difficult; if Syria is divided into three zones as is happening now, this could happen.”

Nevertheless, Ayoub believes that if it happens, people in the Golan Heights will speak out loudly. “If there is a serious move or a decision in this regard, people will speak out. But the reality is that the postwar situation in Syria is key. If Syria is seen as a failed and divided state, this would be a possibility.”

Salman Fakhreddine, a Golani political activist and researcher, told Al-Monitor that there is a clear relationship between the US decision and the current talk about the occupied Golan Heights. “After what happened in Jerusalem and the move of the embassy, there is no way to predict what US President Donald Trump might do.”

However, Ayoub, a resident of the village of Majdal Shams in the occupied Golan Heights, believes that nothing will change on the ground. He told Al-Monitor, “No matter what is said and acted upon regarding the Golan Heights, nothing will change. The occupation will not go away. The recognition of the occupiers as sovereign on our land will mean that the UN charter and international resolutions are worthless.”

Political observers seem to think that the US recognition of Israeli sovereignty over the Golan Heights is a faraway possibility. Ofer Zalzberg, a senior researcher with the International Crisis Group, told Al-Monitor that he is doubtful that any change will occur regarding the status of the Golan Heights. “I really don’t think this issue is on the table. A close reading of the recent events shows that this idea is far-fetched. US Ambassador David Friedman was [reportedly] annoyed at this issue with his Israeli counterparts.” Zalzberg pointed out that Russian President Vladimir Putin stressed at the Helsinki summit the importance of the 1974 Separation of Forces agreement and UN Security Council Resolution 338.

Friedman is reported to have said last month that Israeli officials were “ungrateful” by demanding that Washington recognize Israeli sovereignty over the Golan Heights following the Jerusalem decision.

That the Golani people are worried is not without basis. A pro-annexation group, the Coalition for the Israeli Golan headed by former Israeli Cabinet Secretary Zvi Hauser, was established last year with this issue in mind. According to its website, “The Coalition for the Israeli Golan is a non-partisan, Israeli NGO [nongovernmental organization], founded in 2017 to promote international recognition of Israel’s sovereignty over the Golan Heights.”

Furthermore, the US Congress held a hearing July 17 to discuss this very same issue. Ron DeSantis, the chairman of the Senate Subcommittee on National Security, called on witnesses and the Trump administration to recognize Israeli sovereignty over the occupied Golan Heights.

Aaron David Miller, a former adviser to US Republican and Democratic administrations, told Al-Monitor that such US recognition of Israeli sovereignty over the Golan Heights is unlikely. “Israelis, Russians and Americans have accepted that Syrian government control will block Iran from coming close to the borders on the Golan with Israel. I don’t think this administration would complicate the [Syrian President Bashar al-] Assad agenda, because he will use it to hammer Americans, and frankly this wouldn’t serve anyone’s purpose.”

Miller, who is currently the vice president for new initiatives at the Woodrow Wilson International Center for Scholars, conceded that Trump is unpredictable and may use this to push his “deal of the century.”

He added, “Jared Kushner’s plans might be announced in September, and if Trump finds it necessary to sweeten the pot for Netanyahu, he may consider recognizing Israeli sovereignty.”

Khalil Jahshan, the executive director of the Arab Center Washington, has similar worries about the unpredictability of the US president. Jahshan told Al-Monitor, “With this administration, everything is possible. The question is what the Israeli agenda is.”

Jahshan, a Palestinian American political analyst, argues that the current US leadership has abandoned traditional positions and international commitments. “The US will easily endorse recognition of Israeli sovereignty on the occupied Golan because they don’t look at occupation the way previous administrations did. This applies to their view of the occupation of Palestine and it was clear regarding the Russian occupation of Crimea.”

As the violence in Syria appears to be ending, the tumultuous Middle East is moving into newly unchartered territory. Major regional and world powers that have invested money and blood into the conflict will unlikely remain idle as certain powers attempt to exploit the end of the war to their strategic advantage. The Syrian conflict has too many players, including a number of victorious ones, who will not allow one side to run away with prizes to the detriment of all the others.