Congress calls on Trump to recognize Israeli sovereignty over Golan

After President Donald Trump’s recognition of Jerusalem as Israel’s capital, congressional Republicans are rallying around the Netanyahu government’s next big ask. 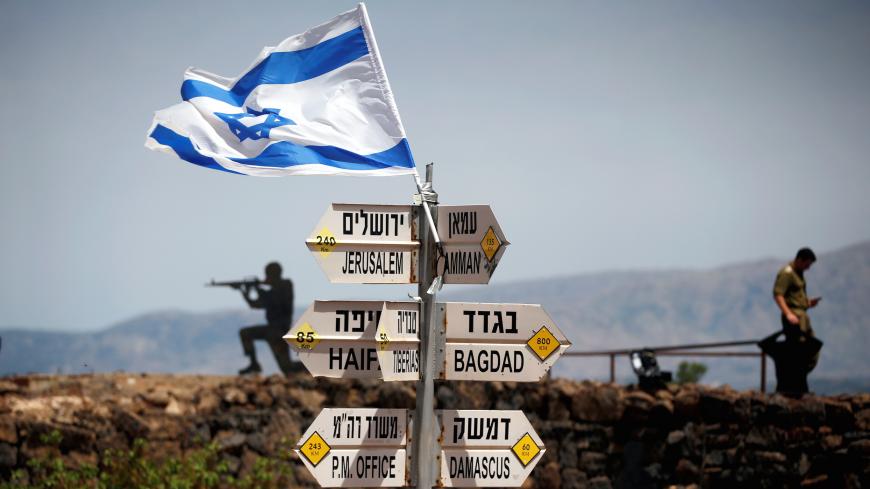 An Israeli soldier stands next to signs pointing out distances to different cities, on Mount Bental, an observation post in the Israeli-occupied Golan Heights that overlooks the Syrian side of the Quneitra crossing, Israel, May 10, 2018. - REUTERS/Ronen Zvulun

President Donald Trump handed Israel a significant win when he recognized Jerusalem as Israel’s capital and relocated the US Embassy there.

Now Republican lawmakers from his own party are putting the pressure on the administration to recognize Israeli sovereignty over the Golan Heights. Israel captured the territory from Syria during the Six-Day War in 1967 and formally annexed it in 1981.

“It would recognize the reality that the Golan Heights is part of Israel and is vital to its national security,” said Rep. Ron DeSantis, R-Fla., during a hearing of the House Oversight panel on national security he convened today to muster support for the move. “This is a policy that the president should implement and all members of Congress should support.”

The move comes as Israel is raising concerns about international moves to return the Golan Heights to Syria as Bashar al-Assad’s foes gradually acknowledge that he is unlikely to be driven from power.

“What has changed today is that with the imminent victory of the forces of President Bashar al-Assad in the sector of south Syria, new diplomatic initiatives by outside actors cannot be ruled out,” Dore Gold, a former director-general of Israel’s Foreign Affairs Ministry and ambassador to the UN who now heads the Jerusalem Center for Public Affairs, wrote in his written testimony to the subcommittee. “US recognition of Israeli sovereignty over the Golan Heights would constitute the fulfillment of a series of previous diplomatic assurances given to Israel by past administrations.”

US recognition of Israel’s annexation of the Golan Heights would have little immediate impact on the ground. But some legal scholars and Democratic critics believe that recognizing the annexation would set a precedent for Israel to do the same in the West Bank.

“You cannot convert occupied territory and incorporate it into your national territory through occupation,” said Geoffrey Corn, an international law professor at the South Texas College of Law - Houston and a former army officer. “There has to be some peace agreement with settlement,” Corn added.

“There’s increasing momentum on the right in Israel to just give up on the two-state solution, annex the West Bank and allow the areas that are currently under Palestinian quasi-sovereignty to continue to function that way,” added Corn. “If that’s your ultimate goal in the West Bank, once the United States recognizes what you’ve done in the Golan Heights, it contributes to that momentum.”

Prime Minister Benjamin Netanyahu asked Trump to recognize Israeli sovereignty over the Golan Heights last year after former US President Barack Obama rebuffed his request in 2015. In recent months, the Israeli government has redoubled its efforts. Israeli Intelligence Minister Yisrael Katz noted in May that the Golan Heights is currently “topping the agenda” with the United States.

When asked if Trump is open to recognizing the occupied territory as part of Israel proper, a White House spokesperson simply said, “There has been no change in our position on the Golan Heights.” The Israeli Embassy did not respond to Al-Monitor’s request for comment.

“At some point there’s nothing left to negotiate from the Israeli point of view, and I don’t know if that’s good for the Palestinians or the Israelis and I don’t think it’s good for US interests either,” Rep. Gerry Connolly, D-Va., a House Foreign Affairs Committee member, told Al-Monitor. “I think it’s just another death blow to the peace process.”

However, Connolly also warned against returning the Golan Heights to Syria.

The annexed territory serves as invaluable strategic high ground a mere 40 miles from Damascus. As forces loyal to the Bashar al-Assad regime sweep up the remnants of the southwest Syrian opposition, the Golan Heights’ geostrategic importance has become even more prominent. The presence of Iranian-backed militias, including Hezbollah, fighting alongside regime forces has stoked fears of a direct confrontation with Israel.

“Just think how crazy it would be to say that Israel should give the Golan to Assad or some of its proxies,” DeSantis said at Tuesday’s hearing. “It would be absolute madness.”

But in 2010, before the outbreak of war in Syria, Israel contemplated doing exactly that. Netanyahu and Assad entered secret negotiations over the territory, and the Israelis were reportedly prepared to return the Golan Heights to Syria if Damascus ended its ties with Iran and Hezbollah.

“No political party in Israel could ever do it,” said Corn. “The Israeli population on the northern border suffered tremendously when Syria had the Golan Heights.”

Corn noted that Netanyahu’s renewed determination to secure US support for the Israeli annexation proves that the prime minister has abandoned the idea of abandoning the heights.

“It reinforces Israel’s position that this is not an issue that’s ever going to be on the negotiating table,” he said.

Despite the political implications, Trump’s decision is unlikely to significantly change the situation on the ground one way or the other.

“Realistically, I don’t see how it changes much in terms of the status quo,” a House aide told Al-Monitor. “Israel will just get more criticism from the international community at the UN and stuff like that because it is still the disputed territory. But I would think it would just be more of the same we saw with the [US] Embassy move.”