Republicans push to lock in Trump’s shift on Golan Heights

After President Donald Trump announced his intention to recognize Israeli sovereignty over the Golan Heights, Republicans are pushing a bill that would make it permanent US policy. 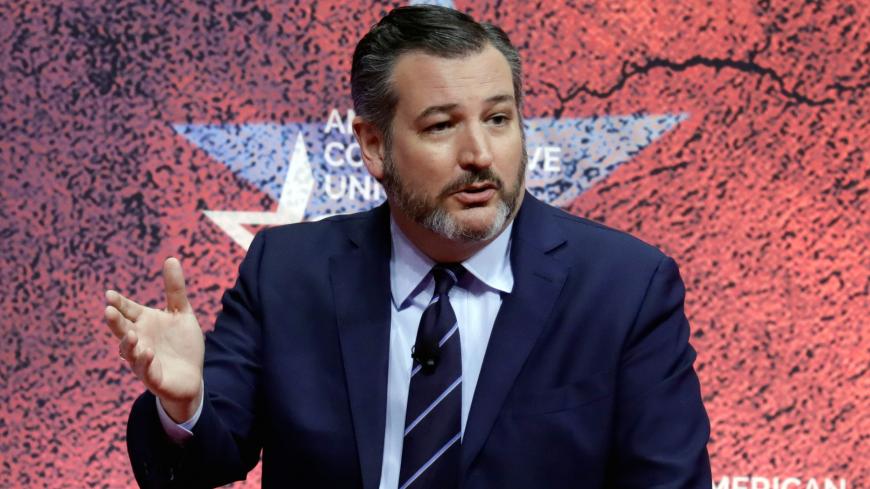 President Donald Trump announced today that “it is time” for the United States to recognize Israeli sovereignty over the occupied Golan Heights. Now Republican lawmakers are scrambling to lock in the directive as permanent US policy.

“We applaud the president for formally recognizing Israel’s sovereignty over the Golan Heights, an acknowledgment that enhances the national security of both Israel and the United States,” Sens. Ted Cruz, R-Texas, Tom Cotton, R-Ark., and Rep. Mike Gallagher, R-Wis., said in a statement. “At a time when Israel’s border is threatened by Iranian forces and their proxies in Lebanon and Syria, including by Hezbollah’s rockets, armed drones and newly discovered terror tunnels, this recognition will be great news for our ally and its right to self-defense.”

They called on Congress to pass legislation that would formally “recognize Israel’s sovereignty over the Golan Heights.” Identical bills in the Senate and House introduced by Cruz and Gallagher would also include the Golan Heights as part of Israel in any spending and trade bills while greenlighting joint scientific, industrial and agricultural projects in the occupied territory.

Sen. Lindsey Graham, R-S.C., a lead co-sponsor of the Cruz bill, also urged Senate leadership to take up the legislation. The senator vowed to push Trump on the issue after a photo op with Netanyahu in the Golan Heights earlier this month.

“I hope and believe there is widespread bipartisan support for this proposal,” Graham said in an emailed statement. “Congressional passage would reinforce President Trump’s decision as United States policy.”

Trump announced the shift during Secretary of State Mike Pompeo’s visit to Jerusalem.

“President Trump has just made history. I called him. I thanked him on behalf of the people of Israel. He did it again,” Netanyahu said during a meeting with Pompeo. “The message that President Trump has given the world is that America stands by Israel.”

Israel captured the territory from Syria during the Six-Day War in 1967 and formally annexed it in 1981.

Trump announced the new policy by tweet. He is expected to formally recognize the Golan Heights as part of Israel next week, when he hosts Prime Minister Benjamin Netanyahu at the White House. Still, a future president could always reverse the policy.

“Now we need Congress to codify this policy,” Neil Strauss, the digital director for the Republican Jewish Coalition, told Al-Monitor. “To do so shows American strength and adds certainty to the issue. We must make sure that future administrations can’t easily throw Israel’s safety into flux.”

Strauss said the Republican Jewish Coalition is working closely with Cruz, Cotton, Gallagher and the bill’s other co-sponsors “to make sure this bill gets passed.”

“If Democrats are committed to bipartisan support for Israel, as they claim, they will get behind this effort,” he said.

For now, the legislation remains a partisan endeavor. The Senate bill has seven co-sponsors and the House bill 23, all of them Republicans.

After Netanyahu began lobbying Trump on the issue last year, Republicans on the House Oversight Committee held a hearing urging the president to declare the Golan Heights part of Israel. Democrats on the panel argued that they supported Israeli control over the occupied territory, but that declaring formal Israeli sovereignty would undermine prospects for Israeli-Palestinian peace.

Still, at least one key Democratic leader has already offered his support for Trump’s decision.

“I think that Golan Heights is part of Israel and should remain part of Israel for strategic purposes,” House Foreign Affairs Chairman Eliot Engel, D-N.Y., told Jewish Insider in January.

Christians United for Israel also praised Trump’s decision, as well as Cruz and Gallagher for introducing the legislation.

“It’s now clear that the consensus among Israel’s allies in Washington is that the US should recognize Israeli sovereignty over the Golan Heights and we look forward to that consensus being reflected in US policy,” Sandra Parker, chairwoman of Christians United for Israel, said in a statement.

The American Israel Public Affairs Committee (AIPAC) did not lobby on this issue last year when the bills were first introduced, according to the latest accessible lobbying filings. Still, the influential pro-Israel lobby endorsed Trump’s announcement, calling it “a dramatic change in American policy” and praising “his leadership on this issue.”

Netanyahu will address AIPAC’s annual conference during his visit to Washington next week.