Some Israeli senior officials believe the Trump administration might agree to recognize Israel’s sovereignty over the Golan Heights. 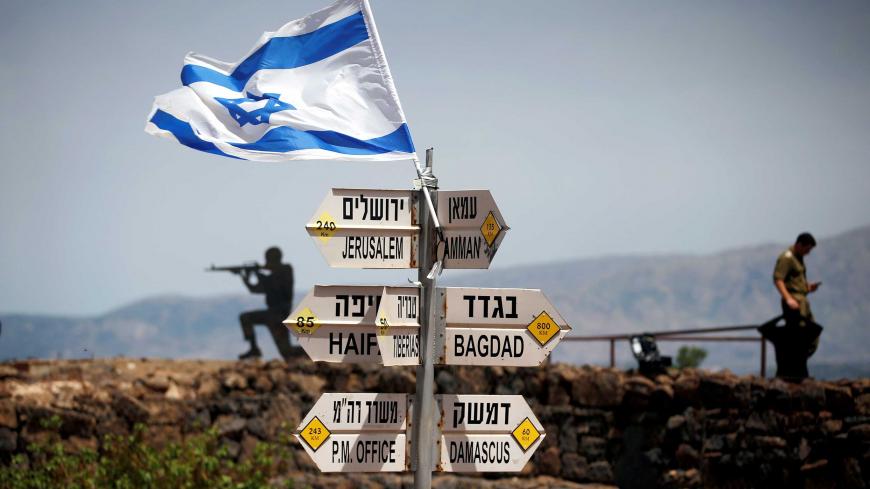 An Israeli soldier stands next to a signpost on Mount Bental, an observation post in the Israeli-occupied Golan Heights that overlooks the Syrian side of the Quneitra crossing, May 10, 2018. - REUTERS/Ronen Zvulun

There is cautious optimism in Jerusalem over the chances that the Trump administration will agree to recognize Israeli sovereignty over the Golan Heights. Apart from Minister of Intelligence Yisrael Katz, who insinuates as much in recent interviews, no Israeli source is willing to risk a public guess. Still, several senior political sources have told Al-Monitor that there is a good chance it will happen. One senior Cabinet member said on condition of anonymity, “We have presented this option to the Americans on all levels, including during a conversation between Prime Minister Benjamin Netanyahu and President Donald Trump. This is a one of a kind historic opportunity, which we will not have again.” A senior diplomatic source in Jerusalem confirmed on condition of anonymity, “It’s on the table, both for the Americans and for us. It is Israel’s supreme strategic interest right now, and what is remarkable about it is that the move comes with almost no price attached.”

Another encouraging sign is the change in attitude of Netanyahu over reaching some arrangement or other with Hamas in the Gaza Strip, but that is worth an article of its own. Over the past few weeks, Israel has been considering several options for an arrangement, which would ease the closure and reduce pressure on Hamas, in exchange for a complete stop to the firing of rockets and digging of attack tunnels from Gaza into Israel, and the return of the bodies of Israeli casualties and of civilians being held by Hamas. Netanyahu is aware that the waves of Palestinians charging the fence along its southern front make it difficult for the US administration to continue with its wholehearted and unequivocal support of Israel. In response, Netanyahu’s government is willing to go a long way toward Trump in order to gain continued, comprehensive support along the northern front, which, according to Netanyahu, is Israel’s real front. Of course, this involves the Golan Heights.

The original proponent of the idea is Zvi Hauser, who was Netanyahu’s Cabinet secretary from 2009 to 2013. Hauser first proposed the idea in 2013. “There’s an enormous elephant in the room, and I’m glad that people are starting to pay attention to it now,” Hauser told Al-Monitor May 26. “The Golan Heights make up just 1% of Syria’s territory. They have been controlled by Israel for over 50 years, and Israeli law has been applied to the Golan Heights for 36 years now [since December 1981]. There is no better option for the Golan on the horizon than the Israeli option. The only other alternatives are the Islamic State or Iran, and everyone who should know that does."

Hauser first proposed raising the idea during the final two years of the Barack Obama administration. He articulated it when the security team led by Gen. John Allen worked together with their Israeli counterparts to outline Israel’s security interests, in advance of the formulation of an American “security plan.” Hauser suggested that their work should not stop at al-Hamma — in the southernmost part of the Golan Heights, where the borders of Israel, Syria and Jordan converge — but continue northward, and define the Golan Heights as a first-rank Israeli strategic interest. It did not happen. Later, after world powers inked the nuclear agreement with Iran, some people suggested to Netanyahu that he put a stop to his personal campaign against the agreement and reach a “deal” with the Americans instead. One of the components of such a deal would be American recognition of Israel’s annexation of the Golan Heights.

“It would be logical and necessary,” Hauser noted. “After all, there was no debate that the nuclear agreement did not provide a response to conventional Iranian aggression, and for Israel, this aggression focuses mainly on the Golan Heights.”

The problem was that Netanyahu refused to give up his campaign against the agreement even after it was signed, and the opportunity passed.

Now Israel is seemingly facing a golden opportunity, which is unlikely to repeat itself again. “President Trump has been overturning agreements without as much as beating an eyelash,” a senior diplomatic source in Jerusalem told Al-Monitor on condition of anonymity. “He canceled the nuclear agreement, even though Iran has been meticulous in fulfilling its part of the agreement, which is unprecedented. That's why it will be feasible to foresee Trump partnering with us on the Golan issue.”

Katz is the locomotive who is pushing this effort full-steam ahead, especially among the public. Katz dropped a bombshell May 23 when he announced in an interview with Reuters that there is a good chance that the Americans will recognize the Golan Heights as Israeli territory, and that this would be a powerful response to Iran and its efforts to establish a front against Israel in Syria. According to Katz, such a move would “punish” Iranian aggression and send a clear message to Syrian President Bashar al-Assad, who has been allowing Iran to turn his country into a base for operations against Israel. All of this would bolster Israel’s ability to defend itself.

Another senior Israeli Cabinet member, who asked to remain anonymous, told Al-Monitor, “President Trump understands the importance of strategic depth. As far as Israel is concerned the Golan Heights are vital strategic depth. In the last clash with Iranian forces over the Golan Heights, they fired 32 rockets into Israel, but only four of them actually landed in Israeli territory [they were shot down by the anti-missile defense system Iron Dome]. Most of the others landed in Syrian territory. Imagine what would have happened if these rockets had been fired from the Golan Heights near the Sea of Galilee, at Israeli towns and villages in the Galilee.”

Another reason Israel hopes to gain American recognition is based on the fact that Israel’s control of the Golan Heights does not involve occupation of another people, as is happening in the West Bank or as happened in Gaza with millions of Palestinians. Although the House of Representatives shelved a proposal May 26 by Rep. Ron DeSantis, R-Fla. — that the United States recognize Israeli sovereignty over the Golan Heights — Israel believes that the current situation in Syria and the combination of current circumstances are to their advantage.

“Over 700,000 civilians have been killed in Syria in the past few years,” another senior diplomatic source in Jerusalem told Al-Monitor on condition of anonymity. “There are 14 million refugees. The country will not recover for at least three generations, and even if Assad does manage to restore stability to his regime, genuine reconciliation is impossible there. The only viable option for the Golan Heights is Israeli sovereignty. Apart from the Shiite axis, no one in the Middle East would shed a tear if the United States recognizes a situation that has existed de facto for the last half century now.”