Prime Minister Benjamin Netanyahu hopes that naming a Golan Heights settlement after President Donald Trump will flatter the American leader into recognizing Israel’s sovereignty over parts of the West Bank as well. 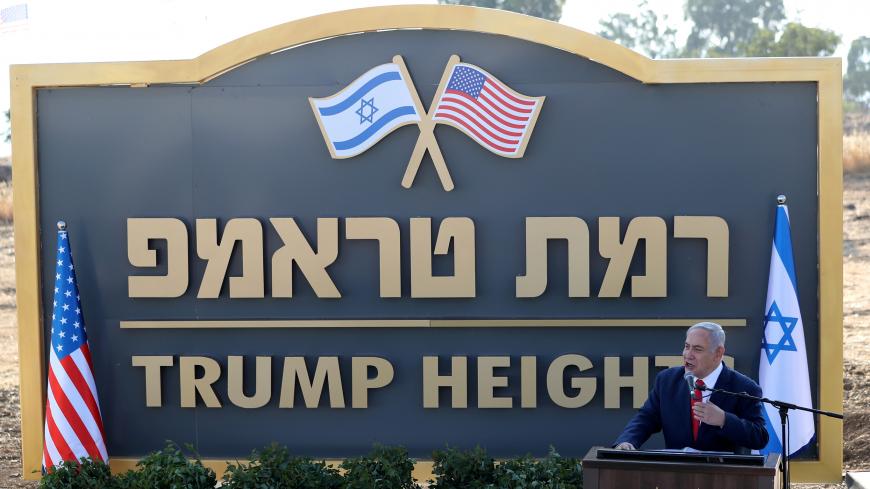 In a special June 16 session on the Golan Heights, Israel’s government affirmed the establishment of a new locality named after US President Donald Trump. During the session, a giant sign was unveiled reading “Trump Heights” in large gold letters topped by the American and Israeli flags. Prime Minister Benjamin Netanyahu and US Ambassador to Israel David Friedman clapped their hands enthusiastically.

“President Trump is a very great friend of our country,” Netanyahu said in an emotional speech. “A friend who did things for the country that were not done in the past and should have been done in the name of justice and truth.” Friedman also seemed deeply touched. In his speech, he said that Israel and the United States are becoming closer and cooperating more and that these developments are important to Israel, to the United States, to the region and to the entire world.

No cornerstone was laid for the new locality during the ceremony because no one knows exactly where Trump Heights will be established. The proposal submitted to the government reads, “Out of our great appreciation for the activities of the 45th US President Donald Trump on behalf of the State of Israel in a broad variety of spheres, and as a way to express our thanks for American recognition of Jerusalem as the capital of the State of Israel and recognition of Israeli sovereignty on the Golan Heights, initiatives that were led by President Trump, it was decided to initiate the establishment of a new communal locality in the Golan Heights to be named ‘Trump Heights.’ … It will probably be situated in the region of the Kela locality.”

The timing was very appropriate for Netanyahu, who needs to mollify the Israeli right just before another round of elections and political initiatives after he was unsuccessful in assembling a coalition after the April 9 elections.

Even prior to the festive affair in the Golan, newly minted Knesset member Zvi Hauser (Blue and White) predicted that the event would see pandering along the lines of the Israeli antics in the movie "Sallah Shabati." Hauser, who formerly served as Netanyahu’s cabinet secretary and is now chairman of the Coalition for the Israeli Golan, tweeted that the decision to name the site after Trump was a "dummy resolution."

In Ephraim Kishon’s Oscar-nominated 1964 movie, the Jewish National Fund raises funds from rich Jews overseas to plant forests in Israel that will be named after the donors. When the various philanthropists come to see “their” forests, they are all shown the same site, with the signs switched to match the donors.

Even though the ceremony this week was not conducted precisely where Trump Heights is supposed to be built, at least the site bears a magnificent sign. It seems that Israel is seeking not only American money, but unconditional support for the controversial plans of the right-wing government. Trump, who may not be aware that Trump Heights has a long way to go before a village is really there, tweeted, “Thank you Mr. Prime Minister, a great honor!"

According to 2015 data, a total of only 47,000 residents live in the Golan Heights localities, including non-Jews. The public is not racing to the Golan Heights. Only about 7,000 residents inhabit the Golan’s largest Jewish locality of Katzrin, and only 25 real estate transactions took place there in the past year. So who will populate the new locality named after the American president, once appropriate land is found, budgeting is approved and building permits are dispensed?

Although the Golan ceremony was organized in haste, it had an eye on the future. An educated guess is that Netanyahu and his ministers are already preparing the ground for the next step: American recognition of annexation of West Bank territories.

What once seemed crazy and impossible becomes more real with every passing day. Friedman said June 8 that Israel has the right to annex parts of the West Bank. His words in the New York Times created a storm. Meanwhile, this week Friedman received a significant boost from Trump’s emissary to the Middle East, Jason Greenblatt. At the Jerusalem Post's annual conference held June 16 in New York City, Greenblatt said, “I will let David’s comments stand for themselves." The man who crafted Trump’s peace program backed up the ambassador to Israel's support for annexation of the West Bank.

It is not unreasonable to posit that someone in Netanyahu’s bureau created an initiative that would massage the ego of the American president, who loves to perpetuate his name on all kinds of real estate projects that he establishes or acquires.

Yes, Trump likes to see his name displayed over projects that feature fortitude and strength. But many years will pass before Trump Heights becomes a thriving locality, if ever.