Ahead of presidential elections, Israelis cheering for Trump

Israelis love US President Donald Trump — not only for his diplomatic gestures toward the country, but also for his informal, blunt style. 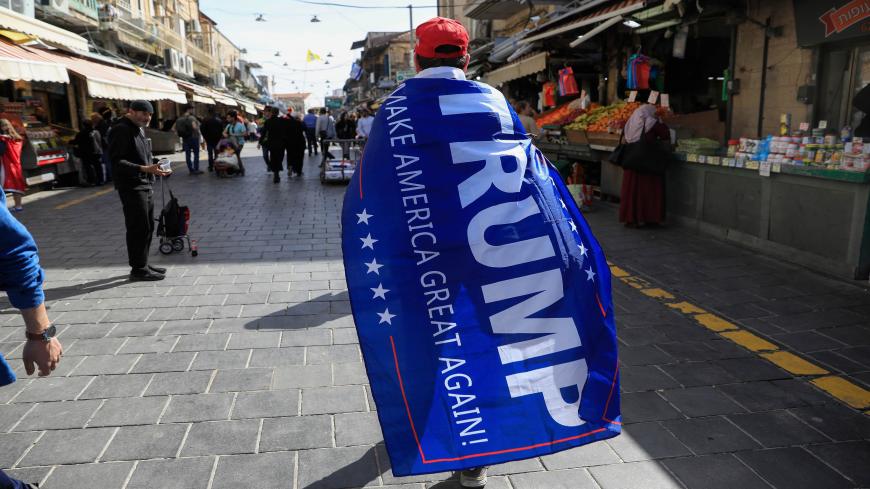 Almost two-thirds of Israelis believe that Donald Trump will be a better president for Israel than his Democratic rival Joe Biden. This finding, which appeared in a poll that was released this week by I24 TV, reflects the support, and in some cases, admiration, that Israelis feel for Trump before the upcoming election. The results also show that Trump’s popularity is not limited to the right or supporters of Prime Minister Benjamin Netanyahu.

Actually, Trump is one of the most popular American presidents in Israel ever. He is certainly more popular than his predecessor Barack Obama, who was considered cold and aloof. Right-wing circles even considered Obama pro-Palestinian. Polls conducted over the last few years show the clear difference in popularity between Obama and Trump, which trend in favor of Trump. So, for example, a poll by the Haaretz newspaper, on July 4, 2018, to mark US Independence Day, found that almost half of Israelis support Trump, while only 19% had a positive view of Obama.

This romance between Israelis and Trump was hardly love at first sight. During the 2016 election campaign, he was considered to be a loudmouth, known mainly for his vast wealth, the towers bearing his name and the scandals surrounding his personal life. In December 2015, Knesset members from the left even signed a petition calling on Netanyahu to prevent Trump from entering Israel during his election campaign. This came in response to his statement that Muslims should be banned from entering the United States. Knesset members from Meretz even called Trump a dangerous racist.

But Israelis quickly learned to admire the “politically incorrect” president. Why not? He showered gifts on Israel, showed warmth to the country and its leaders, and did the impossible, like moving the US Embassy from Tel Aviv to Jerusalem, recognizing Israel’s annexation of the Golan Heights and killing Iranian Gen. Qasem Soleimani, who always managed to evoke Israel’s ire.

Netanyahu’s close personal relationship with Trump after years of crises between him and Obama added to the president’s popularity locally. The climax was, of course, the normalization agreements with the United Arab Emirates (UAE) and Bahrain. Furthermore, Trump’s Jewish son-in-law Jared Kushner, his daughter Ivanka, who converted to Judaism, and their Jewish children won the hearts of Israelis and gained Trump even more support. Plenty of Jewish religious children took to the streets during the Purim festival dressed as Trump.

Israelis really loved US President Bill Clinton. They still look back fondly on what he said at the funeral of assassinated Prime Minister Yitzhak Rabin in 1995: “Shalom, haver” (“Goodbye, friend"). Who can forget Clinton's tears at the event? There was real chemistry between Clinton and Israelis. He spoke directly to them and succeeded in convincing them of his sincere love of Israel. During Netanyahu’s first term as prime minister, in 1996, the crises in his relationship with Clinton actually hurt him. In fact, Netanyahu always used to check Clinton’s popularity in the polls, and it was always very high. A common joke at the time was that if Clinton really wanted he could easily get elected as Israel’s next prime minister.

And yet, it doesn’t take a poll to realize that Trump is even more popular than Clinton among Israelis. In the last year alone, several major cities explored naming streets after Trump. That never happened during the Clinton era.

Last September, the Rishon Lezion city council discussed naming a street in the city after Trump. Reasons included his contributions to Israel, his decision to relocate the embassy to Jerusalem and his recognition of Israel’s annexation of the Golan Heights. Yossi Golan, who heads a neighborhood in the city, and the one who came up with the idea, explained at the time, “Trump won me over as soon as he took two major steps forward on behalf of our country. He moved the embassy to Jerusalem and he recognized Israeli sovereignty over the Golan Heights. I think this merits recognition. He continues to support Israel and advance the peace process. There has never been another US leader like him, who did as much for the State of Israel.”

There are already two main squares in Israel named after Trump. The first, in Jerusalem, is located at the top of the road leading to the US Embassy; the second is in Petah Tikva, where the main city square was renamed Trump Square. The renaming took place in July 2017, at a ceremony attended by Likud ministers that received extensive media coverage. At the event, Mayor Rami Greenberg explained that he decided to go ahead with this gesture since “Israel has never seen a more understanding and supportive [US] president than Donald Trump.”

Then there is the settlement of Ramat Trump (Trump Heights) in the Golan Heights, which was formally approved by the government in June 2020. This was the most important gesture of appreciation for Trump, who did what his predecessors would not do by recognizing Israeli sovereignty over the Golan Heights. Ramat Trump is only the second settlement in Israel to be named for a serving president. The first was Kfar Truman, which was named after the 33rd US president, Harry Truman, who supported the establishment of a Jewish state in 1947. Then, after Israel declared its independence, Truman became the first world leader to recognize the State of Israel.

What is the secret of this president’s appeal? It seems to be a combination of several distinct elements. First and foremost, of course, is all that he has done for the country, which proved his deep ties to Judaism, Zionism and the State of Israel. Then there is his blunt temperament, informal style and his chutzpah, which are well suited to the Israeli temperament. That is why Israelis are so willing to forgive him for all his scandals and embarrassing behavior, including, most recently, his reckless attitude in regard to the coronavirus pandemic.

The upcoming US elections have been receiving extensive coverage on all of Israel’s news channels, not to mention social media platforms. Given that so many polls predict that Biden will win the election, some commentators are now saying that this will be a devastating blow to Netanyahu. After all, many of Netanyahu’s successes can be attributed to his excellent relationship with Trump. Netanyahu makes sure to use every available platform to talk about Trump’s contributions to Israel. He certainly did that this week, when he brought the agreement with the UAE to the government and Knesset for their approval.

Still, as tempting as it is to see Trump’s defeat as a blow to Netanyahu, and perhaps even an omen of his imminent collapse, this is probably exaggerated. Netanyahu will always be able to present himself to the right as the only person who can stand up to a Democratic president and prevent the implementation of any diplomatic plans that would put the settlers and settlements at risk. After all, he was able to do that during the Obama era.