Several Israeli families are preparing to move in to the Trump Heights settlement village in the Golan Heights. 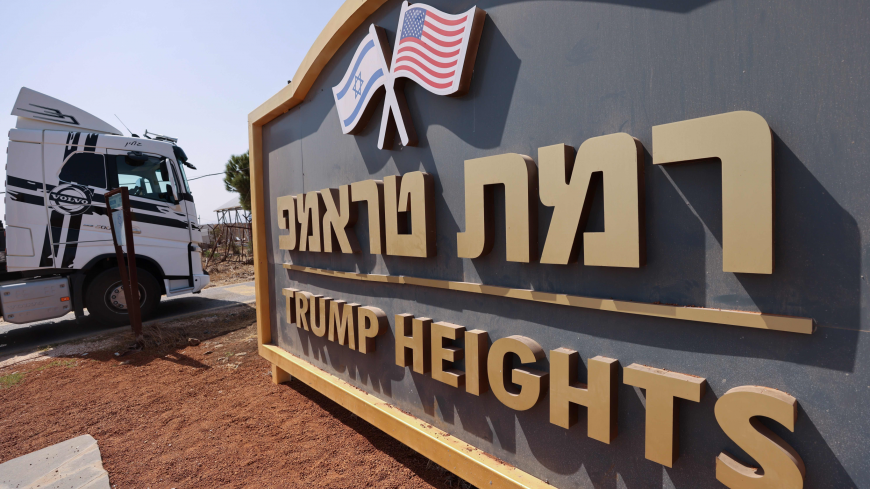 A construction truck enters Trump Heights, a new Israeli settlement in the Israeli-occupied Golan Heights, on Sept. 21, 2020. Trump Heights, or "Ramat Trump" in Hebrew, was inaugurated in June 2019 by Prime Minister Benjamin Netanyahu and US ambassador to Israel David Friedman as a celebration to mark President Donald Trump's recognition of the Golan as Israeli territory. - EMMANUEL DUNAND/AFP via Getty Images

The incoming administration of President-elect Joe Biden will be forced to deal with the implications of outgoing President Donald Trump’s foreign policy. In more than a few cases, Biden may wish to reverse decisions made by his predecessor, but he will be hard-pressed to do so.

When it comes to Israel, the decisions that stick out most include Trump’s decisions to move the US Embassy to Jerusalem and to recognize Israeli sovereignty over the settlements in the West Bank and the Golan Heights, on Israel’s northern border with Syria. Trump’s decision to recognize Israel’s annexation of the Golan Heights sparked renewed Israeli interest in the region. As a symbolic reward for his decision, the government decided to establish a new settlement, Ramat Trump (Trump Heights), named after the outgoing president. The first settlers will be moving in next month. They will be housed in recreational vehicles and other temporary structures until their permanent homes are completed.

Israel seized the Golan Heights from Syria in the 1967 Six-Day War. In 1981, Menachem Begin’s government formally annexed the territory. This unilateral move was not recognized by any country until Trump came along. In March 2019, his administration changed long-standing American policy by recognizing Israeli sovereignty over the region. A proclamation signed by Trump declared, “The State of Israel took control of the Golan Heights in 1967 to safeguard its security from external threats. Today, aggressive acts by Iran and terrorist groups, including Hezbollah, in southern Syria, continue to make the Golan Heights a potential launching ground for attacks on Israel. Any possible future peace agreement in the region must account for Israel’s need to protect itself from Syria and other regional threats. Based on these unique circumstances, it is therefore appropriate to recognize Israeli sovereignty over the Golan Heights.”

Three months later, the Cabinet convened for a special session in the Golan Heights and approved the establishment of a new settlement named for the US president. At that meeting, a huge sign decorated with Israeli and American flags was unveiled at the entrance to the new settlement. Written on it in gold letters was the name Ramat Trump.

The settlement may have had its start as the butt of countless jokes, but it soon became real. Founded in the northwestern corner of the Golan, construction gained momentum after 20 families signed contracts to build homes there. The new settlement is built on what is left of a failed settlement, Beruchim. The five remaining families from Beruchim will join the 20 new families.

This is the first new settlement to be established in the Golan Heights in 29 years. It joins 32 Jewish and four Druze towns and villages in the region. The reason for its founding, apart from being a symbolic gesture of gratitude to Trump, is growing interest in the Golan Heights among Israelis. There are two reasons for this. The first is American recognition of Israeli sovereignty over the contested region; the second is the coronavirus pandemic.

According to the Golan Heights Regional Council, the number of people requesting information about settling in the Golan Heights jumped sixfold in the last year. Golan Shemesh, who runs the local absorption center, said that in 2019 it received about 200 queries, but that now it has no less than 1,200, with many of these interested parties already in the practical stages of signing contracts and selecting plots on which to build.

Most settlements in the Golan are rural, meaning that they consist of single-story homes. Some are primarily agricultural and used to raise crops or cows.

Moli Spiegel, who heads the Engineering Division of the Golan Regional Council, said construction has gained momentum in all of the settlements. As a result, he said, they requested and received permission to expand. He said the growing interest in the region comes as Israelis are showing less interest in urban life and more interest in communities. He said he believes that much of this can be attributed to the coronavirus, which forced people to sequester themselves in their homes. This showed them the disadvantages of living in an apartment. Trump’s proclamation in 2019 offered them renewed incentive to move to the Golan.

Another reason is the cost. Housing prices in Israel are steep, and not just in the center of the country either. The Golan Heights offers large, single story homes of the highest quality at especially low prices. In order to promote the region, the government offers the land for the private houses to sit on for free. In contrast, half a dunam (an eighth of an acre) of land in a rural village in the Judean Hills costs at least $300,000-$500,000. The savings on land alone comes to half the cost of construction. In addition, farmers are offered 60 dunams (about 15 acres) of agricultural land for cultivation (cherries, berries, apples and grapes), twice what it prospective farmers are offered in other parts of the country.

Tzofit and Daniel Biber are one of the first families to join the settlement of Ramat Trump (contracts can only be signed after the acceptance committee of the settlement or the regional council approve it). The Bibers said they are very excited to be part of a new communal village in one of the regions of the country they love most. The couple said they are also drawn to the idea that the population will include both secular and Israeli Jews living together, since this promotes acceptance of the other. While they aren’t particularly happy about the settlement’s name, they are sure that it will succeed. They plan to move into a recreational vehicle in December and to begin construction on their new home in the spring.

The Golan is also home to a minority Druze population of 24,000, most of whom oppose Israeli sovereignty, at least publicly. When Trump formally recognized the annexation, one of these residents, Wahel Tarabieh, told Al-Monitor, “Israeli occupation of the Golan Heights contravenes international law and the resolution of the Security Council, and we will never recognize it. Trump’s declaration is a disaster. It proves that occupation pays off.”

Abbas Abu Awad, head of the Buqa’ata local council, takes a different position. He said, “Following the Arab Spring in Syria, 90% of the Druze prefer Israeli sovereignty. There’s no question here at all. … Supporters of Syrian nationalism are few. … Many [local residents] have family across the fence. They fear that if they support Israel, their families in Syria will be harassed.”

Trump’s legacy may have its fair share of critics, but in Israel and other states in the region, it has numerous supporters, too. Trump brought about real change in the Middle East. The settlement of Ramat Trump in the Golan Heights is a symbolic representation of that legacy.