Interior Minister Ayelet Shaked signed a legal framework to speed development of new villages in the Golan Heights, with a goal of doubling the area's population. 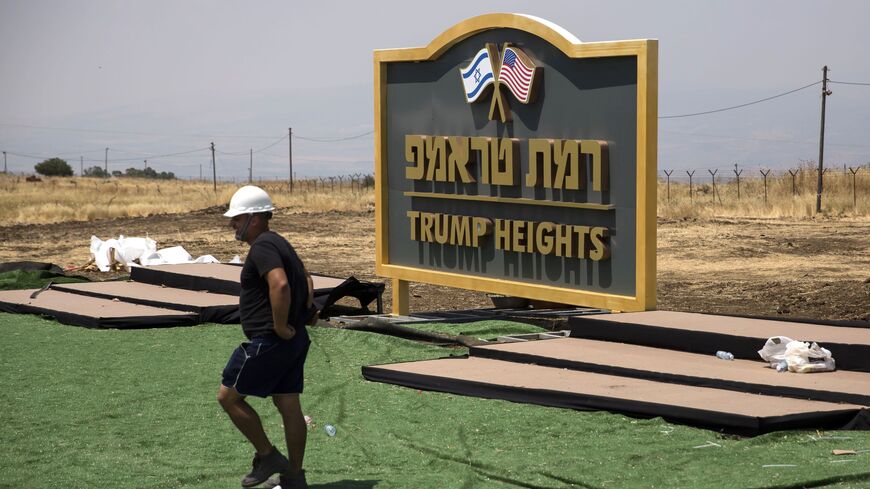 The government of Israel continues bolstering its settlements in the Golan Heights as part of a December 2021 plan to double the region’s population to 100,000 residents by 2025.

The plan charged Interior Minister Ayelet Shaked with establishing a special committee for planning and construction, in order to create new residential neighborhoods at existing communities and plan new villages.

Last week, Shaked took another step in that direction, announcing the creation of a special planning space only for the Golan Heights. Marking 55 years since the conquest of the Golan Heights, on June 2 Shaked signed a decree authorizing a shortened processes for building and expanding settlements in the Golan Heights.

The main goal of the government is clearly diplomatic, to strengthen Israeli presence in a disputed territory. Israel conquered the Golan Heights from Syria in 1967 during the Six-Day War, after Syrian cannons bombarded Israeli towns, and the territory was formally annexed by a government decision in 1981. Since then, 33 villages have been built there, and one city, Katzrin.

Over the years, there were several attempts and indirect negotiations between Israel and Syria to return the Golan Heights, but these did not succeed. The international community has not recognized the annexation, and UN Security Council Resolution 497 determined that the annexation has no international significance. The Syrian civil war, and the presence of Iranian and Hezbollah forces close to the border, have led to clashes on the border and increased Israeli determination to maintain control over the Golan.

Former President Donald Trump broke with the American traditional approach in 2019 by signing a presidential declaration recognizing the Golan Heights as Israeli. The declaration said that “the State of Israel took control of the Golan Heights in 1967 to safeguard its security from external threats. Today, aggressive acts by Iran and terrorist groups, including Hezbollah, in southern Syria continue to make the Golan Heights a potential launching ground for attacks on Israel. … Based on these unique circumstances, it is therefore appropriate to recognize Israeli sovereignty over the Golan Heights.”

Former Prime Minister Benjamin Netanyahu returned the favor with  a new settlement in the Golan named Ramat Trump. The settlement was established in 2020 and now has several dozen families living in trailers, awaiting permanent housing.

The December 2021 decision to double the region's population was made in a government meeting held not in Jerusalem but at Kibbutz Mevo Hamma in the southern Golan Heights. Minister Esawi Frej of Meretz boycotted the meeting, but other Meretz ministers attended. After a debate, the decision was passed to allocate a billion shekels in order to double the area’s population within five years.

“The government has recognized an ideal momentum to invest in the Golan Heights," a senior minister told Al-Monitor at the time on condition of anonymity. "Since this is not the West Bank, which is a subject of dispute among various components of the government, it was possible to recruit the support of all the parties for the decision. Despite differences of opinion among Meretz Party members regarding support of the plan, Meretz ministers ended up signing it.”

At the start of the December 2021 meeting, Prime Minister Naftali Bennett said that “a combination of circumstances has led us today to a dramatic government decision to channel considerable resources, around one billion shekels, to strengthen communities on the Golan Heights. … The Golan Heights are Israeli; this is self-evident.”

According to plans, 7,300 housing units will be constructed in the Golan Heights within five years. Two new villages will be established (Asaf and Matar), each with 2,000 housing units. Further investment will be toward transportation infrastructure, updating the medical system in the region, and developing two advanced sectors, which are actually inter-related.

The first is the agritech industry/smart agriculture, which includes developing unique greenhouses and advanced water management systems. The second is to turn the Golan into the capital of innovative climate and energy technologies. Bennett would like to see these two industries creating 2,000 jobs in the Golan. Dozens of electricity-generating wind turbines are already located in the area, and the intent is to invest in research and development of renewable energies and technologies like wind and solar.